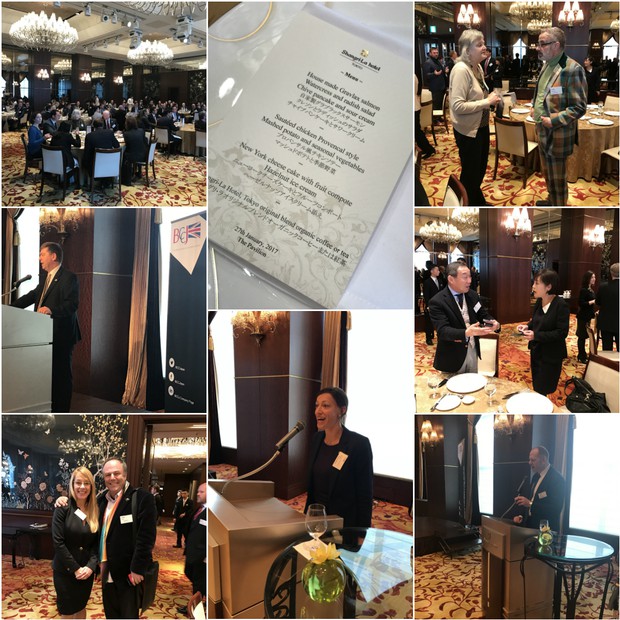 On 27 January 2017 at the Shangri-La hotel over lunch, BCCJ members had the opportunity to meet the new UK Ambassador to Japan, Paul Madden CMG, to hear about his previous experiences and what he hopes to achieve during his time in Japan.

The honour of a post in Japan
The ambassador opened his speech by talking about the strong impression Japan had left on him the first time he visited in 1982 on a 2-week study tour after winning an essay contest organized by the Japanese Ministry of Foreign Affairs. “This changed my life,” he said. He developed a special interest in Japan and after working at the Department of Trade and Industry as head of the Japan team from 1980 to 1987, he was posted to Tokyo for the first time as First Secretary Economic from 1988 to 1992. “I am aware of the many distunguised colleagues who have filled this posting before me and I am very honoured to have been given this wonderful opportunity as I have a deep affection for this country.”

How Japan has changed
His Excellency shared anecdotes and personal stories with the audience about his career with and noted that several things had changed since last being in the country. “Japan has had seventeen prime ministers since I was last posted here!”. He continued, “Returning to Japan after a long absence, I have also noticed that consumers now have more access to imported goods and more free time, but there are fewer expats. I believe Tokyo 2020 will be a good way of attracting more people back.”

UK-Japan relationship and business
The ambassador spoke of Japan as the UK’s most important security partner in Asia and emphasised Japan’s role in the UN and peacekeeping in South Sudan. “Japan is playing a greater role in world affairs and with increased tensions in the world, we appreciate the strong relationship between our two countries.” The ambassador expressed his commitment to promoting and extending economic relations and trade between the UK and Japan and highlighted the opportunities in inward investment, nuclear, exports, fintech, and defence.

Touching upon the uncertainty caused by Brexit, Ambassador Madden emphasised that the UK government is listening carefully to Japanese business representatives and assessing their feedback meticulously. “Depending on the industry, Japanese companies have expressed different concers, but the response to the UK government’s approach has been positive. Ten ministers visited Japan in 2016 to assess the situation to listen and report back the concerns of Japanese companies.”

“Prime Minister May’s speech outlined twelve clear British objectives, emphasising that the UK is not facing cliff edge, but that a smooth and orderly Brexit will be implemented.”

Science, Innovation, and Education
Ambassador Madden highlighted the work of the Department for International Trade at the British Embassy and the establishment of a new Prosperity Team focussing on new opportunities between Japan and the UK  in science and innovation. His Excellency also emphasised the importance of education exchange between the two countries and the aim to encourage more Japanese tourists to visit the UK.

Finally, the ambassador reminded the audience that the embassy was there to support British citizens in Japan whether through consular services or with FCO travel advice. “I very much look forward to working more closely with the BCCJ and to promoting business between the UK and Japan.”