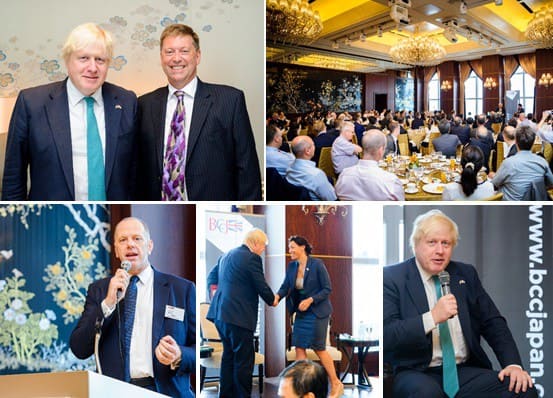 During his recent diplomatic visit to Japan, Foreign Secretary Boris Johnson addressed BCCJ members about expectations for a post-Brexit UK, ongoing Japan–UK relations, and the potential of the Tokyo 2020 Olympic and Paralympic Games. Held at the Shangri-La Hotel Tokyo on 21st July, the event marked Mr Johnson’s second speech to the BCCJ, the first being in October 2015 in his capacity as Mayor of London.

Mr Johnson began by expressing his joy both at being welcomed back to the BCCJ and to Japan, a country he described as “incredible.” He thanked BCCJ members for all they do to promote “the fantastically special political, commercial and economic relationship with Japan.”

It is one that continues to develop apace. According to Mr Johnson, the UK saw some 2,200 individual investments in the past year, the highest number to date. At the same time, he added, Japanese investment was prominent: telecoms firm SoftBank closed the deal to buy British microchip producer ARM Holdings, and new Nissan models are being made at the firm’s plant in Sunderland.

As Japan and the UK are facing many similar issues, such as an ageing society, Mr Johnson pointed out the potential of working together to find solutions, demonstrated by ongoing successful collaboration among Waseda, Birmingham and Loughborough universities in the field of robotics.

Mr Johnson assured the audience that the government had a working majority of MPs, 85% of whom were elected on a manifesto to achieve Brexit.

“The problem with the election is that it brought Brexit back into the centre of the political debate,” he said. “We need to get it done, get on with it, build a strong, successful new partnership with the EU, and use this moment to build even stronger relations with the rest of the world.”

Encouraging BCCJ members to “be in good cheer,” Mr Johnson said that the UK remains committed to the European Union (EU) but “in a different way.” While many had been concerned that the UK’s vote to leave the EU would result in the body’s dissolution, time has shown that not to be the case, he said. Moreover, the EU’s strength is good for the British government as MPs negotiate a new “deep and special partnership” with the EU. And a strong EU and strong UK, he insisted, are in the interest of Japan.

Aside from a free trade agreement with the EU, UK government plans include new ways to support the EU, including in defence, security and foreign policy.

Mr Johnson emphasised the importance of Japanese business in Brexit-related negotiations to date, pointing out that its “voice of common sense and reasonableness” is helping drive the free trade agenda not only in Europe but around the world. “It is one of the areas where the UK and Japan are most closely aligned,” he said. “There are some other countries where the gospel of free trade is not being preached as fervently as it used to be, but we know that free trade drives prosperity.”

Explaining that soon “rubber made in Japan is going to hit the road in France via British factories,” Mr Johnson, said there is no reason “frictionless trade” should not be possible across existing EU borders after Brexit.  As in the aeronautics industry, interrupted trade could soon be possible in the automotive industry, provided the urgency of putting systems in place is understood.

“It is very much in the interest of our European friends and partners that it should happen. It is they who have a huge surplus with us in the trade of manufactured goods, in the value of nearly £100bn,” he said.

Speaking of UK–EU trade post-Brexit, Mr Johnson said: “We’ll have a jumbo free trade deal that will suit our own specifications and allow us to be great campaigners and agitators for free trade around the world.”

The UK government, he said, wants to put the interests of businesses first by making one point of change during the Brexit implementation period, rather than two. Its key goals are preserving trade while negotiating a new trade policy and ensuring certainty as well as clarity.  Central, too, is communicating a positive message about Brexit to the British public.

He admitted, though, that there was a plan B should the deal not prove possible, and that “choppy water” may lie ahead.

“We need to show that we still love Europe, which we do,” he said. “Domestically, among the UK electorate, we need to show [Brexit is] not about turning away from the world. It’s about being more open, more engaged in the world than ever before. It’s simply about having a different legal relationship with the institutions of the European Union.”

Mr Johnson welcomed the EU–Japan Economic Partnership Agreement (EPA), noting that the UK wants to use the deal as a framework for it to build an even better trade agreement with Japan. He cited Hitachi’s valuable contribution to London’s transportation network, and both countries’ strengths in the services market as examples of the vast opportunities available.

Japan, he believes, could be the easiest country with which the UK can make a trade agreement, thanks to the EPA. The British government is also interested in playing a role in maintaining the Trans-Pacific Partnership, among other trade opportunities.

Speaking ahead of his upcoming meeting with his Japanese counterpart Fumio Kishida, Mr Johnson said their strategic dialogue was to focus on the two countries’ areas of cooperation. He praised Japan for its efforts globally, including economic reform assistance in the Ukraine and humanitarian support in Syria. North Korea remains a “tough problem to crack” but he said Japan and the UK were united in their belief that the way forward is via China.

He called for understanding that Japan’s neighbourhood is changing and said the UK could be of assistance with not just hardware but also practical advice in such areas as military operations and amphibious warfare. The former Mayor of London will also draw on London’s successful block of attacks on the UK’s national infrastructure in the lead-up to London 2012, to offer cyber security experience to Tokyo Governor Yuriko Koike ahead of the Tokyo Games.

With Japan keen to learn from the successes of London 2012, Mr Johnson said there are significant opportunities for British businesses, which have great things to offer. However, he appealed for realism about the role they can play as he believes Japanese organisations can do a great job, too. “We must approach these things with humility,” he said.

He encouraged Japan not to get down-heartened when people are negative about the country’s upcoming Games, explaining that the British media and general public had been “hysterically gloomy” about London 2012 until almost the opening ceremony. Eventually, he said, the nation would come together and everyone would want Tokyo 2020 to be a success.

For the good of the world politically, economically and socially, Mr Johnson explained that a key objective of the UK’s foreign policy is now gender equality. However, efforts to encourage more women to take up senior positions are also ongoing domestically. According to Mr Johnson, getting women to come back into the workforce after they have children is one of the most difficult challenges in UK society, which the government is working to crack.

In February 2017 he appointed Joanna Roper CMG as the first Foreign & Commonwealth Office’s Special Envoy for Gender Equality. At home her role is to ensure that internal FCO policy and practice enable every woman to reach the peak of her potential, while abroad she will “evangelise for what [the UK government] believes in.”

He recalled being heckled during his speech at the United Nations on International Women’s Day for having an all-male delegation, pointing out that “it was absolutely true, I’m ashamed to say.” Since the incident, he has banned “manels” (panels comprised entirely of men), which he says “may sound like tokenism but it works.”

Mr Johnson summed up his remarks by encouraging optimism on Brexit and future UK–Japan relations. “Brexit is about becoming more global,” he said. “Japan has showed how an island country can become truly global in its commercial ambitions with incredible success, and we need to work with Japan to do just the same.”