Written by BCCJ
February 3, 2015
Past Event Round Ups 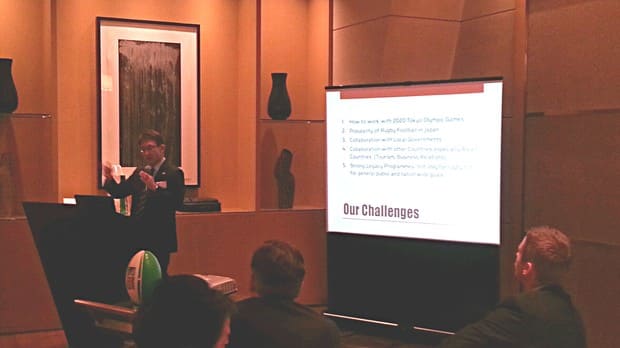 Written by BCCJ
February 3, 2015
Past Event Round Ups

Koji Tokumasu, General Manager of the Japan Rugby 2019 Tournament Organiser, outlined the preparations being made for the games in a presentation and interesting Q&A.

Former England rugby captain Steve Borthwick, who earned 57 caps for England, opened the event and explained how much he had enjoyed playing in the 2007 WRC, which, he pondered, saw England lose in the final to South Africa.

“Looking ahead to 2015, there is going to be a buzz in England and I can imagine what the country is going to be like, the excitement. Given the positive experiences I had in the ’07, I hope that the next RWCs will be even bigger and better.

“The world cup brings a pride in your country that you don’t have the chance to display very often.”

The 15 cities currently in the running to host games will be narrowed down to 10-12 successful applicants next month, but 30 cities will be involved with the tournament once base camp locations are included. As Tokumasu san explained, “The 2020 Games will be in Tokyo, but our world cup is throughout Japan.”

On a global scale, rugby is a relatively small sport, with its ruling body hoping to have six million players across almost 120 countries by next year. Around 300,000 players are in Asia.

Tokumasu san said Japan’s hosting of the cup, the first time an Asian country has staged the contest, was a great opportunity to boost the sport’s profile. This is one of five objectives or challenges set by organisers ahead of 2019. “By giving the RWC to Japan rugby can become a truly global sport, so that’s our mission, not only for Japan but to spread this great game all over Asia. The J League caused a drop in the popularity of rugby in Japan, but this is a once in a lifetime opportunity to make things better.”

However, despite the low number of players, the RWC is still the third’s biggest sporting event in terms of TV viewers.

The organisers’ four other challenges are to work closely with the 2020 Tokyo Olympic and Paralympic Games, to collaborate with local governments, to work with other countries to increase tourism and business relations, particularly with Asia, and to create a strong legacy for after the tournament. 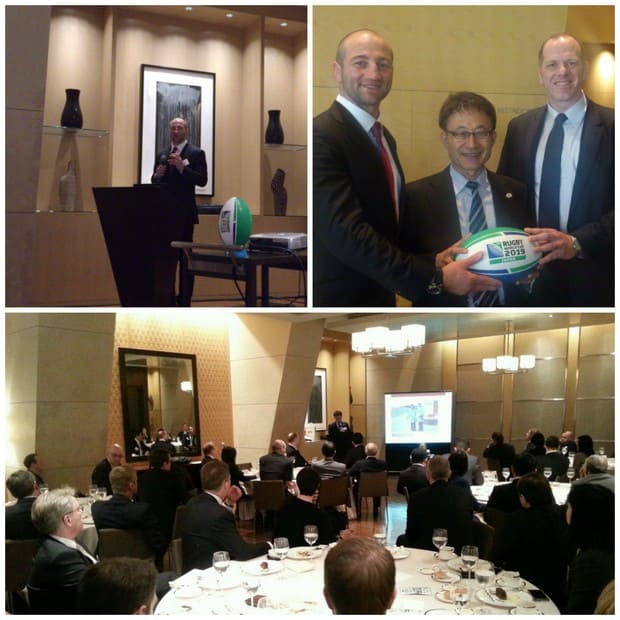 The organising committee currently has 20 members of staff split across seven core functions, but by 2019 its numbers will have swelled to 300, and an army of volunteers. “We are planning to employ a lot of non-Japanese people because of their skills and experiences and to make us more international. But some people say volunteers are the most important ambassadors or the key to success. We are going to learn from the London Olympics and the RWC this year in the UK.”

In terms of tourism, the main focus is encouraging Asian rugby fans to visit and also to boost business ties with Asia and elsewhere. “We want to create more business relations, and for example, this event today is a good opportunity to do that.”

While the RWC Ltd has overall control of major sponsorship decisions, Japan is hopeful that a deal can be struck that would it some say over second and third tier sponsors, allowing local companies to become official suppliers.

Tokumasu san explained how the RWC gave host nations far more to consider than the logistics of organising almost 50 games. There must also be space for a “fan zone”, where rugby fans of all nationalities can get together and intiatives to encourage the use of public transport and make the getting around Japan simple and enjoyable. “In New Zealand they had a “trail” set up as the walk to the stadium was a little far from the centre of the city. In the middle, along the route, were exhibitions and souvenirs, so people could enjoy walking.”

Regarding the challenge to ensure the RWC leaves a permanent legacy, Tokumasu san said cultural exchange would be key. Exchanges and special links with universities will also allow Japan’s younger generation to experience international interaction, which fits with the push for “global jinzai” or “global talent”.

“The young generation, they used to go abroad a bit more, be a bit more energetic, but now they don’t go abroad but stay in Japan and in some areas are more conservative than before. We want to develop more global jinzai, that is young people who can work globally,a and we plan to include students and use campuses as satellite bases.”

There are also plans for 20,000 school children to take up tag rugby, and for Japanese celebrities who played rugby in their youth to inspire others to take up the sport, and for TV characters to become ambassadors. Much of these plans are in their early stages and will come to fruition closer to the cup.” This is because of the Japanese mindset – we are very interested, for a short time.”

The committee are still open to ideas on how they can stamp brand Japan onto the 2019 tournament. “Inside the grounds everything has to be universally standardised but outside everything, including hopsitality, we can stamp Japan on it.” Suggestions have included holding the match draw at a traditional shrine in Kyoto.