UK to support Japan in delivering lasting legacy from 2020 Games 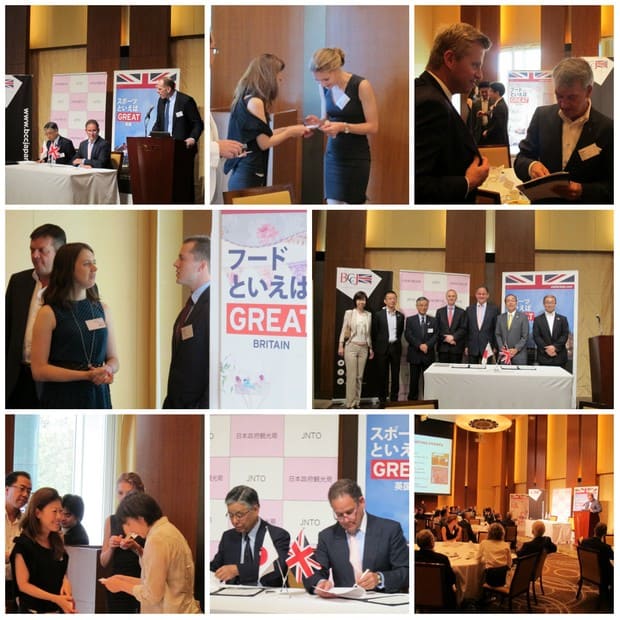 Christopher Rodrigues, Chairman of VisitBritain (VB) and Ryoichi Matsuyama, President of the Japan National Tourism Organistion (JNTO) signed a memorandum of understanding (MoU) this morning at an event hosted by the British Chamber of Commerce in Japan (BCCJ), ‘Ahead of the game: making global sporting events work for your business’, held at the Conrad Tokyo.

In anticipation of the Tokyo 2020 Olympic and Paralympic Games, JNTO will work to promote Japan to overseas visitors with the help of first-hand information from VB, the UK’s national tourism agency. VB succeeded in increasing the number of inbound tourists to Britain as a result of hosting the London 2012 Olympic and Paralympic Games. The MoU sees JNTO and VisitBritain entering a collaboration with the ultimate aim of increasing the number of visitors travelling between the two countries.

Prior to signing the MOU, Mr Rodrigues said that the Games provided opportunities for further understanding between the two countries. “I believe this is a very good relationship in the making.” He went on to acknowledge that the whole of the UK had benefited from the London 2012 Games, having “changed the perception of Britain in the eyes of the world.”

Indeed, London 2012 marked the start of a tourism boom which is set to continue as the UK and VisitBritain seeks to increase the current number of visitors to from 32.8 million to 40 million by 2020.

According to Rodriguez, the UK is well on the way to achieving that target: Llast year was a record breaking year for the UK, with a 6% increase in visits and a 13% increase in visitor spend. This agreement – with our friends at JNTO – will enable us to pass on invaluable knowledge and help deliver a lasting tourism legacy for Japanese tourism.”

Mr Matsuyama, President of JNTO, who lived in the UK for several years, said: “In 2013, Japan welcomed 10 million overseas visitors for the first time in history, and with the Olympics and Paralympics in sight, we have already started working towards a new target. We are delighted to sign this MoU with successful Olympics hosts, and truly value the Tokyo Games as an opportunity to transform Japan into a more tourism-oriented country.”

At the behest of Prime Minister Abe, 2014 marks the start of Japan’s campaign to reach the lofty goal of attracting 20 million foreign tourists by 2020. Hosting the Games will present Japan with a golden opportunity to achieve this, though Matsuyama quipped “this is easy to say, but not so easy to do.”

The signing of the MoU was also welcomed by BCCJ President David Bickle who led this morning’s event: “It is a top priority of the BCCJ to promote business opportunities for British and Japanese companies in connection with the 2020 Olympic and Paralympic Games. Accordingly, we were delighted to be asked to host today’s event, highlighting a landmark agreement to boost tourism between our two countries.”

Tim Hitchens CMV LVO, the UK Ambassador to Japan, said immediately after the MoU signing that it was a mark of the “increasing and continuing co-operation” between the countries across a number of areas. The UK could prove a useful partner for Japan to achieve its goals on the road to 2020: “Tourism is a huge part of the British economy because it amounts to USD 115bn, or 9% of GDP, making it the fifth biggest industry; there are very positive economic benefits.”

Mr Rodrigues than spoke to over 50 BCCJ members and guests about his experience of leading VisitBritain throughout the delivery of London 2012.

He made it clear that the Olympic and Paralympic Games were not simply “a draw in themselves”, and that the real challenge for host nations was how to keep visitor numbers up during the Olympic year – since business travelers and other tourists, particularly those within the region, could be deterred.

“The Olympics is not an event about tourism. In fact in some respects it’s a problem for tourism. The primary task for host nations is to turn what at first seems to be a problem into an extraordinary asset. You might have to accept that you’ll lose before you win big.”

He advised that Japan’s hospitality and tourism industry should be careful not to hike up prices. “Two thirds of Japan’s market comes from China, Korea and Hong Kong. Make sure people don’t stop coming during the year of the Games.”

And he reminded potential sponsors that although the economics are often difficult to justify, the ‘activation’ should be thought of as material: “The Olympics and Paralympics are powerful. This is not just about the Games or business. It is not about individual performance. Remember, you will never get an audience like that again.”

Rodrigues added that it was important to include the whole country in the Games, and that the 2012 torch relay, which covered the length and breadth of the UK, had been a key factor in drumming up support for the Games in regional economies. He himself had been invited to carry the torch for 200 yards outside a children’s hospital in London, and how this continued to be an emotive moment for him personally: “It really needs to be a national and city effort. The people in your communities need to run with the torch. This is a great chance to involve your whole nation in a magic moment.”

In terms of preparations for the Games, Mr Rodrigues said it was “a game of three halves.” Ahead of the Games it is important that the right groundwork is laid as “you can’t bottle it on the day.” During the Games things must run smoothly – from the Passport queue at arrivals to the ceremonies and the events. After the Games it’s crucial for host nations to ensure the success is properly built upon: “it’s a 10 year cycle and the legacy of the Games is where the payback might come.”

In the subsequent Q&A session, Rodrigues explained the importance of finding human interest hooks and keeping foreign media “fed with stories that are of particular interest to them.” For example, between events in 2012, Japanese journalists were taken to Cumbria to see Beatrix Potter’s home due to Japan’s fondness for her children’s characters. This footage was then beamed back to Japan, keeping the UK close to mind. “The world’s media needs to fill the gaps between the Games.”

As for the branding of the Games, Rodrigues joked that the Olympics rings are protected by more lawyers than the number of athletes in an Olympic team, and pointed to an example of a UK B&B being stopped from branding the rings into pieces of toast during the torch relay: “We all want the art of the possible, not to be stopped by the brand police”.

He also emphasised the need for host nations to have one strong marketing message to convey to overseas visitors. In the UK this was the ongoing GREAT campaign, which labels a selection of of British culture and industries as “GREAT”, framed by a Union Jack theme.

Rodrigues had been granted a budget of GBP100m to run the 2012 campaign – half of which was to be given by the UK government, half of which his team had to raise from the private sector. He was clear about how this was able to be achieved:

“If you have one message it can bring together partners united around one key theme. The Prime Minister needs to choose that message so that the money spent promoting the Games is minimal. Such leadership has to come firstly from government, but it is important that there is one strong campaign for business to follow too.”

Rodrigues, who’s visiting Japan to attend the Japan Association of Travel Agent (JATA)’s ‘Tourism Expo’ on September 26, was made a Commander of the British Empire in the 2007 New Year Honours list for services to British business interests and charitable works in the UK and USA.

**The British Chamber of Commerce in Japan (BCCJ) is committed to working with UK and Japanese businesses, as well as the wider international community, to deliver in Japan a successful Rugby World Cup tournament in 2019, and the Olympics and Paralympics in 2020. We are actively working to achieve the best possible organizational, business and community results before, during and after the events**