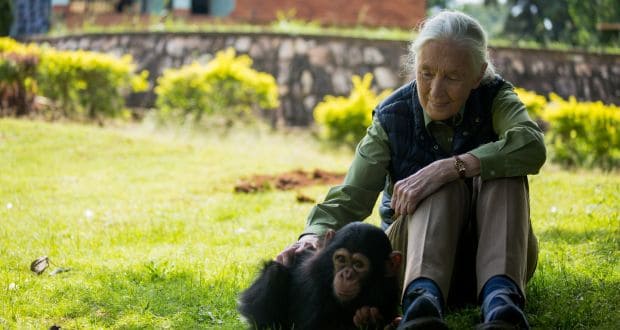 Renowned British scientist Dr Jane Goodall DBE has been awarded the 2017 International Cosmos Prize by the Osaka-based Expo ’90 Foundation for “illuminating the true nature of humans.”

The expert selection panel chose Dr Goodall, founder of the Jane Goodall Institute (JGI) and a UN Messenger of Peace, from 150 nominees hailing from 29 countries for her life-time research on the ecology and behaviour of wild chimpanzees.

This year marks the 25th anniversary of the award, set up by the Commemorative Foundation for the International Garden and Greenery Exposition, Osaka, Japan, 1990. It rewards research that demonstrates “the harmonious coexistence between nature and mankind.”

According to the Expo ’90 Foundation, Dr Goodall, 83, stood out because she is “greatly instrumental in promoting understanding of the interrelationships and integration among all living organisms from a global perspective.”

Specifically, her research on wild chimpanzees “has demonstratively showed the true nature of humans and their evolutionary origin.” She discovered that the animals make and use tools, eat and share meat, and have killed fellow chimpanzees in 153 known cases. From her research it is also known that chimpanzees have a life expectancy of about 50, a birth rate of once every five years approximately, and that mother and child share a lasting bond.

Dr Goodall’s long-term continuous fieldwork based on her ethological observations of animals has become the standard research methodology used for elephants, giraffes and other large endangered animals.

Judges were also impressed that she connects her work with practical conservation initiatives through the JGI, including tree-planting programmes and environmental education activities. She set up the Lake Tanganyika Catchment Reforestation and Education programme for local residents to preserve forests that provide habits for chimpanzees. She also founded Roots & Shoots, an environmental educational programme under which more than 150,000 groups are working in 99 countries. Promoting awareness campaigns to inspire young people to volunteer, its aim is to make positive change “for people, for animals and for the environment.”

Dr Goodall said she was honoured to be selected for the prize. “When I went to Cambridge University in 1962 I was told that only humans had personalities, emotions and minds capable of working out problems. But my research showed that chimpanzees had complex social lives, long-term bonds between family members, and emotions similar to ours: of happiness, sadness, anger, grief and so on,” she said.

“Today I travel some 300 days per year around the world to raise funds for JGI’s programmes, to protect chimpanzees and their forest habits, to improve their wellbeing in captivity, to grow our Roots & Shoots programme, and to try to wake people up as to the terrible harm we are inflicting on Planet Earth … But at the same time I share my reasons for hope that we are not too late to turn things around—for the sake of chimpanzees and all animals, the environment and the future of our children.”

The award ceremony will be held on 6th November in Osaka, where Dr Goodall will receive a certificate of merit, a medallion, and a prize of 40 million yen. She will become one of a host of top scientists to have received the International Cosmos Prize, including Sir David Attenborough, who was recognized for his pioneering wildlife documentary films in 2000.

Photo is courtesy of the Expo ’90 Foundation