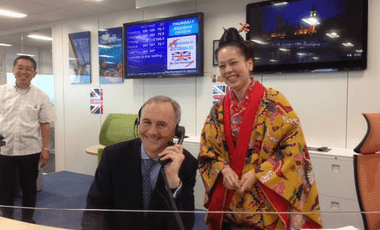 He was welcomed by Philippe Fauchet, GSK Japan President, and Shigeki Fujise, Head of Marketing Excellence.

Ambassador Hitchens told staff: “GSK is one of the most admired companies in UK. I am extremely pleased to hear that GSK Japan has received many prestigious awards, especially the latest President’s Award in the industry-wide Corporate Telephone Skill Contest. You are the ones who are facing the customers on the very front lines of GSK and it is your continuous efforts and professionalism that make GSK such a great company.”

The Ambassador was given a tour of the office and told that the colour scheme included orange as it is GSK’s corporate colour and also represents Okinawa’s sun, and green to represent the Yanbaru Forest.