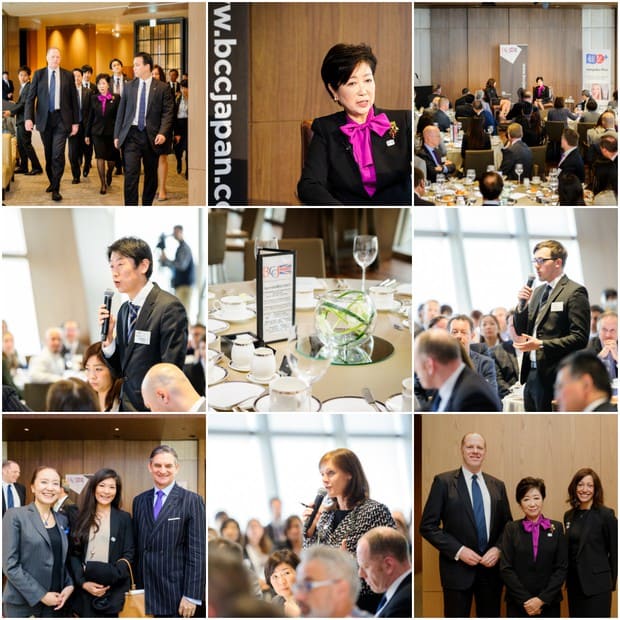 On 6th April 2017, the Governor of Tokyo Yuriko Koike, was interviewed by the Executive Director of the BCCJ, Emma Hickinbotham, and answered questions from BCCJ members in a Q&A session at a fully booked luncheon at the Grand Hyatt Tokyo.

In addition to governing a municipality of 13.6 million residents — the core of the world’s most populous urban area, with at least 20 million more people in its separately administered suburbs — Ms. Koike is responsible for preparing Tokyo for the Summer Olympic and Paralympic Games in 2020 and for managing the costs of the event for the host city.

Tokyo and the Games

BCCJ Executive Director Emma Hickbotham opened the inteview by addressing the many exciting changes, developments and opportunities coming to Japan over the next few years, and asked the Governor about her goals for Tokyo as the host city of the 2020 Olympic and Paralympic Games.

Koike highlighted that it will be the second time the Summer Olympics are held in the Japanese capital, which previously hosted the 1964 Summer Olympics. “I would like to see Tokyo take the lead and to utilise the Games as a catalyst for positive change in Japan and the world.

“The Tokyo 1964 Games completely transformed Japan, enhanced Japanese people’s awareness of the outside world and helped bring about rapid growth of Japan’s economy. Major parts of Tokyo’s current infrastructure including the Metropolitan Expressway and bullet trains were completed in the period running up to the 1964 Tokyo Olympics and signalled to the world that Japan was a cutting-edge global metropolis. The 2020 Games will enable Japan, now a mature economy, to promote changes throughout the world, and leave a positive legacy for future generations.”

The governor said that there will be lasting improvement and change in the areas of sport & health; urban planning and sustainability; culture and education; economy and technology; and global communication.

Koike emphasised her commitment to leveraging the positive momentum of the Paralympic Games and the success of the athletes to change societal attitudes in Japan to disability. “I would like the Games to contribute to the realisation of a fully inclusive society in which all people are accepted and respected for whom they are, whether they have a disability or not. The Tokyo 2020 Games will foster a welcoming environment and raise awareness of unity in diversity among citizens of the world. Educating young children in Japan to embrace diversity will be a big part of this.”

In terms of improving accessibility, Koike pointed out that the Tokyo 2020 Organising Committee has formulated official Accessibility Guidelines, which have been approved by the International Paralympic Committee. “In an ageing society such as ours with increasing numbers of people with disabilities, improving accessibility in Tokyo is paramount.” A wide range of legacy-focused actions will be implemented through the Action and Legacy plan to ensure continued advantages for future generations.”

In response to a question about tackling Japan’s notorious long working hours, Koike said it was time to shake up outdated attitudes and that flexible working practices were vital for the future growth and sustainability of the Japanese economy. Her goal, she said, was to abolish the long-existing overtime culture in Tokyo offices and to ensure a healthier work-life balance among the working population of the city. The governor herself has introduced a lights-out, zero-overtime system at the Tokyo Metropolitan Government (TMG) where all staff must leave the office by 8 p.m.

“Life should be more important than work,” she said. The Governor emphasised the effectiveness of innovative communications technology in increasing the possibilities for remote work and improving work-life balance. “Indeed, the British recognised the considerable advantages of remote work during the London 2012 Olympics, when many people worked from home to avoid the crowds in the city. This needs to catch on in Japan.”

Koike stressed that managers must lead by example. “It is the company president and the managers who have to make sure they leave work on time. Only then will others follow.”

Responding to a question about the barriers still faced by women in their careers, the Governor addressed the recent World Economic Forum report which saw Japan fall to 111th in the Gender Gap index, despite government efforts. “This is because the core issues have remained out of reach. We need to create an environment conducive to raising children by encouraging flexible working, increasing daycare facilities, and most importantly, ensuring that men play an equal role in childcare.” Only 2% of men currently take paternity leave in Japan, and it is typically the mothers who do not return to work after childbirth, or if so, return to a lower-paid, part-time position with a lower standing. “Current employment practices have to change!”

In August 2016, The Independent newspaper quoted Koike: “In Japanese society, you try to build consensus and try to keep harmony, but I would like to convince people to change for the sake of our society. I learned that from Mrs Thatcher.”

Upon being asked if she considered herself an “Iron Lady”, Koike said she preferred to be called a “Silk Lady”. She praised the determination and vision with which Prime Minister Theresa May had taken the helm of the British government and said she admired all successful female leaders and had learned from them. Koike emphasised her belief, however, that the focus should not be on gender, but on qualities and achievements. “It’s not about a person’s gender, but about what they do.”

When asked how she would like people to look back on her in the future, the governor expressed her objective to make the government more open and transparent to citizens and to ensure that the 2020 Olympic and Paralympic Games are a success. ” I would like the Games, through flawless preparation and execution, to deliver an event where every athlete can realise their best performance and achieve their personal best. I would like Tokyo 2020 to be the most innovative in history, to foster a welcoming environment, and to leave a positive legacy for future generations.”

In conclusion, Koike informed BCCJ members about the launch of TMG’s Tokyo 2020 medal project. The project entails precious metals such as gold, silver and bronze being salvaged from discarded mobile phones and other small electronic devices, and recycled for the production of medals to be awarded to athletes at the Tokyo 2020 Games.

“The project also highlights Tokyo 2020’s commitment to actively engage the general public and offer everyone the opportunity to play a role in the preparations for the Tokyo 2020 Games. The aim is not merely limited to producing medals to be awarded at the Tokyo 2020 Games, but also includes leaving the post-Games legacy of realising a sustainable society. Please be sure to bring your old mobile phones to our office – afterwards you can stop off at the Golden Gai on your way home!”