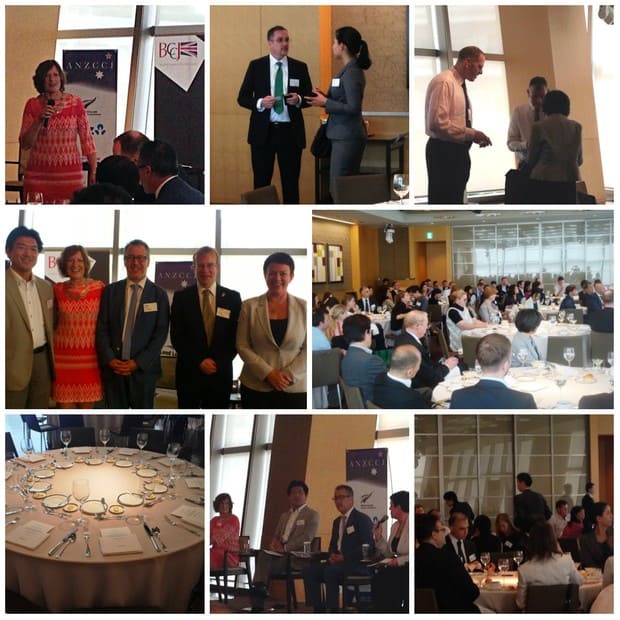 The Tokyo 2020 Olympic and Paralympic Games offer Japan a great opportunity to improve diversity in the workplace, said Sue Hunt, Director of Strategic Programmes at London Organising Committee of the Olympic Games and Paralympic Games (LOCOG) at a joint-chamber event, held yesterday at the Grand Hyatt Tokyo.

LOCOG was the private sector organisation tasked with running the London 2012 Olympic and Paralympic Games. Sue – currently visiting Tokyo as Global Ambassador of the Flourish Programme – explained that the concept of diversity at LOCOG had gone beyond simply ensuring that teams were diverse.

“We also looked at everything that we bought,” she said. “For example, you need 16,000 shuttlecocks alone for the badminton competition. Every time we engaged in procurement, the business had to demonstrate diversity and fairness as well.” She added: “Although we were a private organisation we were held to public scrutiny. We put values before finance. Some organisations had to change radically in order to be successful in the tender processes associated with the Games.”

Sue said that LOCOG had a set of values (Team, Open, Respectful, Inspiration, Distinctive, Deliver) against which all team members were regulary assessed – in addition to their own delivery goals. “We had objectives for every individual in the organisation; we assessed people and measured them against their objectives,” she said. This approach helped to keep people focused particularly when the organisation rapidly expanded in the immediate lead up to 2012.

Melanie suggested that Japan could learn from an Australian initiative, Male Champions of Change, to promote diversity programmes which engage influential men in gender equality issues. She also praised Akie Abe, wife of PM Abe, for her commitment to improving the agility and diversity of Japan’s workforce. “However, we should remember that we are not here to boss Japan around, we are here to listen/show different models of behaviour”.

Ushijima-san said he believed the 2020 Games were an opportunity to transform Japan’s male-dominated business culture, and see contributions from “new players” such as women, young Japanese, and non-Japanese workers. He said: “We should fuse communities of women, non-Japanese and others to encourage new business driven by new players. Traditional business relationships have been brokered through drinking, smoking and golfing in Japan. It’s not very inclusive for women and non-Japanese. I’d like to break (the system).”

In the subsequent Q&A session, Sue was asked what qualities of female leadership might bring value to an organisation. She said: “I think we get strength from the combination of men and women. It’s important to just be yourself. There were so many senior women in LOCOG [five directors were female] and they weren’t pretending they were men, but they were making really good business decisions.” She added: “Women are really good at multi-tasking; the delivery of large, complex global events with time-sensitive deadlines requires people who can multitask.”

Sue was also asked how LOCOG ensured that all parts of the UK felt involved in the Games. She explained that community gyms had been helpful, and that the torch relay, watched by thousands of people, had been carefully planned to reach as many people as possible across the country. She added, “initiatives which invited members of the public to question senior Games organisers, such as Lord Sebastien Coe, were also successful at promoting inclusion – though were not always easy.”

During the Q&A session, it was suggested that TOCOG (Tokyo Organising Committee of the Olympic Games and Paralympic Games) is a Japanese-only-speaking ageing male club.

In response to a question about how to propose diversity and inclusion solutions to decision-makers in Japan, Melanie said it was important to engage with those in power by writing letters or making appointments in order to ensure that a variety of views could be included in Tokyo’s 2020 strategy. Danny added that getting into the same room with senior members of TOCOG – at the slew of Olympic events happening in Tokyo – was also important for pushing agendas of change. Sue said she believes that female-leadership programmes such as Flourish can offer a practical solution for creating empowering and inclusive cultures – in Japan and globally.

**The British Chamber of Commerce in Japan (BCCJ) is commited to working with UK and Japanese businesses, as well as the wider international community, to deliver in Japan a successful Rugby World Cup tournament in 2019, and the Olympics and Paralympics in 2020. We are actively working to achieve the best possible organizational, business and community results before, during and after the events**