Written by BCCJ
March 8, 2017
Past Event Round Ups 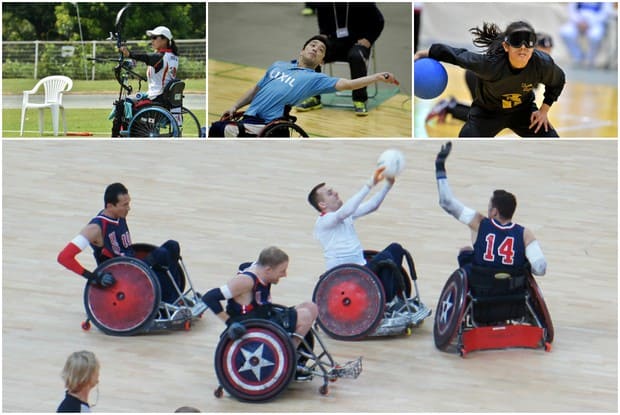 Written by BCCJ
March 8, 2017
Past Event Round Ups

On 7 March 2017, the BCCJ hosted a joint Global Sporting Event with the British Embassy Tokyo, at which Tim Hollingsworth, CEO of the British Paralympic Association, and triple Paralympian Andy Barrow inspired BCCJ members with motivating advice on best practices in the business planning and delivery of the Paralympics and how sport can transform perceptions and inspire excellence.

The speaker reflected on some of the awe-inspiring achievements of UK Paralympians to date: “In London 2012, Paralympians were celebrated as heroes, and Rio 2016 was ParalympicsGB’s most successful Games ever, winning an outstanding total of 147 medals and securing second place on the medal table. This incredible sporting success has been a catalyst for a wide range of inspirational activity and positive change on a global level.”

Sport as an agent of change

Hollingsworth explained that the BPA wants to see this catalyst being used by future host countries to improve facilities, coaching and access to Paralympic sport and – beyond that – to deliver real and lasting change in society through the inspirational impact of Paralympic athletes. “Every sporting event can amaze, excite, and thrill, but parasport also has the ability to change.” The BPA’s ambition, he said, is to collectively harness the positive momentum of the Paralympic Games and the success of the athletes to change societal attitudes to disability.

The speaker emphasised, “it is important to be competitive and win on the world stage. We are very focussed on excellence, but the BPA has a vision not simply to win medals. We would like to see a shift in mindset from ‘impossible’ to ‘I’m possible‘.” The Paralympic Games, said Hollingsworth, should focus on achievements. Paralympic success will help inspire understanding and participation in sport at community level and wider engagement and attitudinal change across society.”

“Conversations, recognition, and understanding among the people emboldens attitudes and spirit”, he said. “In 2012, London’s population was a civilising force communicating a sense of society and spirit for change.”

It seems that the positive power of the Paralympic brand in the context of a movement for behavioural change has already taken effect. Hollingsworth cited research by YouGov, which showed that the impact first felt during London 2012 has been maintained:

• 75% of respondents said that the Paralympic Games was either very inspirational or inspirational to them as an event.
• Half of respondents said that Paralympians were identifiable as positive role models in society with 70% identifying their courage and determination as inspirational.
• The Paralympic brand scored seven out of ten in relation to respondents having a positive association with organisations sponsoring the BPA, higher than any other listed sporting organisation.
• 8 out of 10 disabled people considering taking up sport following the Games.
• Three-quarters of Britons felt more positive about the role of disabled people having watched the Games.

Hollingsworth urged BCCJ members to become involved. The speaker highlighted areas on an external level in which companies can take action: share best practices, officially support the Paralympics, lobby the government to enhance the reputation of the Paralympic Games, and encourage collaboration across industries.

He also called upon companies to introduce internal initiatives, motivating and engaging employees to participate in sports events, the way sponsor companies such as BT, Cadbury, Deloitte, Hogan Lovells and Sainsbury’s have so successfully done in the past. “Staff involvement results in increased awareness and morale, improved communication and personnel relations, and often a greater sense of identity among those with disabilities.”

Hollingsworth emphasised that partners both within sport and from other sectors can benefit considerably from the positive impact of the Paralympic Games. “It will boost your brand, enhance your values, and as far as sponsorship goes, it is an excellent investment compared with other sporting events.”

To illustrate the massive impact a company can have on the perception and success of the Olympics, Hollingsworth highlighted the ground-breaking commitment of the offical British Paralympics broadcaster, Channel 4, to on and off screen diversity with the largest ever team of disabled presenters on UK television and 26 disabled production staff to report on the Rio Olympics.

“It was the biggest ever overseas broadcast in Channel 4 and Paralympic history with over 700 hours of live Games coverage across Channel 4 platforms – including The Last Leg live which pulled in more than a million viewers each night of the Paralympic Games and was so popular that it was continued as a weekly show.” The Channel Four Paralympics platform played a significant role in raising awareness and changing societal attitudes. See Channel 4’s inspirational and acclaimed Rio Paralympics 2016 Trailer ‘We’re the Superhumans’ HERE.

The BCCJ next welcomed to the stage Andy Barrow, who drew on his experience as a Triple Paralympian, three-time European gold medallist and former captain of the Great Britain wheelchair rugby team, to inspire the BCCJ audience.

Barrow explained to BCCJ members that he had broken his neck during a badly engaged scrum when he was just 17 and spent five months in hospital going through intensive rehabilitation sessions. “I decided at an early stage that I wanted to stay as fit as possible. I craved the sport and values of rugby, as well as the support network. It was only once I looked into it that I discovered there were so many amazing para-sports on offer. I chose wheelchair rugby and a whole new world opened up.”

Barrow spoke of the empowerment he felt when he switched from his standard wheelchair to his “Formula One” sports wheelchair, and the determination he felt to work hard, to push himself, and to make it to the world of elite sport. He spoke of the awe he felt at his first Paralympic Games in Athens when he saw the incredible skills and successes of other Paralympians. In the space of 11 years, from lying paralyzed in a hospital bed, Barrow had succeeeded in becoming not only a Paralympian, but the captain of his country at the Beijing Paralympics.

London 2012, the speaker said, was a turning point in the public perception and visibility of Paralympic sport, as well as the emergence of new heroes such as David Weir and Hannah Cockroft. “Pushing out in front of 80,000 spectators in a festival of talent and diversity was emboldening!”, said Barrow. “There was such a sense of pride throughout the whole nation.” The speaker empasised the importance of diversity and, like Hollingsworth, encouraged companies to become involved in CSR sport activities and volunteering.

The importance of education

Barrow also emphasised the importance and effectiveness of education in transforming perceptions, and highlighted the success of the Get Set programme. This educational initiative was designed to introduce the Olympic values of excellence, friendship and respect, and the Paralympic values of determination, inspiration, courage and equality to young people aged between 3 and 19 by providing free learning resources to British schools.

Barrow encouraged educators in Japan to appeal to the younger generations and to develop different ways of working sport and sport values into the curriculum. “Putting young people at the heart of the Games and engaging them in the Paralympics plays a vital role in promoting the thrill of para-sports, but also in forming their attitudes towards disability.”

“The silver bullet is the younger generation,” said Barrow. These days, the first visual experiences that children get of para-sports are “cool”  images – they have a completely different perspective of the Paralympics to previous generations. The London Paralympics were a step change for the Paralympic movement.”

Both Hollingsworth and Barrow emphasised the privilege of hosting the Games and the incredible opportunities they bring. They both recognised that no city can be expected to provide a fully accessible city, but that Tokyo was obviously fully committed to doing its very best, but that most importantly, “changes in attitude must come first and this change will then drive the agenda for infrastructure change.”

Finally, the speakers argued that one shouldn’t speak of a ‘legacy’ in relation to the Paralympic Games. “The word legacy suggests that you have reached your high water mark in terms of ambition and opportunity and are now seeking to find ways to sustain it.” said Hollingsworth.

“That is not the case for Paralympic sport. There should be more, and greater, things to come. So for me we should talk not of legacy but of momentum. What can be built as a result of the Games that will affect lasting improvement and change?”

Both speakers expressed their confidence that Japan will rise in support of Paralympians and with the same fervour as London 2012. Barrow concluded, “Through sport, Japan can inspire a better world for people with disabilities and the Tokyo 2020 Paralympics have the potential to transform Japan into a society that promotes sustained acceptance and integration. Let sport be an agent of change!”