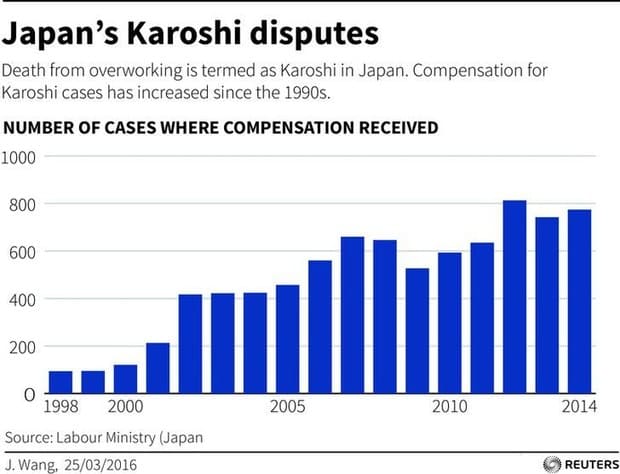 A Labor Ministry survey indicates that employees at one in five companies are working more than 80 hours of overtime a month. That exceeds Japanese government-set criteria for determining cases of “karoshi”, or death caused by overwork.

The Labor Ministry conducted the research in December and January. More than 1,700 companies responded.

By industry, telecom firms show the highest rate at more than 44%; research and technology service companies, 40.5%; and the transport industry, over 38%.

Ministry officials say they will conduct more surveys and tighten supervision over industries where the number of “karoshi” cases is particularly high.

Reuters also reported recently on the increase in deaths in Japan from overwork. Japan has no legal limits on working hours, but the labor ministry recognizes two types of karoshi: death from cardiovascular illness linked to overwork, and suicide following work-related mental stress. Work-related suicides have increased 45% in the past four years among those 29 and younger, and up 39% among women.

Hirokazu Ouchi, a professor at Chukyo University, warned in his book published last year that Japan’s working-age population has been falling since the mid-1990s, which would normally lead companies to improve working conditions to attract workers, but that instead, companies are bending the rules to keep labour costs down and implementing exploitative work practices.

The problem has become more acute as Japan’s workforce has divided into two distinct categories – regular employees, and those on temporary or non-standard contracts, frequently women and younger people. In 2015 non-regular employees made up 38% of the workforce, up from 20% in 1990, and 68 percent of them were women.