Running a Railway from JR Central to the World 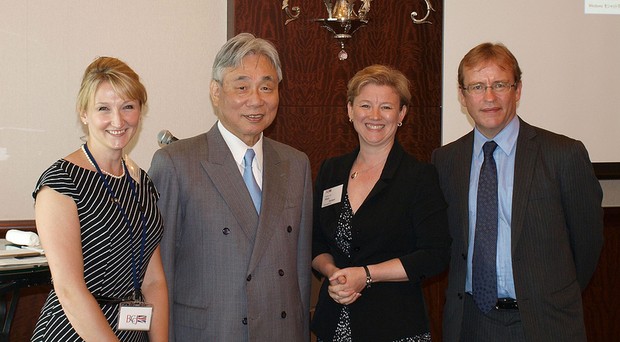 On June 18, BCCJ was delighted to host a lunch event led by Mr. Yoshiyuki Kasai, the chairman of Central Japan Railway Company (JR Central). The event was held at the Shangri-La Hotel and was attended by over forty BCCJ members as well as representatives from the British Embassy Tokyo.

Mr. Kasai highlighted how JR Central is one the busiest and most efficient railway services in the world – managing to maintain a highly impressive service standard. He went onto present the impeccable record of the Shinkansen, explaining, “there have been no passenger injuries or fatalities since the Shinkansen operations started in 1964”.

While JR Central’s market area covers just 23.7% of Japan’s land area, it accounts for 59.7% of the country’s population, and 64% of the gross domestic product.

The BCCJ audience was also treated to an overview of JR Central’s investments and current global ambitions, including the firm’s “fifty year plan”.

The event closed following an informative question and answer session, which included an enquiry about high speed Maglev technology. Mr. Kasai gave a summary of the technology – which will connect Tokyo and Osaka in approximately one hour by the Chuo Shinsanken. Mr Kasai stressed that the time it takes to move between the centres of Tokyo and Osaka will be shortened to almost half that provided by air travel. In addition, the amount of CO2 emissions that the Superconducting Magleve produces per person between Tokyo and Osaka is approximately one-third that of aeroplanes.

Mr Kasai also refered to JR Central’s successful non-rail business – the Matsuri restaurant, in the St. James’s area of London – and very kindly extended an invitation to all BCCJ members and friends to visit the restaurant at a discounted rate.

Photos of the event: Running a Railway