On the evening of July 23 2013, the BCCJ hosted “Music in Japan” at the Oakwood Premier Midtown Roppongi. Guest speakers Peter Barakan, Guy Perryman, and Keitaro Summii delivered an entertaining and informative overview of the history and current status of the industry in Japan – now the world’s largest music market, and the only one in which CD sales are increasing.

The session was moderated by BCCJ Events Head, Graham Davis (The Economist).

Peter Barakan is a Japanese DJ and broadcaster, and the host of “Barakan Morning” on InterFM (76.1). He also hosts the TV series Begin Japanology on NHK World, which introduces various aspects of Japanese culture, and is co-host of CBS Document, the Japanese version of 60 Minutes. A self-described ‘music-nut,’ Peter has also written several books, including a beginner’s guide to soul music, and an album guide covering black music from Africa to the Americas.

Guy Perryman is a British radio DJ that was brought to Japan on a three month contract for the launch of Virgin Megastores in 1990; twenty three years later he’s still here! Over the years Guy has carved out a successful career in broadcasting and entertainment – including creating a cable radio channel broadcast to over 30 Virgin Megastores across Japan in the 1990’s. From 1998, Guy has hosted daily programs on Tokyo radio station Inter FM and has interviewed over 2000 famous faces including Sting, Coldplay, Sir Richard Branson, Sir Paul Smith and Dame Judi Dench. Currently Guy hosts Japan’s only dedicated British music program, Inter FM’s LHR – London Hit Radio (Monday – Thursday from 14:00-16:00, www.interfm.co.jp).More can be seen at www.guyperryman.com

Music provides the soundtrack for our lives. Whatever the form and whatever the style, only the most tone deaf have no affinity or affection. And it is a creative art which allows for 70 year olds to headline Glastonbury; for a constant succession of newcomers to build on musical legacies going back to the dawn of time. But behind all of this is a fast moving industry – radio, recording, sales, tours, promotions and tie ups – all of which rise and fall not just with the creators and consumers, but also with business and technology trends. The last few years alone have seen downloads – illegal and legal – replace physical ownership; they’ve seen bands and promoters get out on the road; and they’ve witnessed the growth of mega-festivals and tours. It is perhaps the ultimate consumer industry, but equally one where the consumer is an unpredictable beast. How then can the music industry cope, and what does it hold in store in Japan?
Event PHOTOS 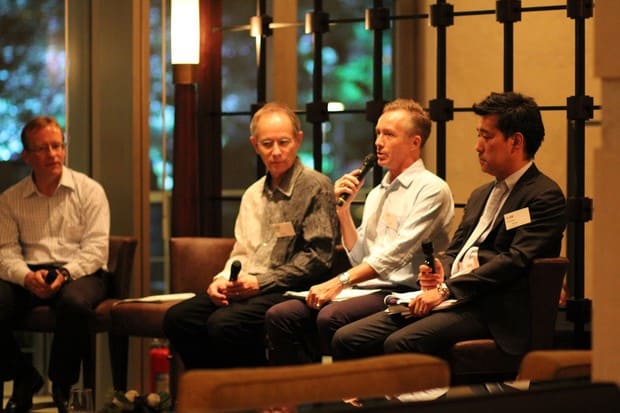