Medical devices to modern art on a remote Japanese island 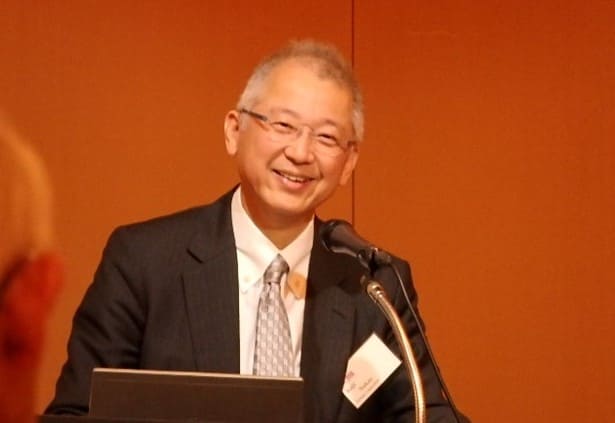 At a BCCJ lunch event today, Koji Nakao, Chairman and Representative Director of medical devices giant Terumo, shared his experience of supporting a contemporary art project, Art Base Momoshima, on a small island in Japan’s Inland Sea. Like so many areas in rural Japan, Momoshima is in danger of dying out. At the event, “Medical devices to modern art: inside the Japanese board room”, Nakao confided to BCCJ members and guests that he hopes the project can energize the island community.

Setting the scene, he explained how his personal passion for art had led him to work with internationally renowned artist Yukinori Yanagi. Nakao first spotted Yanagi’s work in the Tate Modern in London and later arranged to meet him in Japan. Nakao heard that Yanagi was looking for a location to set up a studio; by coincidence the area he had in mind was near Nakao’s home city of Onomichi in western Japan. Nakao said: “My life has been coincidence after coincidence, and this has been the same.” Nakao subsequently introduced Yanagi to the island’s mayor, and soon after an abandoned junior high school – one of many abandoned buildings on Momoshima – was chosen as a site for a studio and exhibition space. Nakao who leads Terumo’s 19,000-strong workforce added that his love of modern art came from the challenge of understanding the concepts, as well as the aesthetics. “It’s a dilemma, because it both puzzles and pleases.”

It took around a year and half for volunteers to renovate the school, which currently houses several exhibits including Yanagi’s graduation piece from his time at Yale University in the 1980s. This installation depicts Mickey Mouse driving a model car, with working engine, inside a mouse cage. “The piece represents how US society is caged, so to speak, by fossil fuels. It uses Mickey Mouse as an American symbol, and the car and the cage are red, white and blue,” Nakao explained.

Momoshima has also hosted Yanagi’s award-winning work, Eurasia, which depicts flags of the world using coloured sand, with ants living inside the plastic cases for several days, riddling the images with small tunnels. Other exhibits include a Phantom Jet, tiny construction cranes made from human hairs, and temporary art scratched into decaying sea walls.

Nakao explained that another of Yanagi’s works, a neon Japanese flag that switches between the Japanese national flag, the Rising Sun flag, and a sunrise, proved costly to run. “It caused problems for the electricity bill. You switch it on and you can really see costs going up. So what we did was install a coin meter – if you want to view the piece you put 100 yen in and you can see it for three minutes.”

The pay-per-view approach, which raised chuckles from the audience, typifies the lack of commercialism in the project overall, which is largely funded by donations. The project’s mission statement explains that the aim isn’t to raise money, stating, “For artists and their collaborators, art here is not the means but the very end itself.”

While the success of Terumo, Japan’s leading medical device manufacturer, is measured on its financial returns – net sales for fiscal year 2013 were JPY467.4 billion – Nakao has very different KPIs in mind for Art Base Momoshima. The first is that Momoshima becomes renowned for its contemporary art, and attracts visitors from around the world. “If one day people from overseas come to Haneda airport and don’t stop in Tokyo but come straight to Onomichi and get a boat to Momoshima, and also acquire some of the pieces there, we will have achieved a goal.” His second aim attempts to address Japan’s low birth-rate, “We would like to see some new babies from the staff working on the project! With Terumo, of course it is about the ROI but also, even then, what we do with medical devices is for the work of medical professionals and serves patients at the end of the day.”

In a lively Q&A, Nakao explained that while the island had not so far seen any strong economic changes as a result of the project, there has been an impact on the community, which just like the rest of Japan, is ageing rapidly.

The vast majority of the island’s 550 residents are elderly. “A marginal community is one where 50% of the population is over 65 years old, so this community is very very marginal. At 65 you are still young.”

Nakao said the project hadn’t directly set out to rejuvenate the island, but the residents were very curious about the project.  Asked about the impact he said: “Really there’s been nothing negative. They don’t understand contemporary art because they haven’t had the opportunity, but they are pleased about the increased traffic. They see many people come and it’s exciting for them. The artists and the staff members are doing very well with communicating with islanders and they drink together and do karaoke together.”

There are other considerations for the marginal community: “Given the age of the residents, probably almost once every month there is a funeral. We go to the funeral, we are not relatives but we show up and they appreciate it.”

Nakao pondered, “So the for the economy, no big impact yet, but the people like it.  I guess we hope that maybe in 3-5 years it will bring something good for the economy and many people will come.”

Some Momoshima pieces have been bought by art collectors and galleries, and the project is supported by a gallery which presents works to buyers in Shanghai and Hong Kong on its behalf. Still, Nakao admitted, “The life of this project is unstable, sometimes we have money but sometimes we don’t.”

Nakao stressed that his work for Momoshima was not related to his work at Terumo, which employs 19,000 people, but he hoped that the company would be able to support contemporary artists who were struggling financially. “I keep these interests very separate, but having said that some of the contemporary artists in Japan are not that rich – they are poor young artists. We could set up a foundation at the company, so I’m trying to do that. In Japan there is lots of government officialdom to deal with, but I hope it’s going to go through.”

Finances aside, Nakao said he also faced a challenge in finding young people willing to live in an isolated place with no nightlife while working and volunteering for the project. “We have young men and women coming, but actually we have a problem with young guys leaving because they don’t like the bugs. We interview them but after a few days they say they want to leave because of the island bugs!”