Lord Patten: There is no road – the road is made by walking

Written by BCCJ
October 20, 2015
Community and Business, Past Event Round Ups 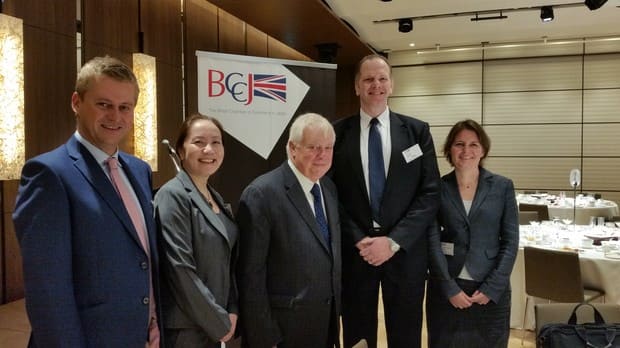 Written by BCCJ
October 20, 2015
Community and Business, Past Event Round Ups

At a fully-booked breakfast session hosted by the BCCJ in association with the University of Oxford Japan Office, Chris Patten (Lord Patten of Barnes), Chancellor of the University of Oxford, last Governor of Hong Kong, former EU commissioner, and Chairman of the BBC, addressed the topic “Who will win the 21st Century – the continents in competition”, at the Grand Hyatt Tokyo.

Comparing the rise and fall of economic and political world powers throughout history and the perpetual transition from periods of stability to those of uncertainty, Lord Patten addressed some of the concerns and questions that arise from such change as well as the current and future challenges faced by the UK and Japan in their respective regions.

The speaker shared his extensive knowledge via inspiring anectodes. Reminding the audience that “a trend is a trend until it bends”, he advised against becoming hooked on the economics of extrapolation. Addressing the uncertainty that many nations now face with regard to stability and the future, Lord Patten cited Antonio Machado; “there is no road – the road is made by walking”, and chose Lampedusa’s words to reflect on the current challenges of EU reform; “If you want things to stay as they are, things will have to change.”

Diverse and interesting questions were posed in the subsequent Q&A session where Lord Patten was invited by the audience to reflect upon topics such as emerging markets, the EU and Euroscepticism, democracy and diplomacy, education, immigration, and international intervention.

On the topic of immigration, the speaker said that including inbound international student numbers in the UK’s immigration figures artificially inflates numbers and “is off-putting to the very people we should be actively trying to encourage more to come to our country”. The government must also become more flexible in recognising the skills, academic and otherwise, that inbound students can bring to the UK, and invest more in research and development, said Lord Patten.

He went on to say that he firmly believes that the future lies in the hands of countries who can develop and maintain inclusive political and economic systems.