Leadership Beyond the Boardroom 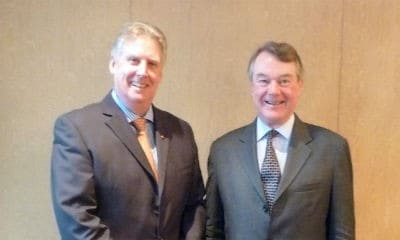 This morning at the Mandarin Oriental Tokyo more than 30 BCCJ members and guests attended “Leadership Beyond the Boardroom” a breakfast event led by Richard Boggis-Rolfe and moderated by former BCCJ President Phil Gibb.

Richard, global chairman of Odgers Berndtson – the firm responsible for appointing the CEO of London 2012 Olympics and Paralympics and currently recruiting for the head of the 2019 Rugby World Cup (to be held in Japan) – shared big-picture insights into how the concept of leadership could change as the baby boomer generation enters retirement.

Arguing that the dramatic fall in population since the baby boom will lead to increased competition for senior executive roles, Richard said, “The war for talent will most certainly intensify, while at the same time we will see a shift in attitudes about what leadership actually entails”.

He noted that a generation of younger leaders is now “placing greater emphasis on work / life balance, are less in favour of hierachy, and are more open to the feminisation of leadership”.

And he went on to argue that the rise of women in leadership should be viewed by organisations as economic imperative rather than a moral obligation.

Richard then expertly fielded an illuminating 30 minute Q&A session and concluded: “Clarity of vision, communicative skills and the ability to gain trust from your people” said Richard “are the three essential requirements for global leaders – with openness and honesty being key to gaining trust in the first place”.