Konica Minolta: The view from inside a Japanese boardroom 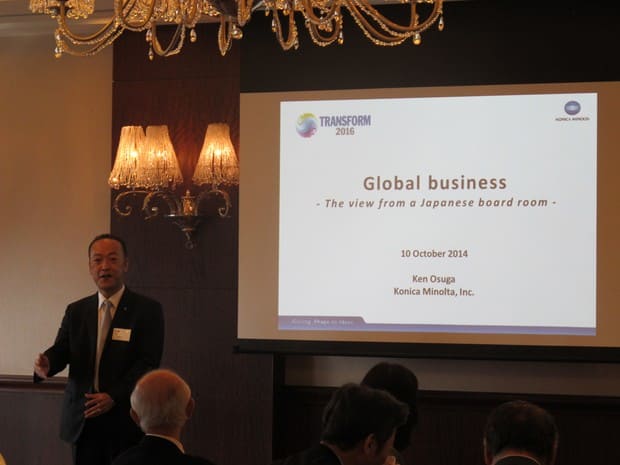 Ken explained about Konica Minolta’s current activities and shared his views on Japanese corporate culture viewed through his extensive experience of leading the company in Europe.

Konica Minolta has moved away from cameras and B2C sales, and is now solely a B2B company. It now also own Kinko’s and Charterhouse and spans industries such as printing, textile printing, MRI scanning and other diagnostic tools, as well as IT services to ensure patient information can be shared by different organisations. The company employs 40,000 people worldwide, with 6,000 working in Japan.

Ken, who has worked in Germany, France, the US and the UK, spoke of the importance of having a global human resources policy that recognised cultural differences. He explained the need to manage staff from high context cultures, such as Japan and to some extent Britain, where communication is often implied, and low context cultures which produce more direct communicators.

“There are 20 languages spoken at our European headquarters and all countries have histories with their neighbours. In such a diverse environment talent management is important. It’s vital to have common values in a global company. Perhaps Norwegians and Brazilians perhaps can’t communicate and have different cultures but they know the common values. The common values can be the company blood.”

He added he believed that there were some similarities between Japanese and British characteristics. “In Japan, sometimes people say ‘yes, yes yes,’ but what they mean is ‘no.’ I think Britain can be the same.”

He said that although more Japanese companies were hiring groups of international graduates in a bid to adopt a more international working culture, the changes wouldn’t truly be seen until middle managers and above also had some international members among their ranks.

“Young graduates are young people, they have to report in to middle managers. Unless middle managers are from overseas or have spent time there, at the end of the day the culture is still Japanese. The challenge is how to increase non-Japanese managers. Maybe it will change in ten years when minorities gradually become a bigger part of the workforce.”

Asked about whether he considered the possibility of a future paperless society as challenge for Konica Minolta, Ken said he believed the company’s other business interests meant they were well prepared for any changes in demand for paper printing.

“This argument was there a quarter of a century ago but still our world is filled with too much information and so we need paper. If paper is reduced, we will still need textile printing and input decides.

He was also asked for his views on whether quotas were needed to ensure more women in Japan were promoted to senior positions. “We probably need some legal intervention; this type of radical framework maybe necessary as an electric shock. From the bottom up a lot of women have the passion to be promoted. It will take time but we are on the right track.”

With 70% of the company’s business being exports, Ken said the weaker yen was “appreciated” but added that in a global company gains on one region due to currency changes could be offset by losses in another.

He said he was pleased to return to Japan after living extensively in Europe. “I’m really enjoying Japan. This time I really appreciate  it due to becoming older – I want to behave like Japanese people and go to onsen!”

Haruno Yoshida, President of BT Japan, asked whether Ken believed Japan’s cultural tendencies meant they failed to match international ideas of global leadership. “Business leaders are seen as people who make quicker decisions, this is not always applicable in Japan and is not the Japanese way. A global Japanese business needs to a hybrid base. For global leadership we have to understand how to lead the rest of the non-Japanese people. Such experience is truly a must.” 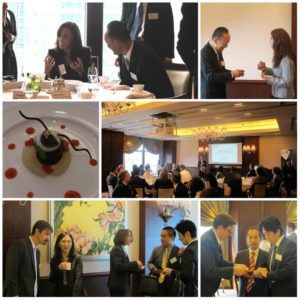 See our Flickr site to view all photos from the event.