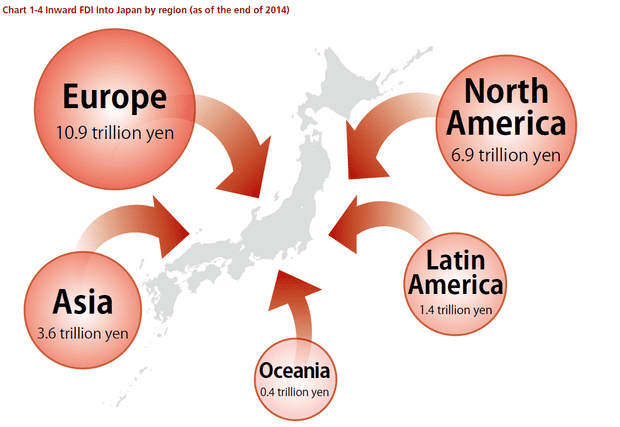 The Japan External Trade Organization (JETRO) is a government-related organization promoting mutual trade and investment between Japan and the rest of the world. It offers foreign investors abundant information on all aspects of doing business in Japan, by providing expert consultation and offering free temporary office space in major business areas across the country.

Under the revised “Japan Revitalization Strategy” adopted in June 2015, the government aims to double inward foreign direct investment stocks from ¥17.8 trillion as of the end of 2012 to ¥35 trillion by 2020. The strategy also includes measures to increase the number of women in the workforce, double the number of foreign employees in the IT and communications sector to 60,000 by 2020 and to draw more than 20 million foreign tourists annually by 2020.

Prime Minister Abe has promised foreign investors to make Japan a country in which it is “easy to do business”, and has driven various policy changes to attract foreign companies; corporate tax reform, strengthening of corporate governance and other improvements in the business environment, regulatory reform in pharmaceutical/medical appliances, power/energy and other areas, and establishment of National Strategic Special Zones have resulted in a steady expansion of business opportunities in Japan.

Additionally, an Investment Advisor Assignment System was established in March 2015 at the initiative of the Prime Minister through which State Ministers and other experts act as advisors to companies that have made significant investments in Japan, encouraging an environment in which foreign companies can easily consult with the Japanese government.

In April 2015, the Tokyo One-Stop Business Establishment Center was opened in the JETRO headquarters for centralized and simplified procedures for business setup in the Tokyo Area.

For many years, Japan was recognized as a high-cost country at home and abroad, but this is no longer the case today. Office and house rents in Tokyo are now low compared with Hong Kong and Singapore. Similarly, managers’ salaries in Tokyo are lower than those in Singapore. This way, Japan has developed a business environment on par with other countries in terms of access to the market, business environment and costs.

The JETRO Invest Japan Report 2015 will be of interest to foreign companies considering business in Japan and provides valuable information about diverse investment opportunities in Japan.

More business news from the BCCJ:

The Impact of EU Renegotiations on Business Opinion