The jobless rate increased to a seasonally adjusted 3.3 percent, up 0.1 percentage point from the previous month, according to the Internal Affairs and Communications Ministry’s preliminary report.

Separate data showed the country’s job availability remained unchanged at 1.28 in February, meaning that 128 positions were available for every 100 job seekers.

Despite the rise in unemployment, Japan’s employment situation remains on an improving trend, a ministry official said, noting that an increasing number of people sought better employment conditions. 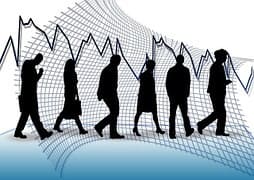 The number of people leaving jobs voluntarily rose a seasonally adjusted 3.5 percent to 880,000.

With an improving labor market viewed as necessary to spur the Japanese economy, analysts are watching whether strong demand from companies for workers will lead to wage growth, which could help encourage private consumption.

The unemployment rate for men rose 0.2 percentage point from the previous month to 3.6 percent while that for women fell 0.1 point to 2.8 percent, according to the ministry’s preliminary data.

The medical and welfare sector and the hotel and restaurant sector saw workers increase in February on a year-on-year basis. But the manufacturing and information technology sectors marked declines.

Japan’s economy remains weak despite efforts by the government of Prime Minister Shinzo Abe and the Bank of Japan to revive it.

Sluggish private consumption, with another sales tax hike planned next year, is seen as a bottleneck for the world’s third-largest economy.

Household spending, a key indicator of private consumption, marked the first year-on-year rise in six months, the ministry said in a separate report.

Average monthly household spending in February gained an inflation-adjusted 1.2 percent from a year earlier to 269,774 yen ($2,379).

That rise, however, came because 2016 is a leap year, a separate ministry official said. Household spending dropped 1.5 percent from a year earlier without the special factor.

“The trend of weak consumption hasn’t changed,” said Satoshi Osanai, an economist at the Daiwa Institute of Research, adding that wage growth is an important factor to watch.

“I expect the calls to mount for steps to stimulate consumption,” Osanai added.

Spending on food and health care were among the major gainers in February, up 3.3 percent and 13.1 percent, respectively.

Warm weather conditions prompted households to spend less on clothing and utilities, the data showed. Expenditure on clothes such as sweaters dropped 6.3 percent and that for electricity, gas and water 3.2 percent.