Japan’s Future Lies in the Hands of Robots, Women and Foreigners

Written by BCCJ
January 20, 2015
Diversity & Inclusion, Past Event Round Ups 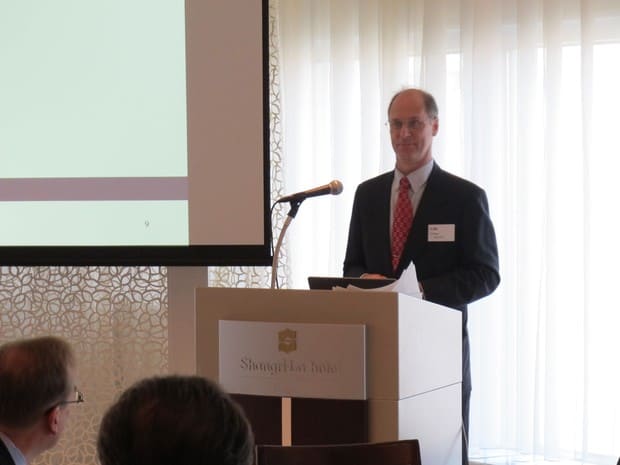 Written by BCCJ
January 20, 2015
Diversity & Inclusion, Past Event Round Ups

This morning at the Shangri-La Hotel Tokyo, over 40 BCCJ members and guests gleaned predictions on Japan’s economic and political direction for the coming year, from keen Japan observer William Sposato.

Former Deputy Bureau Chief for the Wall Street Journal in Japan, William began the breakfast session by introducing one of his favourite quotes about the country from Willem Buiter, Citigroup’s chief economist: “Japan is the hardest economy in the world to understand. If this were physics then gravity wouldn’t work in Japan.”

Despite the flow of global markets and spread of multinational corporations, it seems that there are still things that remain unique to the world’s third largest economy.

During the presentation, William pointed to potential scenarios that could unfold in the coming year and the possible effects of these on the market.

He reminded the audience of Abenomics’ three arrows – fiscal stimulus, monetary easing and structural reform. So far the biggest success has come from monetary easing, followed by fiscal spending.

Abenomics, which Sposato quickly dubbed “Kurodanomics” after Haruhiko Kuroda, the current Governor of the Bank of Japan, has been focused on achieving 2% inflation in 2 years. Media reports last year suggested that this mission has been successful.

But the third arrow, and the one that could have the biggest impact on foreign investors – implementation and acceleration of a growth strategy through structural reform – continued to remain elusive and cause confusion due to the large number of initiatives it encompasses.

Some of the most important structural reforms aim to maintain production capability through staging a robotic revolution, utilising overseas talent, and encouraging the economic participation of women.

Sposato quipped, “so Japan’s future lies in the hands of robots, women, and foreigners”.

The Government has stressed great importance on ensuring real wages rise faster than inflation this year and how economic recovery has to be felt across the entire nation. However, with the lifetime employment mindset still ingrained, employers are cautious about hiring new people. Sposato argued: “by allowing companies to fire employees more easily, they will hire more of them”.

Sposato also outlined some possible pitfalls for Japan in 2015. Abe could lose focus and consequently economics could take a back seat; the continuing undercurrent of a shrinking and ageing population could lead to the loss of 200,000 potential consumers; and, the great likelihood that immigration will not be approved on the scale necessary to offset the demographic challenge.

But Sposato, a long-term resident of Japan, ended on a positive note and claimed that the country can again be a global leader – this time not for huge economic growth and world class exports – but by leading the way through the “post-consumer era”.

LOHAS, for example, an eco-friendly brand of a bottle of water produced by CocaCola Japan that stands for Lifestyles of Health and Sustainability, has taken off in Japan in a way that had not in the States. The 520ml bottle weighs 12 grams, 40% lighter than other water bottles, and can be easily crushed when emptied.

The BCCJ remains positive that with the growth strategy in place, Japan could once again become the most innovative country in the world.

About the speaker: William Sposato has been based in Japan for 17 years and has extensive experience of covering Japan for media outlet.. He is former Japan Editor and South Asia Editor for Thomson Reuters and former Deputy Bureau Chief for the Wall Street Journal in Japan. He was also a Partner at Kreab Gavin Anderson, and currently writes on macroeconomic issues and monetary policy.

“I thought that today’s event was excellent.”