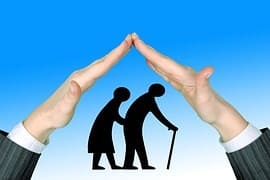 According to 2015 census data released by the Internal Affairs Ministry, people aged 65 or over now make up a record 26.7% of Japan’s population of 127 million – an increase of 3.7 percentage points since the last survey was conducted in 2010.

One of the serious concerns associated with this population change is the increasing number of people leaving their jobs to care for elderly relatives. This not only affects the livelihood of the people who feel obliged to leave their job, but also threatens to deplete the nation’s labor force at a time when its working-age population is rapidly decreasing.

Approximately 100,000 people leave their job each year to care for their ill or incapacitated parents and other relatives — with workers in their 40s and 50s accounting for a majority of such people, according to the Internal Affairs and Communications Ministry. This number is increasing rapidly.

Another survey by the Internal Affairs and Communications Ministry shows that some 2.9 million workers, 4.8 percent of the nation’s workforce, are providing nursing care for family members while continuing to work. A private sector estimate says that if workers who do not inform their employers that they are caring for relatives at home are included, the number would increase to 13 million people, or 20 percent of the workforce. It should be noted that workers in their 40s and 50s — who should be playing key roles in their workplaces with their experience and accumulated skills — account for about 60 percent of the people who are caring for relatives while continuing to work.

The proportion of women leaving a job to care for ailing relatives is particularly high, but the number of men has also reportedly been rising in recent years, as has the number of younger workers.

The phenomenon is attributed to a combination of factors. One is the significant increase in the proportion of elderly people in the population. The number of over-80s topped 10 million for the first time in 2015.

Another is that the public nursing care insurance program, introduced in 2000 supposedly to reduce the burden on family members of caring for the elderly, is not sufficiently functioning as a social security system to meet growing needs. The nation’s total nursing care expenses have meanwhile shot up from ¥3.6 trillion in 2000 to ¥10 trillion.

The number of nursing care service providers is also failing to keep up with the growing demand, especially the tokuyo homes for elderly people who require intensive care. As of 2013, 520,000 people were on the waiting list to enter tokuyo facilities nationwide — roughly the same number as the current capacity of those homes combined. The number of tokuyo homes is rising, but not fast enough to accommodate the growing demand. About half of those on the waiting list — including people who require full support in their daily activities — are receiving care at home, in many cases requiring help by their family members.

Many nursing care service providers, meanwhile, face a chronic shortage in manpower. The average turnover of nursing care staff is high and recruitment is increasingly tough because the work is seen as physically demanding and the salaries of nursing care employees are typically far lower than the all-industry average.

The situation is projected to worsen in coming years. With the rapid aging of the population, the government estimates that the nation will need 2.5 million nursing care workers in 2025 — when all of the postwar baby boomer generation will have turned 75 or older — compared with about 1.5 million today. It is forecast, however, that at the current pace of increase, the number of care workers will fall short of demand by 380,000 a decade from now.

Currently, employees can take care leave for up to 93 days and are entitled to allowances from public employment security offices equivalent to 40 percent of their salary — an amount that will be raised to 67 percent this year. But they can only take such leave for one uninterrupted period within the 93-day limit. Once the employee returns to work, the leave cannot be taken again unless the care recipient develops a new ailment. The government is moving to reform the system so nursing care leave can be taken up to three times for the same ailment within the 93-day limit. The law is expected to be amended in January 2017.

Workers can currently take five paid days off a year to care for ailing relatives. People normally use these days to carry out such tasks as applying for benefits under the nursing care insurance system, communicating with care managers and visiting nursing care facilities. Proposed reforms will enable them to take paid care leave on a half-day basis, instead of a full day, so they can use their time more efficiently.

Workers caring for relatives are also entitled to such measures as flextime work shifts and shortened daily work hours within the 93-day limit. The Labor Policy Council of the Health, Labor and Welfare Ministry has proposed that the period be extended to up to three years and that such workers be given the right to request exemption from overtime.

Prime Minister Abe aims to resolve these issues by the early 2020s. Care organisations have called for legislative changes, but also urge companies to offer more support in the workplace and to actively encourage more flexible working hours.