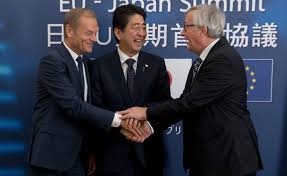 Japan and the European Union are in the final phase of wrapping up a wide-ranging agreement on free trade early next month, seeking to strike deals on sensitive issues, such as access to the agriculture and automobile markets.

The bloc is also eyeing an immediate elimination of tariffs on around 80 percent of auto parts exported from Japan, which currently stand at 3 to 4.5 percent, the sources said.

Progress on the auto negotiations would be a boost for Japan, which in 2016 exported some 600,000 cars to the EU. In return, however, the bloc is likely to force Tokyo to make concessions on agricultural access.

The EU is urging Tokyo to cut tariffs on products such as cheese, wine and lumber, while the Japanese side is reluctant to open its agriculture market, especially more than it agreed to for the failed Trans-Pacific Partnership pact signed in February 2016.

The talks would come a day before a meeting of the Group of 20 major economies kicks off in Hamburg, Germany.

At their previous meeting in May, the three leaders confirmed their desire to reach an agreement on fundamental elements of the FTA as early as possible and said that the deal is “within reach,” the Foreign Ministry said.

Abe is eager to accelerate talks on the Japan-EU FTA after U.S. President Donald Trump announced his country’s withdrawal from the TPP soon after taking office in January.

“Amid moves promoting protectionism, as seen in Britain’s exit from the European Union and in the policies of President Trump, Japan is looking to strike a broad agreement with the European Union as soon as possible,” a senior Foreign Ministry official told a group of lawmakers from Abe’s ruling Liberal Democratic Party on 16 June 2017.