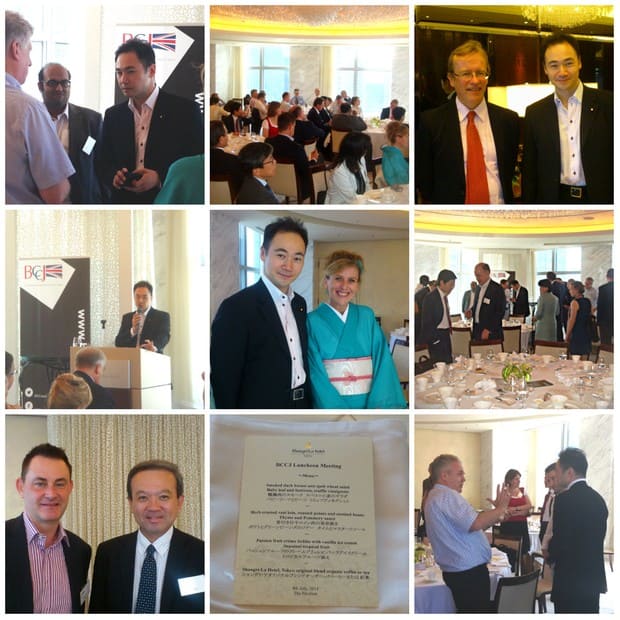 Keisuke Suzuki, Liberal Democratic Party (LDP) politician and one of the youngest members of the House of Representatives in Japan, shared the country’s ruling party’s views on and plans to take forward the “third arrow” of Abenomics at a BCCJ lunch held at the Shangri-La hotel Tokyo, yesterday.

Graham Davis, head of BCCJ events, reminded the 60-strong audience that Abenomics, the government’s action plan to revive the nation’s economy, is based on the “three arrows” of fiscal stimulus, monetary easing, and structural reforms.

He later added that structural reform was necessary for the long-term prosperity of Japan in the face of an aging population, accelerated global competition and Japan’s geo-political situation – including its relationship with China. “The reason we raise this kind of reform agenda, “the third arrow”, is very simple if we think about the future of the country,” Suzuki said.

It’s important for immigration rules to be loosened, he said, though this kind of reform should be tackled “step by step” to avoid encountering social problems. Recent measures taken by the Japanese so far include the extension of the three year visa limit for overseas workers to five years, and plans to relax rules for “normal labour” by 2020.

Suzuki reported there is something of a power struggle between the more conservative members of the LDP, who have strong links with the agriculture and construction industries, and the cabinet, which is stressing an immediate need for reform. “The cabinet really wants to promote the third arrow. Prime Minister Abe’s political asset comes from the strong commitment to the change agenda,” he said.

Suzuki added that the LDP faced three challenges in the short term: the cabinet reshuffle expected in September 2014; the restarting of nuclear reactors; and the proposed second hike in consumption tax, to 10%, scheduled for October next year.

In an extended Q&A session, Suzuki was asked about changes to taxation. He explained that the government’s current plan is to reduce corporation tax to “20-something” percent and suggested that the next stage of the consumption tax hike (to 15%) could be viewed as a significant source of revenue for Japan, alongside other possible moves towards “business-friendly” tax policies. “We could then make a shift from corporate and income tax, to consumption tax.”

Japan’s bent for cross-shareholding was also a hot topic. Suzuki explained that the government would prefer for companies to decide for themselves whether to make changes, and acknowledged the debate was still ongoing.

In terms of labour market reform, Suzuki said it was “inevitable” that Japan’s tradition of lifetime employment would come to an end for white collar workers, but not necessarily for blue collar workers. He said: “Setting salaries depending not on how long people have worked for the company but on the results of their work could be the first step in changing the lifetime employment system.” He added it was vital that women, overseas workers and the elderly had more participation in Japan’s workforce in order to secure the future prosperity of the nation.

When asked about PM Abe being seen as “hawkish” and right-wing by the international media, Suzuki said he believed the PM to be a lot more balanced than reports might suggest. “I think he is about 7% hawkish and 93% realist.”

Suzuki was also asked about investment within Japan. He explained that it is important to encourage risk-taking, despite this not been a part of traditional Japanese culture. “In Japan, the nature of the people is ‘followship’ – not to be original or unique. The way of investment is to follow other investors.” He said that during the economic boom of the 1980s there had been greater risk-taking in Japan than in the following two decades.

Suzuki also said the recent sexist heckling of a female member of the Tokyo Assembly by male LDP member Akihiro Suzuki was “a shame” and that he hoped such behaviour would become a thing of the past.

Suzuki was also asked about the areas in which he thought Japan could potentially become a world leader. He said Japan could become a model for how to: deal with an aging population; lead the way in Asia; encourage women to enter and stay in the workforce; and also use its strong record as an energy efficient society to advise other nations on how to become greener.

REMINDER:
Whatever the media hype, taking on corporate governance, agriculture, immigration and other key topics are huge undertakings for Japan, each of which could  have huge effects on the future of the country.