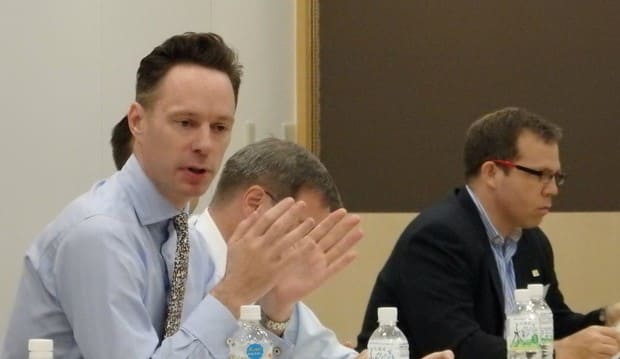 The group heard about the progress of Abenomics so far, and also had the opportunity to share their experience of and insights into the Japan market.

Tom began by explaining that Japan’s national debt, which stands at around 245% of GDP, was a cause for cause, and compared it with the UK at around 90% and crisis-hit Greece at 171%.

“The issue is that this debt is structural rather than cyclical. Some degree of debt is a recognised part of the business cycle, but structural debt is far more serious. It suggests there are long term issues with the economy that are potentially very serious. To put Japan’s situation into perspective, Japan’s debt servicing costs per annum are roughly equivalent to Singapore’s GDP.”

The Japanese government has set 2020 as a target date for balancing its books. This is a challenging target that won’t be easy to reach.

Japan faces the widely acknowledged problems of its ageing population, low productivity levels and less tax revenue than it needs in order to meet its spending commitments. “The government needs to secure more tax revenue but it’s finding it difficult to find that money. It raised consumption tax last April but and will do so again in 2017 but that hasn’t been easy.

The Bank of Japan has undertaken a massive quantitative easing programme, injecting JPY 80 trillion into the economy each year with the aim of bringing inflation to 2%. “We are now just over two years in (to quantitative easing) and inflation is still at 0%. People are beginning to ask: “Is this policy working; when are we going to see signs of inflation?”

Asked why inflation was considered necessary for a prosperous economy, Tom said that provided it was not excessive it acted as an incentive for people to buy sooner rather than later in order to avoid rising prices, and that deflation constrains spending, investment as well as, for example R&D which in turn stifles innovation. “With deflation, people tend to hold back on purchases in the expectation that prices will get even cheaper, and that’s been the case in Japan.”

Tom suggested that in some mature economies it might be necessary to reduce expectations around economic growth. “In an advanced economy is growth of around 0.5% a more realistic expectation?“ 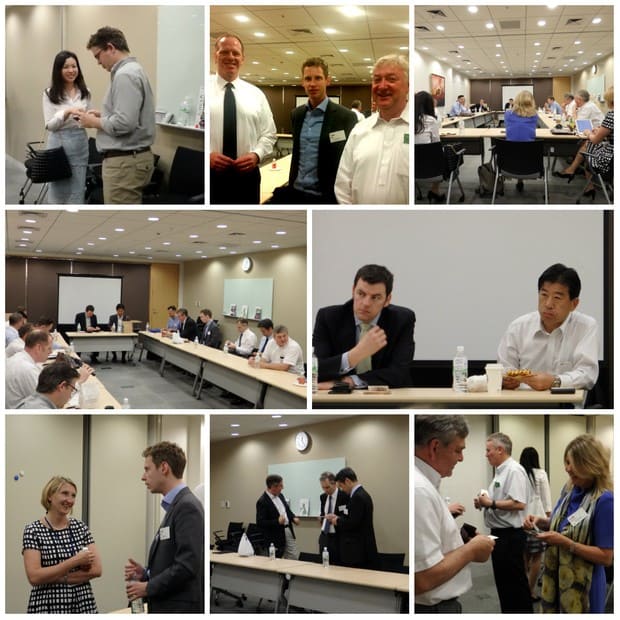 The Nikkei has reached a 15 year high. But Tom suggested caution when using this indicator to assess Japan’s economic health. The Nikkei is rising higher and faster than stock markets in other developed economies but this is not necessarily reflected in the ‘real economy’.

The third arrow of Abenomics relates to structural reform, and so far this has been the slowest-moving of the three of Prime Minister Abe’s economic measures. Japan’s labour market is relatively inflexible and inefficient compared with other countries, and average productivity is low. Abenomics promised to free up the labour market and also remove some of protectionist policies surrounding industries such as farming.

BCCJ members commented on the mixed priorities of Japanese organizations, that put the need for productivity against the need to keep an ageing population in employment and a system of lifetime employment with often age-related promotions. Tom acknowledged that Japan’s labour market displayed some distinctive characteristics.

Members also raised frustrations with the close relationship between some Japanese corporations and the government, for example Japan Tobacco which is required by law to have one third of its stock owned by the Japanese government. The tobacco industry is subject to heavy price control and manufacturers are forced to use domestically grown leafs with are not competitive with crops grown overseas.

He added: “The third arrow of Abenomics has to work. The first two can be 100% successful but if the third arrow does not work Japan will still face enormous challenges.

The sessions also touched on the current trade talks between Japan and the EU over the proposed EPA (Economic Partnership Agreement), and the TTP (Trans Atlantic Trade Partnership) with the US. The trade deals would mean Japan had to change some of its industry practices to be in line with its partners, forcing certain reforms. It would also help open up a number of sectors to increased competition.

Tom said that signing up to these deals would mean accepting that there would be winners and losers but that it would ultimately offer opportunity for long term gains.

BCCJ members suggested encouraging FDI (foreign direct investment) would be a way of stimulating investment in Japan. Tom noted how Japanese investment in the UK has indeed led to mutual benefits.

Womenomics was also discussed, with members citing a lack of childcare as a major issue for mothers wanting to return to work. Another barrier for women in the workplace raised was cultural mindset, with members giving examples of how even HR departments might still consider certain roles to be women or men-only and sharing stories of resistance to change. Guests pointed out that although more than 40% of highly educated citizens are women, only 11% of lower level management and just 1-2% of top level management were female.

BCCJ members also agreed that Japan needed to do more to encourage bilingual young people to see Japan as a country with long-term opportunities on offer, and particularly to nurture a future generation of entrepreneurs. Tom said: “Japan is sometimes perceived as risk averse. There is not lack of talent but risk-taking is not necessarily rewarded.”

The consensus was that Japan was not progressing quickly enough with reform, but members were unsure how business leaders, many of whom are due to retire over the next few years, could be motivated to implement change. Some members were concerned “creative destruction”, where change is forced by a period of great economic hardship, might be necessary.

Tom thanked BCCJ members for their insights as business leaders in Japan. “There are lots of opportunities here and we want to keep Japan at the forefront of people’s minds in the UK.”