At a fully-booked breakfast session on 5 April 2016, William Sposato, writer and media adviser, former Deputy Bureau Chief for the Wall Street Journal, and Editor Japan for the Reuters news agency, spoke to an audience of BCCJ members and guests on the hot topic, “Is Abenomics Dead?”

Sposato, who last spoke at the BCCJ in January 2015, opened the session by highlighting the topics currently capturing media interest in Japan such as the latest economic data; the labour market and the upcoming wage round; BOJ and negative interest rates; structural reform; consumption tax increase; and Japan’s aging demographics.

Sposato’s collection of current economic headlines published by foreign media, illustrated that the majority of reports on Abenomics to date have taken a decidedly negative stance, portraying Japan’s economy as having made little progress since PM Abe took office.

Sposato warned that such headlines were overstated and that sweeping statements oversimplify a significantly more complex and long-term issue. “Editors want good stories and catchy headlines, so enterprising reporters can  cherry pick economic data and find an economist to support their version in order to create copy that sells even if this is not necessarily an accurate reflection of the situation”.

Sposato then presented to the audience the key goal of Abenomics, namely “demand-driven growth that becomes self-sustaining” and the chain reaction sought by the Japanese government:

Sposato reminded the audience that there are various indicators for evaluating a country’s economic growth. Critics who look at real GDP growth figures to assess Japan’s economy will argue that little or no progress has been made since Abenomics first hit the headlines. On the other hand, from a nominal GDP perspective, it is evident that aggregate market value has increased.

The key issue facing Japan, Sposato argued, is the labour market. The good news, he said, is that the jobless rate is now at 3.3% (February 2016 figure); and there are 1.28 jobs for every applicant (the highest rate in 24 years). In addition, the female participation rate has increased sharply – in fact the 25-54 age bracket is now higher than that in the US; and private-sector data indicates that wages for temporary workers are now on the rise.

The Bank of Japan’s monetary easing program is designed to raise inflation expectations to 2 per cent, and thus provide a mechanism to co-ordinate wage and price inflation. In the first two years of Abenomics, companies responded to government pressure for increasing wages, but this year, Japanese companies have markedly slowed the pace of wage growth. “For Abenomics to work, higher prices must coincide with higher wages; otherwise, people will be worse off and therefore even less likely to spend” said Sposato.

The speaker raised several points seldom discussed when talking about wages, including the fact that wages are not directly related to corporate profits, that they will only be raised when companies feel it is needed to keep and attract talented employees. With uncertainty about the future, employees are in any event unlikely to be interested in changing jobs. This represents challenges (and opportunities) for headhunters.

Japan’s demographics also play a significant role. Sposato said, “The ratio of the old to people of working age is set to deteriorate, so there will be conflict between workers, who have labour market power, and pensioners, who have political sway. If pensioner voting power results in higher taxes on workers to support the current levels of pensions and healthcare, workers will demand higher wages.”

The working-age Japanese population has contracted by 6 percent over the past decade, and Japan could lose more than a third of its population over the next fifty years. 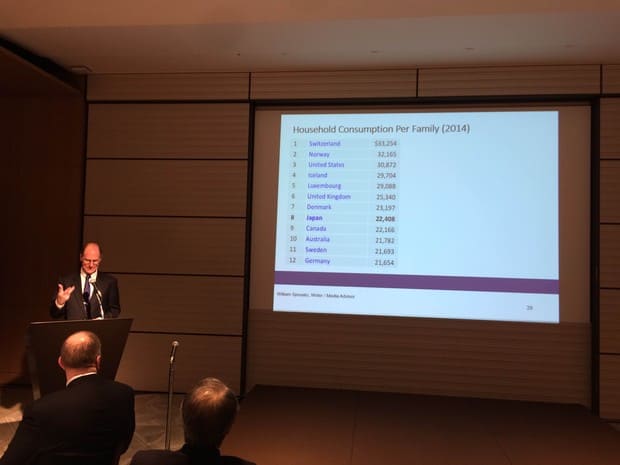 In February, the Bank of Japan (BOJ) instituted negative interest rates of -0.1% on some of the deposits it holds for commercial banks in another attempt to force them to put their massive holdings to better use. This was also an attempt to counteract the effects of falling oil prices as well as China’s slowdown, to encourage banks to lend, and to keep currency in circulation in order to stimulate the economy.

The impact of central bank currency manipulation is hard to gauge, and many questions remain unanswered. The speaker posed questions that the banks have not yet answered such as “What do they do in terms of depositor accounts?”, “How will they buy and sell bonds?”, “How will they keep collateral?”. “Negative interest rates are a relatively untested monetary tool and carries with it a high risk”.

The market reaction was very severe and probably overdone. Japanese Government Bond (JGB) yields reached record lows, after yields at an auction for 10-year bonds went under zero for the first time on March 1. Sposato explained, however, that the negative interest rate  imposed by the BOJ applies only to a a certain type of deposits the commercial banks park at the BOJ and he predicted that the bond markets would soon recover some stability with positive –if very low—JGB yields returning.

Inflation and the yen

Sposato argued further that an unseen threat in Japan is cost-driven inflation that effectively reduces the purchasing power of consumers and companies and would be difficult to combat. He said that this is an issue that is not being discussed openly. However, as an importer of oil, how will the Japanese government manage cost-driven inflation if oil prices return to $50 a barrel or higher and the inflation rate rises to 4%? Just one of many questions that remain unanswered.

Sposato continued to address factors such as the price of the yen, over which there is a lot of disagreement. “The weaker yen can drive up the price of imports, which can dampen consumer demand and lead to reduced spending. But at the same time, falling global oil prices, which have dropped from more than $100 a barrel in 2014 to around $30 a barrel in 2016, have exacerbated Japan’s deflation troubles. With cheap oil and a stagnant world economy both likely to continue for the foreseeable future, boosting Japan’s economy will be even harder.”

Moving towards a conclusion, Sposato said there is a view that – “Japan must export or perish”. Sluggish exports compound poor sentiment in Japan and exports have been below expectations despite the weakening of the yen under “Abenomics.”

Sposato cited Toyota as an example, revealing that 70% of Toyota cars sold in the US are also made there. Since the yen falling by 40%, exports from Japan have dropped 2-3% per year and some of Toyota’s cars have a higher US content than those from Detroit’s “Big Three” automakers.

“Progress on agriculture reform gave a boost to the Trans-Pacific Partnership (TPP), but Japan’s agriculture industry and angry blue-collar workers have lobbied against the deal, objecting to the removal of high tariffs and other protective measures. Health-care providers and other sectors have also complained of the deal’s potentially adverse affects” said Sposato. Japan’s internal lobby is strong.

In the subsequent question and answer session, Sposato responded to diverse questions on policy, demographics, consumption tax, Japan-China economic relations and the media.

He emphasised that deeper structural changes are required, and conceded that without greater consumer demand based on increased wages – which have fallen 9 percent in real terms since 1997 – or a major demographic shift, the Japanese economy would continue to struggle.

In conclusion, Sposato highlighted long term trends such as consumers becoming increasingly tired of buying, Japan’s rapidly shrinking population, and the fact that technology might have sped up, but that economic cycles have proven to be no faster than before and may actually drag on longer than before.

Will Japan find a way out? Is Abenomics dead? “It’s still to early to say”, said Sposato “It will take at least another five years before we have the answer.”