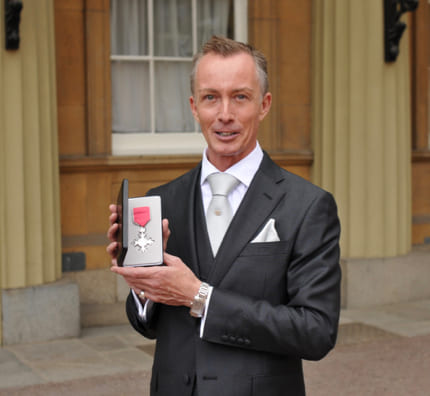 ***Warmest congratulations to Guy Perryman on being appointed Member of the Order of the British Empire (MBE) for services to British music in Japan.***

Guy was awarded Person of the Year at the 2013 British Business Awards by the British Chamber of Commerce in Japan for contribution to promoting British music, fashion and culture in Japan. He has been on the Executive Committee of the BCCJ since 2016.

In 2017, Guy was included in the British New Year Honours List, and on the weekend of June 17th, was appointed Member of the Order of the British Empire (MBE) for services to British music in Japan. MBEs are awarded for an outstanding achievement or service to the community which have had a long-term, significant impact and stand out as an example to others.

The BCCJ interviewed Guy to learn more about his experience of receiving such a prestigious honour:

How did you feel when you arrived at the Palace?
Driving down the Mall, arriving at Buckingham Palace at 10am and seeing the Royal Standard flying was the moment when I thought “Wow, this really is happening!”. I was very generously loaned a Jaguar motorcar for the occasion from Jaguar LandRover. Driving at walking pace with a police escort through the crowds of tourists waiting for Changing the Guard and all of them clicking cameras and looking into the car to see if it was a member of the Royal family arriving was quite an amazing feeling – rock star Royalty! Actually my Mum, who came with me to the Palace, has been told over the years that she looks a bit like the Queen so we giggled that perhaps we had just made someone’s day! I guess I was just seen as the chauffeur.

What impressed you most about the Palace?
The Palace interior is incredibly ornate, thick red carpets and huge paintings in gold frames with the aroma of polished furniture and perfumed guests, but the most striking and lasting impression I have is the extremely warm welcome from everyone at the Palace, from the police and guards at the gates to the ushers and officials, absolutely everyone was relaxed, genuine and friendly. That in itself is what really made the occasion feel special, because they made all of us recipients and our guests feel special.

What was the procedure when you arrived? Was there anything you didn’t expect?
On arrival there was the expected security, invitation and ID checks but all carried out discreetly, swiftly and in a very friendly manner. But I think what surprised me most about the day was the festive atmosphere. All honour recipients and guests were so happy and privileged to be part of something so special that the collective mood and emotion was infectious. Everyone chatted and shared stories with whomever you happened to be near.

Who presented the MBE to you and what did you talk about?
Prince Charles presented me the MBE and we had a very friendly relaxed chat. He spoke very gently and softly commending me on the achievement. He said it must be wonderful living and broadcasting in Japan, I agreed. I also cheekily told him that I had DJ’d for his son the Duke of Cambridge a couple of years ago in Tokyo. He suddenly looked a tad concerned, but I added, it was not in a place of ill repute but at a reception at the British Embassy. He laughed.

What did you do to celebrate?
My Mum and my partner were my guests at the Investiture, and then us three with my two sisters and an aunt who had been waiting outside the Palace gates like orphans joined us afterwards for a celebratory Champagne lunch at the Mandarin Oriental hotel in Knightsbridge. This was followed by a walk through Hyde Park in the late afternoon summer sunshine where we randomly bumped into another family who had also been at the Palace in the morning (we knew by the way they were dressed and the Buckingham Palace carry bag that all the ladies discovered in the Palace restrooms). The festive and friendly mood of the day just seemed to keep on coming.

How do you feel now that you have an MBE?
It is truly an overwhelming feeling that I cannot describe. It never really hit me when I first heard the news via a phone call from the then Ambassador to Japan Tim Hitchens last November. I thought my day at the Palace would really make the feeling sink in, but I still feel as if it’s all a dream. However I do have the photos and the medal in a very handsome case as proof of reality! I guess the best thing I can do is just get on with the work I do and play the music that I love so much which is the real reason for all of this.

The BCCJ extends it warmest congratulations to Guy for his remarkable achievements! Keep an eye out for the July edition of ACUMEN for Guy’s detailed article on receiving his MBE.