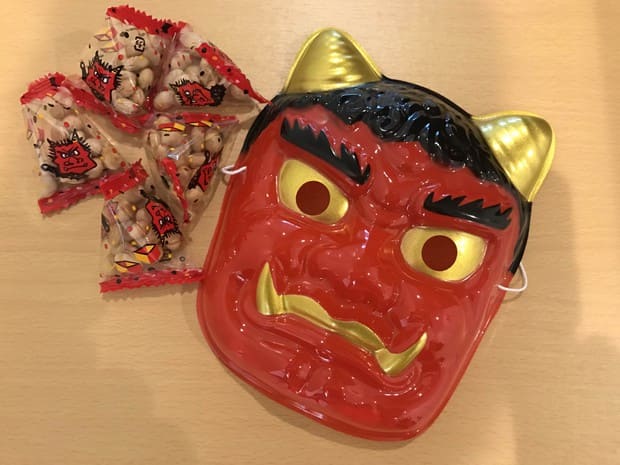 Setsubun (literally “seasonal division”) refers to the festival celebrated annually in Japan on February 3rd or 4th (in 2017 on the 3rd), marking the day before the start of spring according to the Japanese lunar calendar. It refers in particular to the first solar term (risshun) of the calendar; the day when the sun is exactly at the celestial longitude of 315°.

According to this system, spring was considered the beginning of the year, so setsubun can be regarded as an ancient New Years Eve. The new year was felt to be a time when the spirit world became close to the physical world and diverse rituals evolved.

Similar to the “spring cleaning” culture of the west, setsubun provides an opportunity to sweep away the cobwebs of the past year and welcome new beginnings.

Mamemaki (bean throwing) ceremonies are performed at home, in Buddhist temples and at Shinto shrines all around the country. In a rite of exorcism, the fukumame (roasted soybeans), are thrown out of the door or at a (usually male) family member who is dressed as an oni (demon) while the family shouts, “oni wa soto, fuku wa uchi“ (Demons out! Good luck in!).

The beans symbolically purify the home by warding off the spirits, which are believed to bring misfortune and bad luck with them. In order to invite fortune and happiness into the home, one must also eat the beans – one for each year of one’s life. Prominent temples in Japan will also have monks or celebrities showering large crowds of people with fukumame to drive away spirits and welcome the renewal of the coming new year.

Some families put up small hiragi iwashi decorations on their house entrances so that bad spirits will not enter. These talismans are made of holly leaves (a Shinto symbol) with either sardine heads, a clove of garlic, or an onion attached.

In the Kansai area it is customary to eat uncut fortune rice rolls called ehō-maki (“lucky direction roll”) in silence. Those who are able to accomplish this challenge (the roll is about 20 cm long) are promised luck with their business, longevity, and freedom from illness. In some areas, the rice roll  is made with a stuffing of seven colors which represent shichi fukujin (seven gods of happiness).

The BCCJ is already equipped with a bowl of roasted soy beans and wishes all its member companies and friends a year filled with business and personal success. Let the demons out and the luck in!