Inside the Olympus Scandal with Michael Woodford MBE

Written by Sterling Content
October 31, 2014
Past Event Round Ups 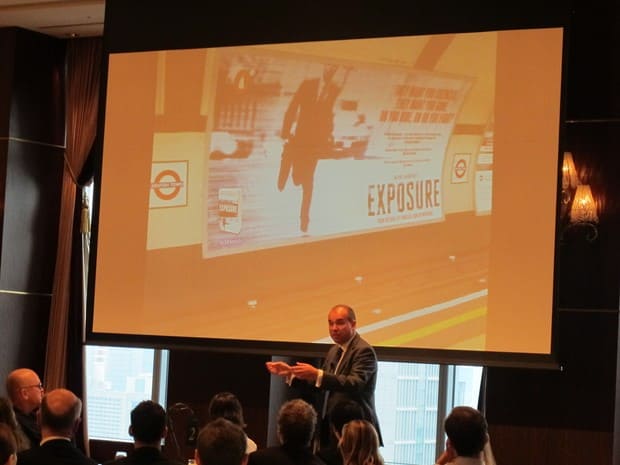 Written by Sterling Content
October 31, 2014
Past Event Round Ups

More than 100 BCCJ members and guests heard ex-Olympus President and CEO Michael Woodford MBE tell the extraordinary story of how he blew the whistle on an accounting fraud approaching $2 billion, in 2011. He had been company president for six months at that time.

British-born Woodford, an Olympus veteran of 30 years and the first ever non-Japanese CEO of the company, spoke for over an hour at a BCCJ breakfast event at the Shangri-La hotel.

Taking the audience through the key moments from when he first heard about possible accounting irregularities at the Japanese giant via a FACTA magazine article, to when he was ousted by the Olympus board on October 2011 for bringing the story to the attention of auditors, Woodford’s narrative was riveting.

A recurring theme was the strength of corporate governance in Japan: “Most business decisions in Japan are made outside of the boardroom”, said Woodford. “This is something that I wanted to change at Olympus”.

In 2011, financial magazine FACTA alleged that Olympus had made undisclosed payments for a series of acquisitions some of which had little connection with the firm’s “core” camera and endoscope business.

Woodford soon after began to write letters to his Chairman and board members regarding his concerns related to the company’s acquisition activities – often in diverse sectors such as recycling, microwave food, and facial care. He later copied letters to the company’s auditors, and threatened to resign if he did not receive satisfactory responses about the investment costs.

“Don’t put the fact that I am a gaijin (foreigner) before the facts”, Woodford, begged his Chairman and board when the scandal began to break.

The October 31 event also touched upon a more sinister side to corporate life in the world’s third largest economy.

Woodford explained to a captive audience how his decision to blow the whistle meant he had to be accompanied by a police guard for a time due to the scandal’s alleged links to organised crime.

By 2012 the scandal had developed into one of the biggest and longest-lived loss-concealing financial scandals in the history of corporate Japan.

After the entertaining and thought-provoking speech, Woodford handled a Q&A session during which he said he believed that the Japanese media failed to put large corporations under the microscope.

“When the scandal broke, the Japanese media acted like the press office of Olympus”. He went on: “much of the media in Japan is self-censoring, and deferential to listed companies. If you attack, you will be thrown out of the golf club”.

He also asserted that too much emphasis was placed on company loyalty. “While working in Japan I was often encouraged to take a mistress. But, NEVER EVER show infidelity to your company”.

After the Q&A session, guests were able to purchase a signed copy of Michael’s book, Exposure, with proceeds being given to charity.

“This really was a fabulous event”.

“One of the best speakers that I have had the pleasure to listen to. Very engaging”.

“A really insightful, thought-provoking event. Michael’s presentation met my expectations from your description exactly. It was interesting to relate to his description of Japanese behaviour, although thankfully I do not have similar difficulties! Great humor too! Thank you for organising”.

An introduction to Michael Woodford
Reviews of Exposure

This story is extraordinary. Michael Woodford the newly-appointed president and then CEO of Olympus wakes up to find that nobody is telling him the truth, facing an accounting fraud on a massive scale, approaching $2 billion. Even the chairman and the Head of Compliance and Governance are suspected of being in on it. The CEO faces a terrible dilemma that could put his and his family’s lives at risk.  Who can he trust? Certainly, not his own board. What lessons can be found in his experience about information and transparency in financial flows. Listen to his story, both hilarious and terrifying, as the decision he makes leads to the exposure of the scandal, the crash in the share price, the entire board’s resignation and him having to go around with armed police. This story will become a major motion picture, but is it so far away from what happens elsewhere? In today’s business climate, are the risks of these sorts of frauds more likely? How can regulation work when even the trusted guardians can’t be trusted? How much of this is going on right now? What would you do in Mr Woodford’s position?”

On the morning of October 31, join us to hear from Mr Woodford, who will give an extended account of those tense days, the subsequent fallout, and his views on corporate behaviour – and misbehaviour. Guests will also have the chance to buy Mr Woodfords book about the affair – “Exposure” (proceeds of which will be donated to charity).

See our Flickr site for full pictures from the event.