How to Mainstream Equality, Diversity and Inclusion in your Organisation 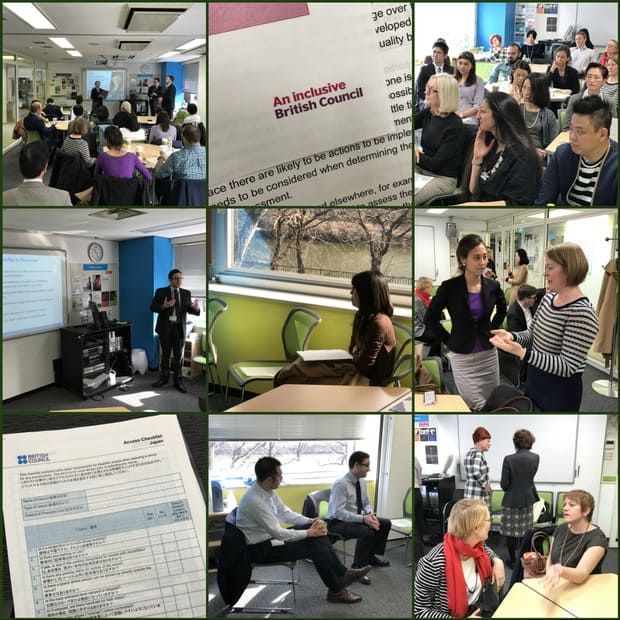 On 19 January, BCCJ members and guests attended an eye-opening training session at British Council aimed at raising awareness and developing capabilities in the area of equality, diversity and inclusion at work.

British Council is pioneering the mainstreaming of equality, diversity and inclusion. Japan Director Matt Burney opened the session by explaining to BCCJ members and guests how the organisation takes diversity into account as they develop and deliver processes and functions, considering it part of policy decisions, and building it into the planning of programmes and projects.

Equality is about treating people fairly, removing barriers and redressing existing imbalances, so that groups which continue to be disadvantaged gain access to opportunities for full participation in the workplace and wider society.

Diversity is focused on making the most effective use of the differences and similarities between people for the benefit of organisations and wider society.

Inclusion is about making all people welcome, allowing and encouraging all to participate.

Burney highlighted the fact that it is important for businesses to recognise that these issues are not only important to prevent discrimination and to boost creativity, but that improving EDI within a company can have huge benefits for business:

-Brings in different ideas which can help develop the business, increasing creativity and innovation

-Enhances the organisational image amongst a wider range of people

-Helps the organisation become an ‘employer of choice’

-Reduces the risk of a legal challenge of discrimination

Head of HR, Neil Shepherd, then introduced the bespoke tools utilised by British Council within this process such as the Diversity Assessment Framework which contains a series of indicators that help measure performance across key areas and the Access Checklist designed to establish the basic requirements for disability access when selecting a venue for an event.

Shepherd explained how all parts of the organisation are involved in submitting evidence of action taken against these indicators. This evidence is then centrally reviewed and generates a score. A detailed feedback report is also delivered, which helps the organisation measure progress in equality, diversity and inclusion (EDI).

Additionally, Equality Screening recognises any potential for unjustified discrimination that could be changed, or opportunities to promote equality that could be introduced. “This proactive approach builds diversity into an organisation’s work from the very start,” said Shepherd.

The speaker also gave examples of EDI training undertaken by all staff, including e-learning courses, webinars, and face to face sessions, which ensure an increase in awareness and improved skills in the area of EDI.

Shepherd gave an example from the British Council which involved their policy of providing free English lessons to the wives, husbands, and partners of all staff. It was discovered, however, that the policy did not include long-term girlfriends or boyfriends thereby excluding non-married couples. This problem was recognised and solved by requiring the employee either to show the juminhyou, a certificate stating those who share a home, or simply providing a self-declaration form based on trust.

Both speakers emphasised the importance of trust between an organisation and its employees and the positive impact this has on personnel relations and business performance.

Event participants learned that by taking some simple yet highly effective steps, a company can ensure an environment of equality and an organisation that includes everyone.

Many questions were raised in the subsequent Q&A on topics such as the time it requires for a company to introduce an EDI policy, how to measure return on investment, message localisation, global benchmarking data, EDI  legal framework and the status of EDI in Japan. Burney and Shepherd said that there was still room for development in Japan, but that there was a will. Both were confident that the 2020 Paralympics will play a major role in bringing about positive change.

As the UK’s principal cultural relations organisation the British Council is strongly committed to equality, diversity and inclusion. Their work is centered on building meaningful, enduring and respectful relationships across different cultures. Learn more about the British Council and EDI HERE