Governor Masuzoe: How the Olympics can change Tokyo 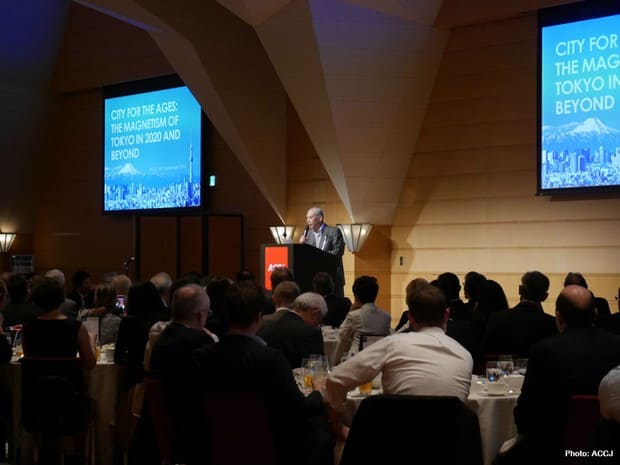 Today, BCCJ members and guests heard from Tokyo Governor Yoichi Masuzoe at a lunch event co-organised by the ACCJ.

The Governer outlined his vision for Tokyo in 2020 and explained how he saw the city’s hosting of the Olympic and Paralympic Games as catalyst for making Tokyo a better place to live and work, and becoming a “hydrogen society.”

He began by acknowledging the recent controversies surrounding the scrapping of the original plans for the Olympic stadium and allegations of logo plagarism, but said organisers were determined to overcome this and make the Games a success. ‘We want to stage the world’s best ever Olympics,” he added.

He said it was important to consider what philosophy and vision should underpin the Games. He referred to the spirit of post-war rehabilitation that surrounded Tokyo’s 1964 hosting of the Olympics. “With the bullet train opening before the Games – such a futuristic transportation mode – and the building of new highways in Tokyo, the 1964 Games was about motorisation. But there were some negative by-products. Urban planning was in a way non-existent. The cars (on Tokyo’s flyovers) are driven up above the rivers and it’s really an eyesore.”

He also explained he would like to see this upcoming Games turn Tokyo into a city that was more enjoyable to live in. “Fifty years everything was about money, how could we make money? But now people are asking, how can we enjoy life more?”

It seems Governor Masuzoe would like to see the highway flyovers removed and for Tokyo to become a city of waterways, or “a Venice of the East”. He said he wanted to see walkways by rivers and streams, which had over the years been covered by urbanisation, opening up. He refered specifically about work in Shibuya to uncover a small river.

Another hallmark project for Tokyo was the opening of a road between Shinbashi and Toranomon –  part of a traffic artery connecting Olympic sites. The road is known as MacArthur Road as it was originally conceived in post-war Japan apparently at the request by General MacArthur. Construction was delayed by homeowners refusing to sell their central Tokyo land. Governor Masuzoe asked that the road now be referred to as the Olympic Road, and explained how wide walkways along it will create a “pedestrian paradise” for the city. It is hoped the Olympic-driven development will resemble Paris’s Champs-Elysees, in parts.

To promote Tokyo as a foodie destination, he explained how traditional products such as beer, sake and pork were being pushed through food festivals.

However, Governor Masuzoe said his key ambition for Tokyo 2020 was for it to steer Japan towards becoming a hydrogen-based society. “A hydrogen society will be my legacy.” He pointed to Toyota’s Mirai car, which is powered by hydrogen fuel tanks. The car is being subsidised by the Japanese government, meaning it can be bought for JPY4m instead of the full cost of JPY7m. “There will be hydrogen stations built so that you can drive for just 15 minutes and find one.”

The Tokyo 2020 Olympic Village is set to become an experiment in hydrogen power, with electricity and heat being powered by hydrogen technology during the Games and afterwards when the area becomes something of a small town.

The guest speaker also shared his hope that in the future Japanese citizens would enjoy a shorter working week to allow for a more enjoyable work-life balance.

Speaking of Tokyo’s accessibility to tourists and also for its prospects as the regional’s major financial hub and business centre, Governor Masuzoe said: “The biggest problem for Tokyo is language, we have to raise the English-speaking level in Japan.’ He explained that an army of volunteers would support visitors in English.

He added: “We want to create an international financial centre here that works around the clock. To do that foreign companies have to find it easier to work in Tokyo.”  He added that steps were being taken to make starting a business more simple and quicker. “In Singapore it takes one week to start a business but in Tokyo it takes one month.”

Governor Mazusoe said he wanted to see Tokyo top the list of the five cities in the world for business and believed the Games could see Tokyo rise through the ranks. This list currently reads London, New York, Paris, Tokyo and Singapore. ‘2012 brought London to the position of number one in the world.”

In a Q&A session, Governor Masuzoe was asked by a manager from the hotel industry about whether Tokyo would benefit from more immigrant labour, as there was a shortage of workers in roles which in other developed societies are often taken by immigrants.

He said that Japan already had untapped labour sources, such as women and retirees in good health, that should be explored before opening the doors to immigrants. “We will start with the domestic workforce.” He said his own experiences of living overseas had let him to understand that immigrants could feel an “idenitity crisis” which could be problematic for Japan.