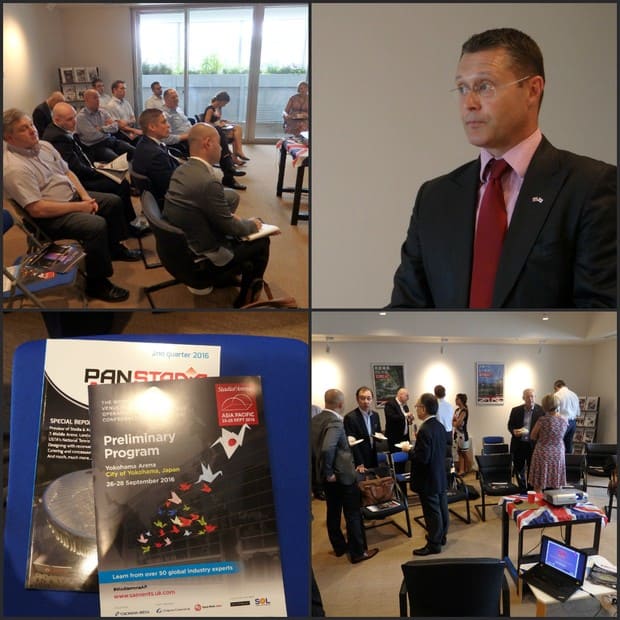 As Japan’s thirst for knowledge grows in the run up to the 2019 Rugby World Cup, 2020 Olympic and Paralympic Games, and the 2021 Kansai Masters, the country is undergoing a mindset shift around sporting venue management.

The appeal of Asia

The speaker opened the session by addressing the upcoming Stadia & Arena (S&A) conference which, following two consecutive years in Singapore, will be hosted in Japan this year: “Asia is a particularly appealing location as there is no other event like it in this part of the world, and Japan is currently acknowledged as the fastest growing market for sports event and venue development.”

Japan, said Levett, is an exciting place to be in the run up to the 2019 Rugby World Cup, 2020 Olympics, and 2021 Kansai Masters. “The country has a proud heritage of national sport and a strong entertainment viewing infrastructure; to name just a few examples; the successful J League, the baseball league, sumo, swimming, badminton, and basketball.”

The speaker also emphasised the current shift in Japan away from the traditional models of ownership and operation, with venues looked upon as cost centres by local prefectures, to commercial ownership and management by third parties – private-sector owners who run venues for profit.

Levett informed BCCJ members that the Sports Future Development Committee together with the Japan Sports Agency and Ministry of Economy, Trade and Industry are currently assessing the role of stadia and arenas in Japan, and investigating stadia trends overseas: “This includes the concept of smart venues (communities developed with a multifinctional and sustainable stadium or arena at their core), the utlisation of private-sector funds, the promotion of public-private collaboration, and the formulation of facility development guidelines.”

Levett emphasised the importance of stadia as an integral part of the community and neighbourhood, which should be designed as family-friendly destinations, both for sports and other events: “Stadium plans should seek to maximise the benefits and value for the local community, by improving amenities for residents, providing employment, and acting as a catalyst for local regeneration.”

“Japan’s stadium development must focus on maximising the commercial potential by incorporating a broad range of facilities and usages.The design should also incorporate the latest technological advances to ensure the best possible connectivity and facilities to a public that has increasingly high expectations,” advised Levett.

Levett encouraged his audience to attend the Stadia & Arena annual conference to be held in Yokohama Arena from 26-28th September 2016, which will bring together the world’s sports venue owners, operators and developers as well as the sector’s leading architects, designers, contractors, producers and suppliers.

The speaker said that the Yokohama Arena is a great example of the good work being done in Japan. With a total area of 8,000 square meters and a capacity of 17,000, Yokohama Arena is one of the largest multipurpose indoor arenas in Japan. It can hold music concerts, sporting events, shows, exhibitions, and a variety of other events. Yokohama Arena utilises state-of-the-art equipment such as 11,000 computer-controlled moveable seats, a large four-screen projection system and a ceiling capable of suspending more than 100 tons.

It is for good reason that Team GB chose Yokohama as their home for the duration of the 2020 Olympics.

The Japanese recipe for success

A diverse range of topics were addressed in the subsequent question and answer session. With regard to concerns expressed by members of the audience about Japan’s willingness to consider partners outside their own network, Levett reassuredly stated that while the Japanese have talent, they have little choice but to ask for external support as there are not enough people with the required skill sets and expertise. Levett emphasised that the UK was in a similar position upon getting involved in the 1980s/90s. Knoweldge exchange will be essential for success.

Levett also highlighted the incentives that Japan has, which other countries might not, to ensure the development of sustainable community-based stadia. “Future-proofing is highly topical in a society with the highest life expectancy in the world, and clever utilisation of space is paramount on a small, densely populated island.”

In response to a question about how international audiences might react to the more domestic atmosphere of Japanese stadia, Levett said that Japan as a strongly service-oriented country is very aware of customer expectations and the growing demands of the younger and more internationally-minded generations. “Japan will not disappoint.”

Levett concluded by encouraging all participants to further pursue collaboration with trusted partners, to continue networking and to make targeted one-on-one introductions, to support the delegations visiting Japan from the UK and vice versa, and to support Japan in delivering the best possible global sporting events in future.