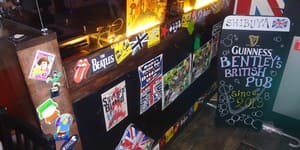 Looking for somewhere new to try over Golden Week? Here’s our guide to British gems in Tokyo

Bentley’s British Pub has recently celebrated its first year as a friendly western-style pub with a warm and casual atmosphere. It also offers various forms of entertainment including a disco night karaoke and occasional live entertainment.

The menu includes simple but traditional western food, along with a wide selection of bottled British beers, wines, cocktails and whiskies. The venue can also open for private parties and special functions.

Run by the wine experts at The Devil in the Grape, Parabola aims to combine excellent drink lists with music, art and design in a smart but casual environment. The menu includes fine wines and underrated gems from around the world, in an atmosphere that aims to “make wine drinking fun.”

The food menu evokes a UK gastro pub, with bangers and mash, an extensive cheese board and bacon sandwiches made with “serious” slices of bacon. Anyone for sticky toffee pudding?


Daylesford Aoyama aims to serve the best seasonal, organic food in Tokyo. They use Japanese organic produce to introduce to Japan the concept of REAL FOOD – the company’s trademark in England. The Aoyama store also includes a delicatessen, bakery and grocery area.

The company started out from a farm in Gloucestershire and now its Tokyo menu is inspired by UK favourites. Breakfast, lunch and dinner is available, including British-style pancakes, afternoon tea and sides of Toad in the Hole.

If you’re in the mood for a cider the UK owned and run Hobgoblin chain is a safe bet – they’re the biggest importers of cider into Japan. Other British favourites include salt and vinegar crisps and baked beans.

The pubs have a traditional and friendly feel, with a hearty menu including pies and fish and chips. Visit on weekends to try their all day Full English breakfast.

Since it was founded in Scotland in 2007, BrewDog has become a British success story. It landed in Roppongi with a bang earlier this year and brings its quirkily-named beers along with other craft ales from around the world.

The bar’s chef has cooked for names from Johnny Rotten to the Emporer of Japan and serves a food menu to complement the beers, while you choose from a menu on airport-style screens.