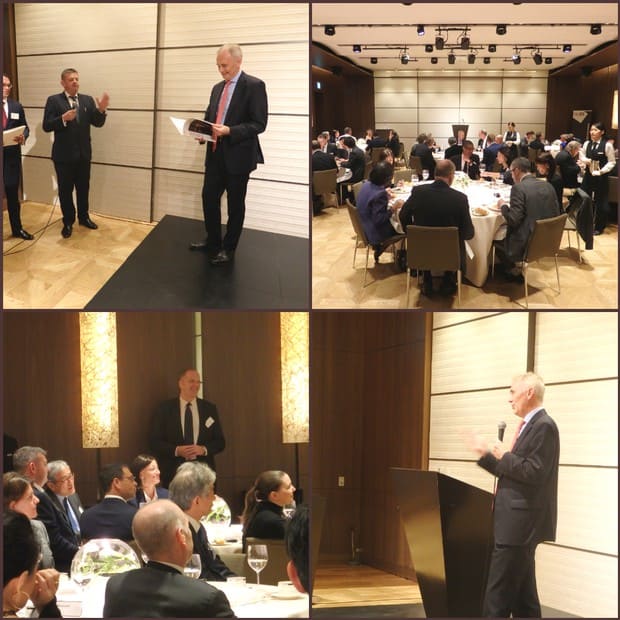 UK Ambassador to Japan since 2012, Timothy Hitchens CMG LVO, will finish his four-year term in December. BCCJ members gathered for lunch at the Grand Hyatt on November 16 to bid him a fond farewell and wish him all the best for his future role.

BCCJ members had the opportunity to ask the ambassdor questions about his diverse experiences in Japan, his achievements and future goals.

UK-Japan relations
The ambassador began by talking about his arrival in Japan in 2012, a time which he described as an calm period for UK-Japan relations. Over the past four years, however, “the situation became more challenging, mainly due to two factors: the UK’s policy and relationship with China, and the decision by the British people on June 23rd to leave the European Union”, which, he said, came as a big shock to both the UK and Japanese sides. The fundamentals of the relationship remain rock solid, the ambassador said, but it is no longer as strong as in the boom years.

Impressions of Japan
The ambassador revealed that during his time in Japan he had managed to visit all prefectures apart from Miyazaki. While each prefecture brought back meaningful memories, the place which left the strongest impression on him, he said, was Tohoku. “I have seldom heard such honest and direct stories as from the people of Tohoku, which is one of the reasons I chose to take Prince William there.”

When praised on his fluent Japanese and asked which Japanese word he liked the best, the ambassador said he was very fond of the many onomatopoeic expressions in the Japanese language, and that he had a soft spot for word play and puns. A phrase he said he particularly liked, and which was quite fitting considering recent political developments in the UK and US was ‘issun saki wa yami’, or in English, ‘what happens next, no-one knows’.

UK-Japan opportunities
Referring to the future of Japan-UK relations, Ambassador Hitchens spoke of the opportunities in inward investment, exports, and defence (missile technology, security, intelligence, and joint exercising). He highlighted the Typhoon jet visit from the UK – the first time the Japanese Air Self-Defence Force has exercised with anyone but the Americans – and the significance of this development in terms of future relations between the UK and Japan.

When asked how Japanese investors in the UK feel about Brexit, Ambassador Hitchens admitted there were concerns, but emphasised that from the moment the Brexit result was announced, the embassy had been working hard to to listen carefully to the questions raised by Japanese businesses and investors in the UK.

The speaker highlighted the fact that Japanese investors were among the first to to respond, and that the Keidanren were very prompt in establishing a Brexit Committee. “After listening carefully and assessing the feedback from the Japanese side, it was established that individual sectors had very different priorities. We now know what is necessary to satisy the wishes of these companies and this is being communicated directly to the UK government”.

Who’s next?
Ambassador Hitchens announced that his successor will be Paul Madden, who was First Secretary on the economic side in Japan in the early 1990s. Madden is also a Japanese speaker and has come from an impressive career most recently as High Commissioner to Singapore, then to Australia. “He knows the region, knows business well and will, I am sure, fit back in very quickly.”

“Once we have the EU-Japan EPA in place, bi-lateral trade relations between the UK and Japan will be very important; this will be a significant task for my successor; the CBI, the Keidanren and the BCCJ will need to think more about trade policy than before.”

Referring to the Olympics to be held in Tokyo in 2020, the ambassador said, “The UK has already sent over all its experts and shared its London 2012 knowledge. Key is that politicians are not in charge, but people who have the expertise. The Games should focus on visitors and have accountable professionals in charge”. The next ambassador will continue collaboration on the 2020 Olympics and try to ensure success on the commercial side.

The ambassador also expressed his satisfaction that a debate on the death penalty has begun. “The Japan Bar Association, after a visit we organised to London over the summer, has come out in favour of abolition. These things take a long time to achieve, but I feel confident that we have reached a turning point.”

A token of gratitude
To express the thanks of the BCCJ community, Editor in Chief of BCCJ ACUMEN, Simon Farrell, presented to Ambassador Hitchens a special edition of the magazine of the British Chamber of Commerce in Japan, containing the fourteen articles the ambassador contributed to ACUMEN, two interviews, and a collection of photographs illustrating the ambassador’s many achievements during his time in Japan.