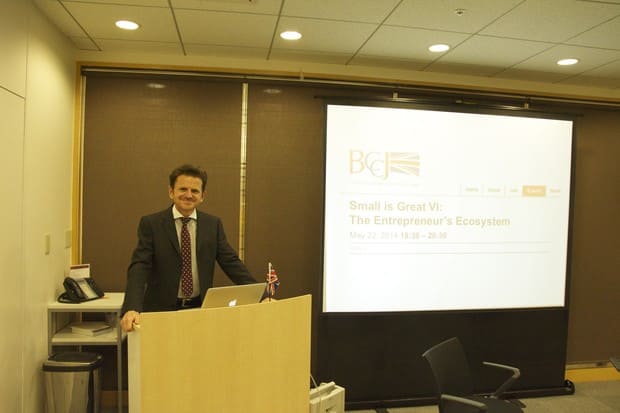 Steve, who is founder and CEO of Business Link Japan, explained how he had built up three companies since he started doing business in Japan 14 years ago.

Steve explained that although he had experienced some apparently chance coincidences, such as hiring a women who gave him directions at a train station, he had also made a point of being open to opportunities and keeping potential hires on his radar.

He said: “I do consider myself to be a lucky person in my career but of course we can’t just say that everyone who succeeds is lucky. I realised that what I’ve probably done reasonably well is put myself in positions where lucky things can happen.”

Another of Steve’s tips was on the importance of varying your client portfolio in order to stop the power in any one relationship becoming too unevenly balanced. “When you have a balanced portfolio you are in a better position to negotiate,” he said.

Steve, who took home a British Business Award in both 2013 and 2012, added that knowing when to break the mold was a key skill for a new business in the Japanese market. When he built his first company in Japan, Team Studio, his team used successfully used telesales at a time when this approach was unusual in Japan.

He also recommended investing in staff and rewarding hardwork, and finding skilled people to outsource to as ways to ensure success.

In a Q&A session afterwards BCCJ members quizzed Steve on how he managed his time, leveraged contacts within the British business community in Japan, and found the right employees.

The evening also included networking with a light reception and wines provided by BCCJ Entrepreneur member Parabola. Thank you to Regus Japan for kindly hosting the event.

See photos from last night’s event on our Flickr page