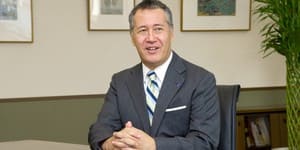 Mr. Risberg will assume the position on February 13, 2014 replacing Mr. Duco Delgorge, who stepped down from the office of EBC Chairman as of December 31, 2013 after two years of dedicated service in that position.

Chosen to lead the EBC from 2014 through 2016, Mr Risberg brings unique experience and an in-depth understanding of Japan following a long, exceptionally successful career in Japan. Mr. Risberg has worked in Japan as a senior executive for Philips Electronics for many years.

He has a long history with the EBC, having made significant contributions to the EBC as the organisation’s Vice-Chairman and as a member of the EBC Board of Governors in his capacity as a Committee Chairman Representative. Mr. Risberg has also served for several years as the Chairman of the EBC Medical Equipment Committee.

“I am honoured to have been elected and chosen to represent European industry in Japan at this critical point in time. With the global economy in recovery and Japan eagerly exploring a new model for growth, this is a crucial period to strengthen and redefine EU–Japan relations. The previous EBC Chairmen have made outstanding contributions to raising the profile of the EBC. Moreover, their efforts have ensured that the EU and Japanese authorities better understand business concerns, and are more aware of the need for crucial reforms and for the new paradigm of EU-Japan relations that will emerge with the conclusion of the EU-Japan FTA/EPA negotiations. I am looking forward to working with all EBC members to see these changes through.”   –  Danny Risberg