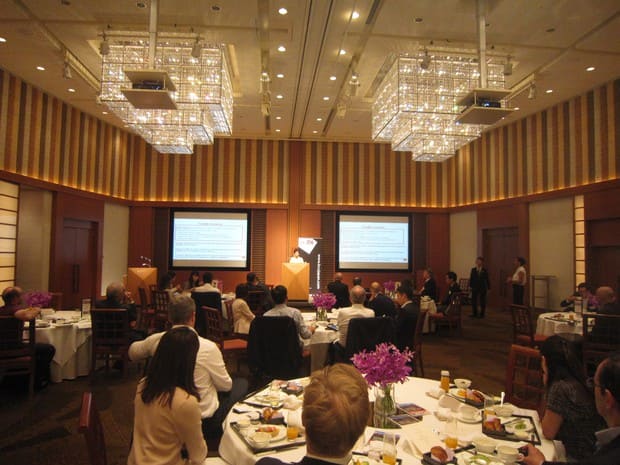 On 19th July, BCCJ members gathered for breakfast at the Peninsula Hotel to hear reflections and predictions on Japan’s economy from Dr Sayuri Shirai, a professor in the Faculty of Policy Management at Keio University and visiting scholar at the ADB Institute.

Dr Shirai opened her speech by explaining that, as a Bank of Japan (BOJ) Policy Board member from 2011 to 2016 she had supported the BOJ’s Quantitative and Qualitative Monetary Easing (QQE) and the 2% price stability target. In January 2016, however, she voted against the negative interest rate policy. She attributed her continued good relationships with officials in the BOJ, despite her decision, to her long-term neutrality and objective views about the Japanese and global economy as well as monetary policy issues.

According to Dr Shirai, it’s possible that Japan’s relatively high GDP might be more than 1% for the period of April, May and June 2017 but it’s not entirely reflective of the fundamentals of the economy. The favourable economic performance also reflects growing foreign demand in Europe and the US, construction and real estate activities, and temporary build-up of inventories.  As the ultimate purpose of the QQE was to stimulate “healthy” risk-taking behaviour by households, firms, and financial institutions, which had been lacking for a long time in Japan, Dr Shirai assessed that these entities on the whole remain highly risk averse and the QQE has not changed their behaviour fundamentally.

“Just by looking at BOJ GDP data you’d think that the Japanese economy is going quite well,” she said. “But there are differences between real variables—such as real consumption, real investment, real exports that constitute real GDP data—and the volume of the respective related data. If a Japanese company produces higher value-added products and therefore higher priced products—because of the improvement in the quality of their goods and services—that will be reflected as an increase in real value. That is welcome.

“However, when you look at the Japanese economy you also have to pay attention to volume or actual unit production. This has been largely unchanged or stable over the past four years. In that sense, the economic performance has mixed results. If both real variables and volumes are rising, there are no problems. But if only the former grew moderately, while the volumes remained stable, we cannot say the Japanese economy is truly strong and growing.”

The increasing quality of household goods sold is a modest boost to the GDP data in 2015 even though the volume of consumer goods sold shows little change. In the past four years, she said, real business investment grew 15% cumulatively while the volume of capital goods and producer goods grew just 3–6% cumulatively.

In exports, too, she explained that there is no rising trend in the volume of exports. Japanese companies have merely boosted the quality of the items they are exporting rather than their number. Dr Shirai appealed for people to consider this fact when thinking about the impact of the yen’s depreciation on exports.

In general terms, in a comparison among Japan, the United States and Europe, the US and Europe are moving ahead economically. In these economies, both real variables and volumes have risen. By contrast, “Japan is far behind despite the Bank of Japan having the biggest degree of monetary easing of the three—measured by the ratio of the asset of each central bank to GDP,” she said.

Dr Shirai assessed that the QQE policy has had some positive impact on Japan’s economy but that income has not been as strong as that anticipated by the BOJ.

“The Japanese economy is neither growing nor deteriorating rapidly; it has simply remained stable these past four years. This is my objective assessment based on facts,” she said. “In terms of overcoming deflation, [BOJ Governor Haruhiko] Kuroda’s monetary easing policy was successful but has not stably achieved the 2% target—it’s not even stably achieving 1% inflation. This may be because economic activities are not as strong as they appear based on real variables. We have to really question Japan’s true economic performance.”

On exploring trends in the banking, corporate and household sectors, Dr Shirai suggested reasons for a lack of “healthy” risk-taking behaviour despite monetary easing.

In the past four years the interest rate has fallen and after reaching a negative interest rate, there was a sharp drop in terms of margin. The value of loans outstanding has grown somewhat but the banking sector’s deposits have grown more. As a result, the loan to deposit ratio dropped further, contrary to the BOJ’s expectation.

The BOJ purchased a lot of JGBs from the banking sector. The banks, after having sold the JGBs to the BOJ, maintained most of the cash at their current BOJ account. The banking sector’s loans or foreign investment did not grow over the past four years. In this sense, the BOJ may feel that banks are not taking risks at all.

But Dr Shirai said that “the abundance of deposits as well as the accumulated current account balance of the BOJ cannot be solved by the monetary policy. Lack of demand for credit is very structural.” And, as the debt security market is largely comprised of JGBs, the BOJ’s substantial intervention also distorted the market so severely that the pricing on the corporate bonds and other bonds has also been distorted.

Thanks to Abenomics, she added, corporate sectors have gained a lot of profit since October 2013. However, most of it is being kept at commercial banks rather than being spent on business fixed development or foreign direct investment. And, in the household sector, too, more and more money is being placed in deposit at commercial banks or being kept in the form of cash. She noted only a slight increase in loans.

“There have been some changes in risk-taking behaviour in these three entities but it was not as big as the government and the BOJ expected, and it was certainly not that big when we think about the scale of monetary easing undertaken by the BOJ,” she said.

Dr Shirai expressed concern about the unsustainable nature of current monetary policy. The corporate sector depends excessively on the exchange rate and stock prices while the Japanese government dominates the bond share. More than 90% of JGBs are owned by a Japanese financial institution, of which about 40% are owned by the BOJ. She explained that “the BOJ really has to make its monetary policy more sustainable and has to do it very carefully and gradually without causing panics in the foreign exchange, stock, and bond markets.

“Since September 2016, the BOJ has shifted from a monetary, volume-based approach to an interest-rate approach. Until then the BOJ had committed to increasing JGB purchases annually to 80 trillion yen but then abandoned the initial target and instead introduced a 10-year target that is 0%,” explained Dr Shirai.

She asked what might be the reason for this shift as well as when the BOJ would normalize its monetary policy if the 2% price stability target is not achievable anytime soon. Its decision might be “to shift market participants’ attention from the amount of JGB purchases to the JGB yield so that the BOJ could tacitly taper the amount of the JGB purchase, which is what the BOJ has been doing since September 2016.

“The 10-year peg at 0% until now can be managed relatively easily since there are downward pressures on the yields due to demand for the JGBs. The BOJ is buying less to raise the yields,” she said.

But, if the BOJ believes it will take many more years to get closer to that 2%, she recommends the BOJ must provide a more sustainable monetary approach, such as raising the 10-year yield target from 0% to 0–0.5% and clear tapering at least toward the net issuance level, which is about 50 trillion yen currently.

A lively question and answer session followed Dr Shirai’s speech, including questions from BCCJ members about the impact of population change, labour shortages and reform.

She pointed out that there is not a clear relationship between ageing society and inflation based on existing empirical studies. Ageing leads to lower inflation because many pensioners oppose inflation and they are major voters at elections, but it also means fewer workers. A shortage of labour eventually leads to higher wages, some of which would be offset by higher productivity. The financial stability of the current and future elderly population was also discussed.

“If people just depend on their pension and bank deposit, which gives around a 0% interest rate, they will not have a comfortable retirement life. We really need diversification of the portfolio and to have people understand that they depend too much on the government,” she said, appealing for people to be more engaged in financial matters.

Greater employment by women and the elderly has had a positive effect on the employment ratio but in three or four years when the latter exceed 70 years of age, Dr Shirai predicts Japan will face a really severe labour shortage unless it uses more foreign labour.

“Japan’s most urgent issue is the labour shortage,” she said, adding that young people as well as women should be given greater opportunities. “It’s good that people can stay at work longer but elderly people tend to take the top positions and be very conservative. At some point they should step down—while continuing to work—to give young people opportunities.”

Summing up, Dr Shirai said that the QQE policy gave breathing space to many organisations in the corporate sector, which was good, but should be reviewed as it is not sustainable.