Written by Sterling Content
March 30, 2016
Past Event Round Ups 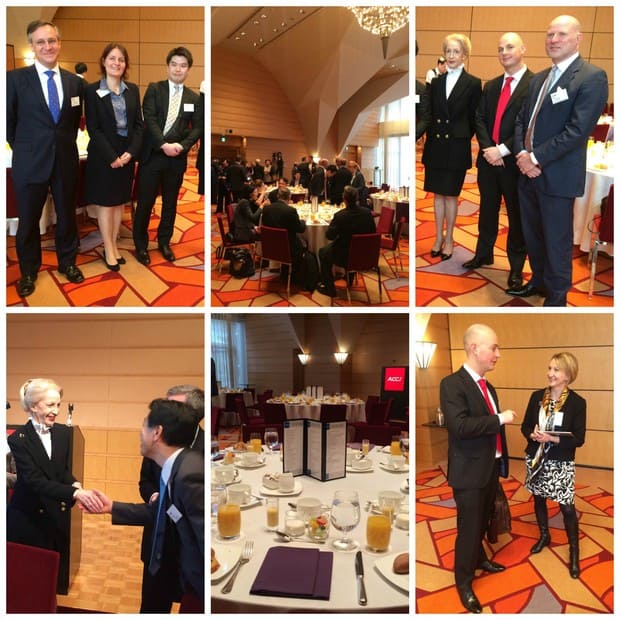 Written by Sterling Content
March 30, 2016
Past Event Round Ups

Lady Judge, a former member of the U.S. Securities and Exchange Commission, chair of the U.K.’s Institute of Directors, and now an independent outside director on the board of LIXIL Group Corporation, opened the session with her definition of corporate governance:

“Corporate governance is how directors govern a corporation for the benefit of shareholders, stakeholders, and the community at large in a transparent and ethical manner”.

“Corporate governance entails balancing the interests of the many stakeholders in a company, and involves a large array of parties, often with conflicting interests. Hence, what constitutes ‘good practice’ in this context is very much a matter of perspective.” Lady Judge then proposed that a country’s culture is highly significant in determining the definition of governance.

Corporate Governance in the US – The Cowboys

The speaker first examined the development of Corporate Governance Code in the United States, highlighting the size of the country, and describing the American corporate psyche as that “of a cowboy”. Comparing the US markets with the Wild West, Lady Judge said, “American corporate governance has evolved from a necessity for rules and laws. If Americans are confronted by a fence or a sheriff, they will stop, but without boundaries, they will simply do what they want”.

As an example of the Wild West US mentality, the speaker gave the example of Franklin Roosevelt appointing Joseph P. Kennedy as the first Chairman of the Securities and Exchange Committee (SEC) in 1934. This was despite the fact that Kennedy, a stock market operator, who some might have described as a manipulator, had made a fortune on Wall Street during the great bull market of the 1920s and got out just in time before the 1929 crash.

Kennedy’s tightening of legislation and regulations was largely successful in reassuring business, simplifying corporate borrowing, and boosting investor confidence, but tricks and stratagems were employed to manipulate the boundaries and “ways were found to climb under the fence past the sheriff.”

As boundaries continue to be tested, said Lady Judge, the US system follows a policy of regulation which tends to rely on the legislation, fines, and imprisonment penalties for violating the requirements of corporate governance legislation.

Corporate Governance in the UK – The Gentlemen

In contrast, the speaker argued, “the UK is a small country of gentlemen who like to be part of the old boys’ network”. “A gentlemans’ club,” Lady Judge argued, “does not advertise its rules – they are unwritten. Members understand the boundaries instinctively and behave accordingly.”

It is for this reason, claimed the speaker, that “the UK Code adopts a principles-based approach in the sense that it provides general guidelines of best practice. This contrasts with the US’ rules-based approach which rigidly defines exact provisions that must be adhered to.”

The publication of the Cadbury Report in 1992 and Higgs Report – responding to the problems thrown up by the collapse of Enron in the US – in 2003, said Lady Judge, cemented this “good behaviour policy” by recommending that the CEO and Chairman of companies be separated; that boards have at least three non-executive directors, two of whom should have no financial or personal ties to executives; and finally that each board has an audit committee composed of non-executive directors.

Rather than stipulating binding laws, the UK “comply or explain” approach has government regulators set out a code, which listed companies may either comply with; if they do not comply, they must explain publicly why this is the case.

Corporate Governance in Japan – The Samurai?

Lady Judge pointed out that for some time Japan has had a reputation among investors for its poor treatment of corporate shareholders. “However, in June 2015 Japan’s Corporate Governance Code entered into force as part of Prime Minister Abe’s drive to improve investor confidence, undo some of the negative sentiment, and to make Japan’s equities market more attractive to foreign capital.”

“This is the first time a Japanese government has laid down detailed rules on how firms should conduct their affairs and has stood up to pressure from the Keidanren (Japan’s business lobby), which did its utmost to have the code watered down”, said Lady Judge. “The code aims to break open the cosy world of the Japanese boardroom by, among other things, requiring firms to appoint at least two outside directors.”

Calling upon the audience to give their thoughts on the relationship between Japanese culture and the role of corporate governance in Japan, the speaker asked whether they believed the notion “that the samurai values of honour, integrity, and loyalty are reflected in Japan’s attitudes to corporate governance”? She also asked if they agree with the sentiment that in Japan “culture eats strategy for breakfast.”

Various opinions were volunteered from the floor. One contributor argued that samurai values and corporate governance are in actual fact contradictory as samurai values are about serving and obeying rather than having personal integrity.

Another contributor argued that the custom of the “overly paternalistic oversight role played by government and corporate management” could indeed have played a part in the motivation for the introduction of Japan’s Corporate Governance Code, and that the social contract in Japanese firms and accompanying argument for Japanese firms to act as a safety net is definitely less potent than it once was.

Finally, it was agreed that when it comes to Corporate Governance, big institutional investors are simply doing the maths. Due to pension problems and negative interest rates, shareholders are becoming more engaged than ever before and recognising that there are too many liabilities and no yield.

Members of the audience conceded, however, that change in corporate Japan, albeit slow, does seem to be underway. It was recognised that there is evidence of increased pressure from institutional investors who are now benchmarking firms by their returns on equity. Companies are also beginning to eliminate unprofitable units. And, as the working-age population is shrinking, an end to the culture of lifetime employment – as well as to the custom of coupling of pay and promotion with age over performance – is now in sight.

Changing corporate cultures is a tough challenge, but not an impossible one. If companies make concerted efforts to introduce these changes from within, relations between firms and their shareholders in Japan stand a better chance of becoming more productive.

Lady Barbara Judge has served as Independent Outside Director of LIXIL Group Corporation since June 2015. She also serves as National Chairman of the UK’s Institute of Directors, and Chairman of the UK’s Pension Protection Fund. In addition, she currently holds a position as a Director of Portmeirion Group PLC, NV Bekaert SA, and Magna International Inc. She served, among her other appointments, as a Non-Executive Director of the UK Atomic Energy Authority from 2002 to 2004, and subsequently as Chairman from 2004 to 2010. She was a Commissioner of the United States Securities
and Exchange Commission from 1980 to 1983. In June 2010, she was awarded Commander of the Order of the British Empire for services to the nuclear and financial services industries.