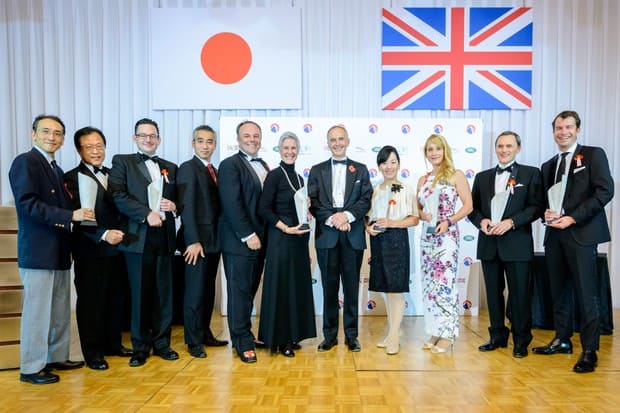 British innovation, entrepreneurship, business success and social contributions in Japan were recognised last night at a gala event at Tokyo’s Hilton Hotel, attended by over 300 guests.

Organised by the British Chamber of Commerce in Japan (BCCJ), with winners chosen by a panel of five independent judges with backgrounds spanning trade, sport, law, government and engineering, the British Business Awards (BBA) has become one of the largest annual events enjoyed by the foreign business community in Japan and a unique showcase for British creativity, culture and commerce.

For the ninth consecutive year, the event was supported by an impressive range of BCCJ member companies and friends, with Jaguar Land Rover Japan once again contributing as the headline sponsor.

British saxofonist, Marcus Pittman, and the rock band The Mayflowers delivered the best of British entertainment with popular hits from The Beatles and other British artists.

The Ambassador said: “It is once again a great pleasure to be here to present trophies to the deserving winners of the British Business Awards in recognition of their success in the Japan market. And all 28 nominees are to be praised and celebrated”.

The Person of the Year winner was chosen through an online vote by BCCJ members.

BCCJ President David Bickle said: “The BCCJ applauds all nominees and congratulates the winners on their remarkable achievements. Competition for all awards was intense, reflecting the high quality of the nominees and vibrancy of the British-Japan business relationship.”

Winner of Company of the Year award, Philippe Fauchet OBE, President, GlaxoSmithKline K.K  said he was “delighted to accept the award” on behalf of all his staff.

“We are very honored to be awarded “Company of the Year” at the 2016 British Business Awards and we thank the judges for having recognized us among many other good candidates with a very valuable dossier. We have strived to make industry leading changes to modernise our business and ensure our long-term sustainability in alignment with our four values, and with specific attention to “patient focus”. This recognition of British business excellence reflects the dedication and commitment of GSK Japan employees to improve the way we do business, contributing to medical science and information in Japan as well as to our community and people in need through our CSR activities under our “Orange banner”.  We will continue to “do more” to serve the people living in Japan so that they feel better and live longer.”

Matt Burney, Director of the British Council, who together with Masaru Yamada, Chairman of Japan Association of Overseas Studies (JAOS) won the UK-Japan Partnership trophy said, “The exchange of friendly knowledge and understanding between young people in both the UK and Japan is more important than ever. Working with organisations such as JAOS enables us to create more educational opportunities for young people in both countries to help them realise their potential and be the best they can be. I firmly believe that it is the cultural and education relationships that exist between the UK and Japan that provide a strong foundation for the trade, commerce, political and other relationships to thrive.”

The ninth BBA, held at the Hilton Hotel Tokyo, attracted 28 nominations for the six awards. Nominees came from global corporations, SMEs, not-for-profit organisations, and entrepreneurs across a number of traditional and modern industries, as well as from the public sector. The BCCJ welcomed almost 300 guests – the largest event in the not-for-profit organisation’s year.

Company of the Year: GlaxoSmithKline K.K.
For helping people to do more, feel better, and live longer; for widening access to GSK products, no matter where a person lives or what they can afford to pay; and for raising awareness of this commitment as a visible contributor to Japanese society.

Entrepreneur of the Year: Tamao Sako (The British Pudding)
For her success as a Japanese expert on British baking and cuisine; her popular classes, blogs, TV show, and UK tours; and for receiving this year’s Gourmand World Cookbook Grand Prix prize for her British cook book.

UK-Japan Partnership: Japan Association of Overseas Studies & British Council
For launching the ‘Summer Study in the UK Programme’ for Japanese Senior High School Students in 2016 to forge new links between Japanese agents and UK English language schools with a view to growing the market and helping young people realise their potential through education opportunities.

Community Contribution: Klein Dytham architecture
For generating positive change in communities by building temporary housing areas in Tohoku and Kumamoto; for the revitalization of the T-SITE complex in Daikanyama and the creation of new spaces in Ginza Place; and for building communities in over 900 cities worldwide with the creative platform ‘PechaKucha Night’.

Innovation: Astra Zeneca K.K.
For their commitment to Japan, illustrated by the successful launch of the innovative anti-cancer drug TAGRISSO®; and for initiatives to expand and expedite access to treatments for Japanese lung cancer patients.

Person of the Year: Jacky Scanlan Dyas (Partner, Hogan Lovells)
For her dedication to preserving the strength of the UK Japanese commercial relationship post Brexit by helping Japanese businesses analyse its impact as well as leading community pro-bono and gender equality projects.

Sincere thanks to the 2016 BBA sponsors, without whom the BCCJ’s annual, black-tie event would not be possible:

AstraZeneca Japan (AZKK) has made British Business Awards history by scooping the Company of the Yea ...

A collaboration between The Alan Turing Institute (the Turing), the UK’s national institute for da ...

COVID-19 has made 2020 challenging for many but for those already struggling financially or socially ...