Written by BCCJ
September 16, 2016
Past Event Round Ups 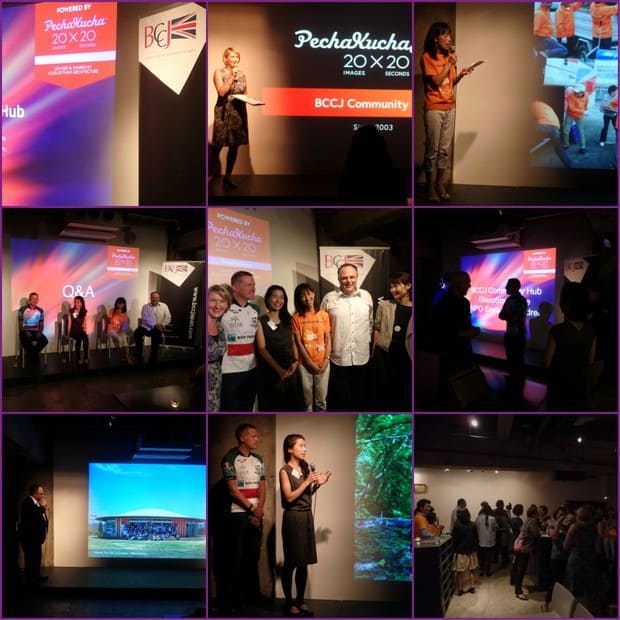 Written by BCCJ
September 16, 2016
Past Event Round Ups

The event was held in the avant-garde rooms of the SuperDeluxe club, owned by BCCJ Entrepreneur member Mark Dytham of Klein Dytham Architecture, where guests enjoyed the opportunity to socialise and network before listening to the inspiring community case-studies presented by member companies and not-for-profit organisations.

In addition to the BCCJ’s own community programme, Books For Smiles, the Chamber strives to support a number of NPOs across Japan – including local organisations and volunteer groups.

At this year’s event, it was a pleasure to hand the microphone to member companies who are creating and delivering successful CSR programmes:

1) GlaxoSmithKline Employee Volunteering and Save the Children

Yukimi Ito, Head of Communications at GSK Japan, illustrated with her presentation the power of employee volunteering and the positive impact employees can have on their local communities. Ito encouraged other companies to introduce programmes such as GSK’s ‘Orange Day’, whereby all employees are given one paid day off each year to volunteer for a good cause.

The speaker also highlighted the success of the PULSE Volunteer Partnership, a skills-based volunteering initiative which matches employees to a non-profit organisation for three or six months full-time, to which they contribute their skills to solve healthcare challenges at home and abroad. “Since its launch in 2009, PULSE has sent nearly 500 employees from 51 countries to serve 92 non-profit partners in 61 countries, supporting partners that work on healthcare access and issues affecting children – this equates to £12.6 million worth of skilled services,” said Ito.

Concluding her presentation, Ito spoke about GSK’s Save the Children partnership, which goes well beyond the traditional charity corporate fundraising model. “We are combining our capabilities in R&D, supply chain, procurement and vaccines with Save the Children’s expertise working with the most vulnerable children.”

2) Knights in White Lycra and Mirai no Mori

Co-Founder of the charity Knights in White Lycra (KIWL), Rob Williams, opened his presentation with a short history of his organisation. KIWL, he said, was formed in 2012 by a group of ten British men who bought bikes and rode 300kms to Minamisoma to raise ¥2.7 million for the Save Minamisoma Project. Since then, the Tokyo-based charity cycling team, now made up of around forty male & female expatriates and Japanese, have continued to raise funds and awareness for diverse community projects in Japan. KIWL is sponsored by various companies as well as individual donors.

“In its short 4-year history, KIWL has raised ¥25.2 million (approx GBP194,000) which has helped to change the lives of many children,” said Willliams.KIWL is currently supporting the charity Mirai no Mori, a Japan-based NPO providing life changing outdoor programs for neglected, abused and orphaned children in care homes throughout Japan.

Kozue Oka, who runs the Mirai no Mori charity, continued the presentation, and talked to the audience about the summer camps, and day and weekend trips sponsored by companies, “which help fragile children overcome fears, breed self-confidence and trust, and equip them with life skills to give them a better chance in adult life.” Oka emphasised that these are not ”Disney for the Day” experiences, but sustainable long-term self-development programs.

Both Williams and Oka called upon the audience to join their upcoming fundraising events including their 500km ride from Tokyo to Ichinoseki (Iwate) from May 26th to May 29th, their relay ride around the Imperial Palace from October 28th to 29th, or to donate.

3) Klein Dytham Architecture and Homes For All

Mark Dytham, architect and co-founder of PechaKucha, illustrated with his presentation how, together with Toyo Ito Architects, Home-For-All, Arup Japan and Shelter, his company succeeded in designing and building 14 award-winning temporary housing units for communities living outside the exclusion zones in Tohoku.

“The project was funded by donations made through T-Point Japan, generous individual donations, product and material donations – and all professional work was undertaken pro-bono. Amazing team work for a great cause makes everything possible,” said Dytham.

The speaker explained how the architects and construction companies had worked together to create an environment for families and their children that would bring back a sense of pride to the community and provide a space where people could meet, share stories, and where the children could play together safely.

Dytham also praised the work of Photohoku, a family photo and family photo album building project for those in need, which was started in response to the March 11, 2011 Great Tohoku Earthquake and Tsunami disaster in Japan.

The founders, Brian Scott Peterson and Yuko Yoshikawa took photographs of the survivors with instant film so the affected families could start making new family albums. They then distributed donated digital cameras to allow the families to continue taking photographs long after the Photohoku volunteers had left.

Both Peterson and Yoshikawa were present at the Community Hub event to take photos of BCCJ members and guests, and to illustrate their work.

Klein Dytham Homes for All
Photohoku

The enthusiasm and commitment shown by these companies and organisations proved an inspiration for BCCJ member companies interested in driving responsible business and supporting good causes.

The evening saw bridges built between organisation representatives and BCCJ member firms, and paths forged for a better understanding of the ways in which businesses can become more responsible by supporting local NPOs and volunteer groups.

“Powered by PechaKucha” events are one-off events that are separate from regular city-based PechaKucha Nights, and are usually held  as part of festivals and conferences, but can also act as standalone events. These events include presentations that use the PechaKucha  20 images x 20 seconds format. Find out more at PechaKucha.org

See photos from the evening on the BCCJ’s Flickr page