Written by BCCJ
May 13, 2013
Community and Business 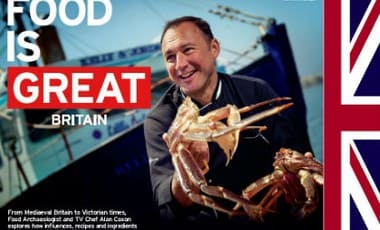 Written by BCCJ
May 13, 2013
Community and Business

Award-winning chef Alan Coxon has been announced as an ambassador for the UK government’s Britain is GREAT campaign.

Alan will be helping to promote and expose British food and drink around the world, with the aim of increasing awareness and generating export opportunities.

His involvement was announced after a meeting at 10 Downing Street.

Alan, who has appeared on TV for more than 15 years and has worked in Michelin star restaurants, said: “I am honoured and extremely proud to be a part of the GREAT Britain campaign and I hope that my involvement will make an impact and a difference for the British food, beverage and tourism industries.

“Wherever I go around the world I love to extoll the virtues of our GREAT British culinary heritage; where every ingredient has a place of birth and every recipe a creator. We have a fantastic menu of dishes that have travelled the globe and evolved through the centuries that remain truly GREAT today.”