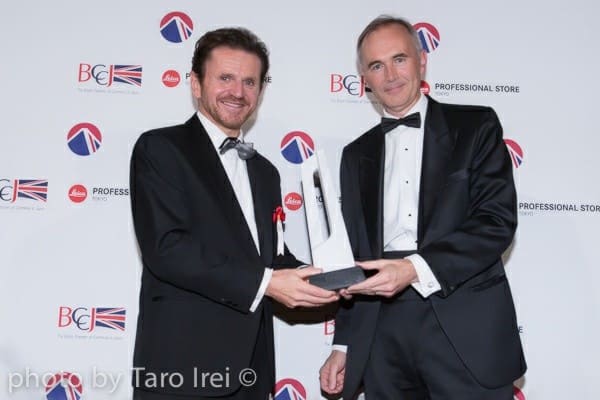 This year’s British Business Awards, hosted by The British Chamber of Commerce (BCCJ), saw a multitude of talent receiving awards for their contribution to Anglo-Japanese business relations. BLJ is delighted to announce that founder and CEO Steve Crane was one of the recipients of such commendation: winning the Entrepreneur of the Year Award.

Following Steve’s win in 2011 of the BBA’s Person of the Year, this second award celebrates his innovative business approach and BLJ’s development of a low-cost, low-risk business model that facilitates the successful introduction and expansion of international companies within Japan.

This accolade is not only a recognition of BLJ’s work with over 60 private and public sector organisations, but also acknowledges their role as strategic partner in online trade portal ‘Export to Japan’: a not-for-profit partnership which promotes the development of UK companies into Japan.

On accepting the award from British Ambassador Tim Hitchens CMG LVO, Steve commented: ‘I’m delighted and honoured to have won Entrepreneur of the Year. I would like to thank the BCCJ, BBA Judges, my fellow nominees and all of the clients we have had the pleasure of working with. I would also like to thank my dedicated team at BLJ, without whom we could not deliver the cutting-edge, professional and culturally sensitive services that we pride ourselves on.’