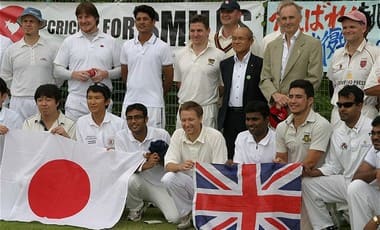 On Saturday 7 September, the BCCJ was very pleased to collaborate on a cricket match organised by The British Embassy Tokyo and the Japan Cricket Association (JCA) in support of local communities in Fukushima, Tohoku.

“The match was played on a baseball pitch on the town of Minamisoma, part of which falls within the 17-mile no-go zone around the crippled plant, against an international team drawn from players across the Tohoku region . . . Tests carried out on the grass pitch before the game showed that the radiation level was 0.6 microsieverts per hour, similar to naturally occurring radiation in places such as Aberdeen and Cornwall”.

“The reason we wanted to come is because the people in places like this are being forgotten,” said the Ambassador. “Obviously there is a question of safety, but the British government has from the start been led by the science in its response to the situation at Fukushima”.

The cricket match took place just hours before Tokyo was chosen over Madrid and Istanbul to host the 2020 Olympic and Paralympic Games.