Brexit: Risks and Opportunities for the UK and Japan 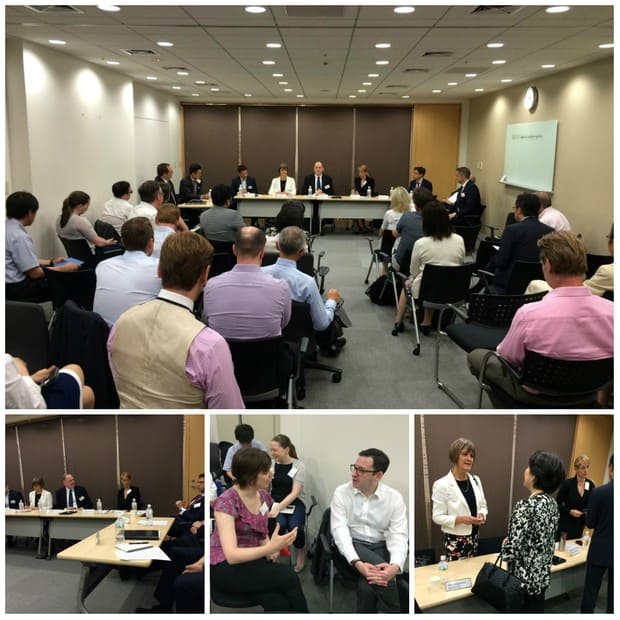 On June 24 at 06:00BST (14:00JST) it was confirmed that the UK had voted to leave the European Union. The exact process for the UK’s withdrawal is uncertain, although it is generally expected to take two years following the activation of Article 50 of the Lisbon Treaty.

In response to the result of the historic referendum, BCCJ members and guests gathered at Ark Hills Regus Business Centre on 8 July 2016 to hear from a cross-section of BCCJ Corporate Plus member firms, discussing short-term risks and long-term opportunities associated with the British public’s decision.

Firstly, BCCJ President, David Bickle (Deloitte), welcomed an panel of speakers selected for their expertise to give insights on the political, financial, and legal implications of Brexit for UK and and Japanese business:

The round-table began with an overview of the reasons for the referendum, followed by analysis of the motivations for the UK’s voting to leave Europe.

“If the Prime Minister hadn’t held the referendum, the UK would still eventually have found itself in the same situation, but it would have been messier. The question simply had to be settled. It was indeed a massive democratic exercise.”

“The benefits of Europe were very little discussed and the public were not fully informed. The British people saw the European Union as the reason for things going wrong in their nation, and the benefits of membership, such as peace and security, got lost in the debate.”

“There were two groups who voted to leave; firstly those with concerns about increasing levels of immigration, and secondly those who truly believe that the UK as the fifth largest economy in the world and a strong de-regulator, will be a more effective leader when not bound by the regulations of the EU. The UK government will now work hard to make it a success.”

“The certainties are that Britain will have a female prime minister, that the UK will continue its good relations with Europe, and that Japan will remain a key partner for Britain.”

Simon Mather from Deloitte Touche Tohmatsu pointed to a disconnect between the political class and the voters. “From an socio-political perspective, UK voters didn’t feel a sense of identity with the EU.” Mather was confident however that politics will quickly realign and that the situation will cool down: “The UK is good at muddling through and finding a compromise.”

Reflecting upon the reactions of Japanese businesses to the news, Peter Godwin of Herbert Smith said, “After some initial panic, many Japanese clients could be wondering whether the UK is the right place to be”. Godwin recommended a continued and open dialogue with Japanese clients and to ask them to reflect upon the reasons why they chose the UK as an investment destination in the first place.

EY’s Jo Stobbs addressed concerns expressed about the increased costs for Japanese businesses in the UK, but emphasised that the UK has one of the best tax treaty networks in the world. “The key potential cost, in terms of trade of goods, is how successfully the UK can negotiate for tariff-free access to the customs union, which is as yet unclear. The most pragmatic approach to analyzing costs is to assume a WTO position for at least 2-3 years following Brexit.”

Neil Slater from Standard Life Investments admitted that the financial industry is concerned: “Uncertainty is the worst. Volatility is impacting asset prices and affecting recruitment, offices, and European business. Long-term investors are understandably asking what the rationale is for investing in the UK.”

Leng Fong Lai from Clifford Chance highlighted the challenges now facing international institutions who have chosen to do business in the UK, not only due to excellent infrastructure, but because “being in the UK gives you license to do business in the EU”. Leaving the EU, said Lai, means “losing synergies as well as access to the EU, and having to relinquish cross-border passport status.”

Fong explained that this loss of status will not affect international banks with a London branch,”but for the mega banks with UK-licensed subsidiaries, there is great uncertainty. These banks would either have to set up a new subsidiary in another EU member state (such as Dublin) or under the new Markets & Financial Instruments Incentive. However, this Incentive would only be valid for as long as EU legislation recognises it.”

Edward Cole from Freshfields talked about the Brexit process is a spectrum of potential scenarios for moving ahead from a basic World Trade Organisation based arrangement at one end to a Norwegian-style participation in the European Economic Area as a member of the European Free Trade Association (EFTA) at the other. Other options include membership of EFTA supplemented with a series of bilateral agreements concerning market access in specific sectors similar to Switzerland or an arrangement similar to that between Turkey and the EU where there is basic customs union only.

“The core point,” said Cole is “will there be a pragmatic solution that gives substantial access to the single market while dealing with the freedom of movement concerns?” It is difficult to tell, he said, but looking at the history of the EU, there have been plenty of examples in the past of pragmatic solutions being found when they are needed.”

Jacky Scanlan-Dyas, partner at Hogan Lovells, said that corporate investors with long-term stakes in the UK and the rest of Europe have a lot on their minds.

“Clients have expressed concern about Article 50 and want to know more about the process. Japanese businesses are unhappy about the uncertainty impacting their existing European and UK businesses and want to know how Brexit will affect them. They are nervous about acquisitions and new investment going into the UK. Many questions have been asked about what the EU-UK trading arrangements will look like, and whether the UK will have access to the single market.”

Scanlan-Dyas reminded the audience that Japan is one of the two biggest investors into the UK, and that Japanese corporate views are very important to UK policymakers who want to understand their priorities, so these can be taken into account in the negotiations going forward.

Interestingly, the speaker added, “On M&A, the view of my colleagues in Shanghai is a little different to the view I’m hearing in Japan. Our Japanese clients typically invest for long-term relationships, not short-term profits so many of them are naturally concerned about proceeding with new investments into the UK in the current market. The view in China is not necessarily the same. And I understand some Chinese companies are currently actively seeking investment opportunities in the UK.”

In the subsequent Q&A session, a variety of issues were discussed, including: the prospects for the pound, the possibility of a second EU referendum, the content of negotiations between the UK and the EU, and how to heal the divisions in society.

It was agreed that the most important steps to be taken post-Brexit are: to collect information in order to assess the key priorities, to secure a functioning UK political system, to create a roadmap to deflect the uncertainty and to provide more clarity, to fight discrimination and preserve the cultural connections between the UK and the EU, and to let the dust settle.

In conclusion, the panel emphasised the advantages for Japanese companies doing business in the UK including a high-quality business culture, transactions conducted in English, good schools for expats, and high standards of corporate governance. BCCJ President Bickle reminded the audience that change always creates opportunity, but that for the time being, patience will be required.