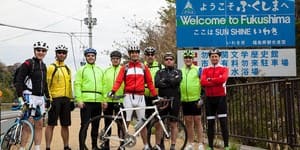 BCCJ members will ride 465km to raise money for a Tohoku charity.

The Knights in White Lycra, which includes BCCJ members, will cycle from Tokyo to Minamisanriku in three days.

They are raising money for OGA’s Green Farmers Association, an NPO which is working to rebuild the agricultural industry in Minamisanriku, and which was supported by the BCCJ’s B2B initiative in 2011.

The group have been training along the Arakawa and Tamagawa rivers in preparation for the epic ride.

The cyclists will set off tomorrow (May 15th).

For more information and to donate visit the OGA website.