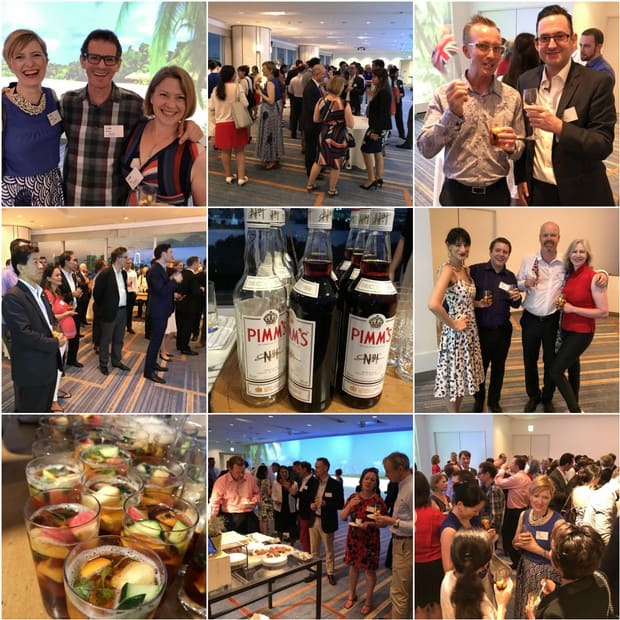 On the evening of 6 July 2017, almost 100 guests gathered at the Hilton Odaiba at “Pimm’s o’clock” to attend the BCCJ’s annual summer social event, ‘The Great British Pimm’s Party’.

The Pimm’s bar – generously sponsored by BCCJ Corporate Plus member Diageo – was a great hit, with many members trying the traditional British summer cocktail for the first time and gaining a few new insights into British summer drinking culture:

Pimm’s Facts: Did you know?

– Pimm’s is a brand of fruit cups, but may also be considered a liqueur. It was first produced in 1823 by James Pimm and has been owned by Diageo since 1997.

– As a summer long drink, it is also commonly served with “English-style” (clear and carbonated) lemonade, as well as various chopped garnishes, particularly apples, cucumber, oranges, lemons, strawberry, and mint or borage, though nowadays most substitute mint.

– Pimm’s is most popular in England, particularly southern England. It is one of the two staple drinks at the Wimbledon tennis tournament, the Chelsea Flower Show, the Henley Royal Regatta and the Glyndebourne Festival Opera – the other being Champagne.

Happy door prize winners went home with some choice British Bubbly courtesy of Bolney and Digby winemakers as well as a voucher for lunch at the Hilton Odaiba generously donated by the hotel.

This lively event was made possible with the support of the Hilton Odaiba‘s Director of Business Development, Peta Ruiter, and her talented team.

Photos of the event are available on BCCJ Flickr HERE