A Night of Intercultural Street Rugby 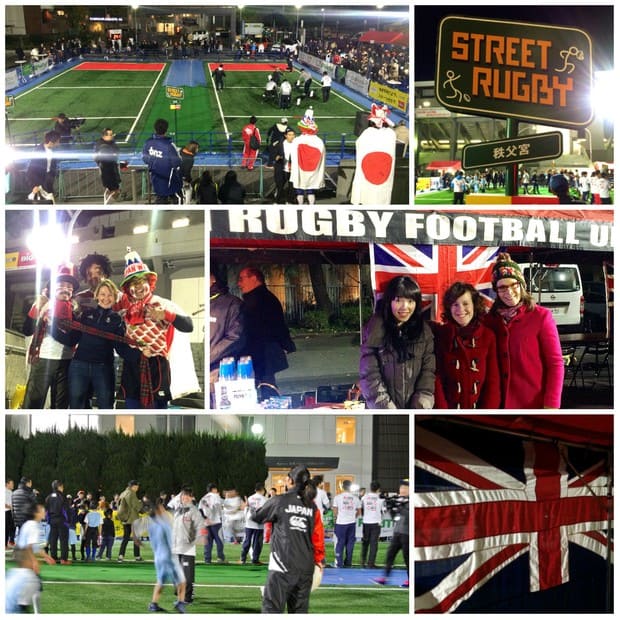 At “Night Street Rugby” on the evening of December 8, over 500 visitors and 150 players from around ten different countries participated in the intercultural sports event, with international food and drink stalls set up around the pitch. Organisers and players were honoured to welcome members of the Japan women’s national rugby team who kicked off the event with a motivational speech before joining the fun and games. Kinohachi played moving shakuhachi music for the opening ceremony, and all participants joined Atsuko Watase at the end of the event to sing the rousing rugby theme song.

Street Rugby is typically played in public streets, making the sport more accessible to players and spectators. It is easy to play and has just three players per team. At this event, the diverse teams competed with energy and tremendous sporting spirit on street rugby pitches set up in front of the famous Chichibunomiya Rugby Stadium. Thankfully on this particular occasion, the Mayor of London, Boris Johnson, was not present to flatten any 10-year olds …

Visitors warmed themselves with Australian BBQ, wine, hot pies, and pasties. Craft beer and whisky from Scotland helped take the chill off the night as specators huddled around the pitch, cheerfully supporting their teams. A strong sense of community and a passion for the sport of rugby was shared by players and visitors alike with laughter, conversation, and cheers filling the night.

The BCCJ team ran a “UK booth”, supported by Brewdog, GSK Japan and Robert Walters Japan. The booth provided information about upcoming global sporting events – 2019 Rugby World Cup, and 2020 Olympics and Paralympics – and shared British expertise and souveniers. The latter were a great hit with the many children excitedly running between the stalls and the games, while enjoying practicing their English!

The BCCJ was very pleased to support this event, organised by NeuroSky Japan Inc. & The Rugby Alliance, to celebrate Tokyo’s staging of the 2019 Rugby World Cup and the 2020 Olympics & Paralympics, and promote grass-roots community-building through sports.

Thanks to BCCJ members BrewDog Japan, Robert Walters and GSK for their support and participation, and to Hiroaki Koyama from NeuroSky Japan Inc. for organising such a successful evening.