A Discussion on North Korea at the BCCJ 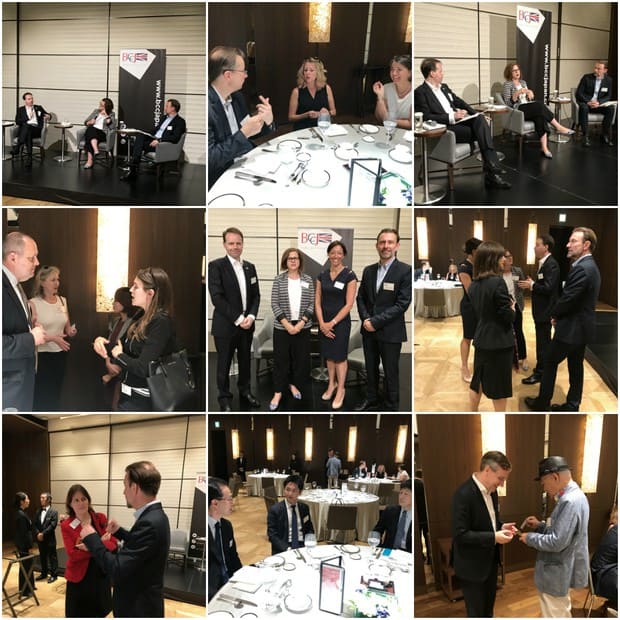 On 15 June 2017, BCCJ members and guests met for lunch at the Grand Hyatt Tokyo for an eye-opening panel discussion on North Korea with Dr. David Ellis, Deputy Head of Mission at the British Embassy; Anna Fifield, Tokyo Bureau Chief for The Washington Post; and Rupert Wingfield-Hayes, BBC Tokyo correspondent.

Dr Ellis took on the role of Minister and Deputy Head of Mission at the British Embassy in Tokyo on 1 August 2016. He is responsible for advancing UK-Japan relations on political and security issues. He also oversees the consular and visa operations as well the Embassy’s corporate operations.

Fifield started as a journalist in her home country of New Zealand, and then worked for the Financial Times for 13 years. During her time at the FT, Fifield reported from almost 20 countries, from Iran and Libya to North Korea and Australia. During the 2013-14 academic year, she was a Nieman journalism fellow at Harvard, studying how change happens in closed societies. Fifield has been Tokyo Bureau Chief since June 2014.

Wingfield-Hayes, who has worked for the BBC since 1999 has been based in the Tokyo bureau since 2012, reporting across the BBC’s news services, including the BBC’s international news channel, BBC World News, in addition to news services within the UK. He has also covered Beijing, Moscow and the Middle East.

For decades, North Korea has been one of the world’s most secretive societies.

It is one of the few countries still under nominally communist, totalitarian rule. Kim Jong-un, known as “The Great Successor”, took power in 2011 upon the death of his father, Kim Jong-il. Since Kim Jong-Un’s succession, the country has ramped up its efforts to build a long-range nuclear missile capable of hitting targets globally. In May 2017, North Korea claimed the US mainland was now within range of its missiles after it successfully test-fired a new rocket it said was capable of carrying a “large-scale, heavy nuclear warhead”.

The first topic to be discussed by the panel was North Korea’s ambitions – a topic, it was conceded, few know much about. Ellis opened the debate, explaining that there are different theories on North Korea’s intentions including the “Nothing to Fear” stance, the “North Korea is Misunderstood” position, the idea that NK may agree to denuclearisation upon improved relations with West, and the possibility of a re-union with South Korea.

Ellis argued that although we see more activity in terms of missiles and nuclear development in North Korea, what has changed is not North Korea’s doctrine, but their capabilities. “North Korea wants a unified peninsula, but the reasons behind the strategic missile programme are still regime survival and the belief that North Korea is the centre of the world,” he said.

Fifield, moderating the discussion, added, “It’s also about Kim family power. There has been a change in position, namely that North Korea is showing no willingness to use weapons as a bargaining tool. North Korea has observed from countries such as Syria and Iran that compromise doesn’t necessarily have a happy ending, and is therefore unlikely to give up its strategic nuclear missiles programme.”

The next question raised referred to the role of China’s position to North Korea. The panel examined the current relationship between China, the US, South and North Korea:

In response to North Korea conducting two rounds of ballistic missile tests in stark violation of UN Security Council resolutions, the United States, South Korea, and Japan all vowed to tighten military ties and step up pressure on Pyongyang. This was underscored by the partial installation of the US missile defense system, THAAD, in South Korea.

Seoul and Washington assured that the system was directly to guard against the North’s provocations, but Beijing was affronted by the presence of such a missile system so close to its own territory, did not want South Korea to further its military relationship with the US, and was against American troops stationed in South Korea being able to move up to the peninsula’s border with China. For these reasons, China suggested a “double freeze”, proposing that North Korea freeze nuclear and missile programs in exchange for a halt to major military exercises by American and South Korean forces. This deal was rejected.

Wingfield-Hayes referred to the Chinese proverb, “as close as lips and teeth” to describe the relationship between China and North Korea.

All three panelists agreed that Beijing doesn’t want the collapse of its nuclear-armed neighbour, and that China has a permanent interest in keeping North Korea afloat. Fifield said, “despite claims of a ‘special relationship’ between Trump and Xi, the prospects of China supporting the US are low. China wants stability.”

Ellis highlighted that China may have introduced sanctions, but that under Kim Jong Un, North Korea has seen the rise of a merchant class and a vibrant black market. “North Korea has been experiencing economic success in recent years by taking steps toward allowing private enterprise to spread throughout the country with entrepreneurs looking to gain a foothold in an increasingly open market.”

“The dire economic conditions of the 90s, when the famine killed more than 2 million people, are changing and are an indicator that international sanctions would likely have be far harsher to have the desired effect of convincing Kim Jong Un that it’s not worth it for him to continue to pursue a nuclear weapons programme.”

Additionally, as about 80 percent of the consumer goods in North Korean markets come from China, North Korea is a strategic asset, making China very reluctant change the situation.

In reference to Russia’s role, Fifield emphasised that while China might be willing to make a few sacrifices for North Korea, Russia is much more profit-orientated and would probably only play along if money was to be made.

It was also mentioned that the Trump administration has demonstrated no active measures to cause regime change.

Next, the panel looked at the relationship between North Korea and Japan.

The panelists examined the situation by looking at Prime Minister Abe’s ambitions to revise the Japanese consititution to allow the right to self-defence in what he describes as a “deteriorating security situation”. Wingfield-Hayes emphasised that “while Prime Minister Abe is of course not encouraging North Korea’s provocations, the situation does allow him to pursue his agenda of reviewing and renewing Article 9.”

The panelist also highlighted the results of recent opinion polls which show movement in South Korea for support for a nuclear weapons programme: “This development could also be used by Abe supporters to their advantage in arguing for constitutional change.”

Ellis added that Japan’s awareness that its influence is falling behind China, has fuelled Abe to become bolder, and that the Prime Minister could use threats from North Korea and China to galvanise support for a revision.

Wingfield-Hayes pointed out that while previous calls to revise Article 9 have been met with scepticism in Japan and in countries including China and South Korea that object to any signs of Japan’s remilitarisation, the younger generations in Japan are showing a shift in opinion with a more nationalistic stance than their parents’ generation.

In the subsequent Q&A session, the audience asked Wingfield-Hayes to elaborate on his personal experience in May 2016 in Pyongyang of being held incommunicado for 10 hours and interrogated due to officials believing he had been disrespectful in his description of Kim Jong Un, and subsequently being deported and forced to apologise for his reporting.

“I wouldn’t wish the experience on anyone,” said Wingfield-Hayes. “With my detainment came the realisation that much of the North Korean population truly believe the facistic, mythical cult that surrounds the Supreme Leader and that it permeates every aspect of North Korean life. It is at the heart of North Korean society.”

Wingfield-Hayes explained that his interrogators had had former articles of his interpreted and completely misunderstood certain expressions. For instance, he had described a customs officer as “grim-faced” and written that he had “barked” orders. The North Korean interrogators mistook “grim-faced” to mean “ugly”, and the use of the word “barks” as an indication that the officers sounded like dogs. “They began going through my articles word by word – finding offence in almost every one. But the words were not important; they were ammunition to throw at me, to force me to confess.”

Reflecting on the country’s investments, the panel highlighted that for such a small country, North Korea invested disproportionately large sums into the education of science and technology and that the resources, channelled into the nuclear programme were extensive. “An estimated 50% of government revenues go into this programme, but can this be maintained?” asked Wingfield-Hayes.

In conclusion, answering a question on the likelihood of North Korea employing their nuclear weapons, all three panelists agreed that they could not envisage such a scenario unless North Korea were on the brink of collapse. Wingfield-Hayes said he believed that unprovoked, North Korea would not take action, “but if attacked, I believe their threshold would be low.”

Ellis concluded by saying that there has always been aggressive rhetoric from North Korea, but more worrying is “our lack of knowledge about their nuclear doctrine. We have no information about how it is managed or how they control their launch codes. This is our greatest concern.”