Written by BCCJ
April 7, 2016
Community and Business, Past Event Round Ups Written by BCCJ
April 7, 2016
Community and Business, Past Event Round Ups

Over lunch at a joint BCCJ-EU Chambers of Commerce event on March 29, the head of the world’s largest city, Tokyo Governor Masuzoe, shared his ambitions for making Tokyo a vibrant business and investment hub on the road to 2020 and beyond. This session was made possible thanks to the kind support of the European Business Council (EBC) in Japan and Philips Japan.

“There has never been a better time to invest in Tokyo”, said Governor Masuzoe energetically as he opened his speech to a fully booked room of EU-chamber members, guests, and press.

“In  our 10-year vision to transform Tokyo into a leading financial center and investment hub, we are committed to making this city an even easier place for international enterprises to thrive. The city has just approved a 13.7 trillion yen (121 billion USD) budget for the year starting April 1, featuring exciting new initiatives to realize our vision and deliver the “best ever” Olympic and Paralympic Games in 2020” said the Governor.

The speaker first addressed the marketing measures currently being undertaken by the Tokyo government to position the city as a top tourist destination.

In 2015, a record-high number of 19.7 million international tourists visited Japan and Masuzoe would like to see similar increases in Tokyo. “We have set ourselves a target of attracting 15 million visitors by 2020” he said.

Various measures are already being rolled out to raise the profile of Tokyo as the world’s most hospitable city including the &Tokyo campaign, a new multi-language call center service to support retailers participating in the Japan tax-free shopping program, and a free WIFI service for tourist hot-spots.

“In addition to recreational visitors,” said the Governor “we are taking a more strategic approach to attract international MICE events to Tokyo. One industry we are specifically targeting is financial services, with a new International Finance Forum set for later this year.”

Governor Masuzoe then continued to talk about the opportunities being made availbale to new market entrants in Tokyo.

“For foreign start-ups, one of the key benefits of Tokyo’s National Strategic Special Zone status is our One-Stop Business Establishment Center in Akasaka. The center offers free bilingual advice to international entrepreneurs, and integrates eight separate procedures to cut the time it takes to establish a business in Tokyo from twenty days to four, on par with Singapore.”

Governor Masuzoe also highlighted the support offered to businesses outside Japan. “The Tokyo Metropolitan Government is working with JETRO to host Invest Tokyo Seminars and last July, we partnered with the UK’s Department of Trade & Industry to host such a seminar in London.”

Addressing opportunities for established international businesses in Tokyo, Governor Masuzoe highlighted the three sectors of healthcare, IT & electronics, and environmental businesses including smart and green energy.

“In healthcare, we are driving ahead with our goal of transforming Tokyo into an international life sciences business hub. As part of this drive, we plan to establish a new match-making center in the Nihonbashi area to connect manufacturing SMEs with medical equipment firms.”

The speaker then announced the steps that are being taken to make Tokyo a “Smart Energy City.” including the Tokyo Cap-and-Trade Program which aims to support large corporations reduce green-house gas emissions and a committment to raising the percentage of energy generated from renewable sources to 30% by 2030.

Through the launch of a number of public-private investment funds, the city is also showing its commitment to encouraging private capital investment from home and abroad. Although Tokyo has only invested 4.2 billion yen (36.9 million USD), this has set the stage for the growth of six energy funds worth over 40 billion yen (351 million USD).

Of great importance to Tokyo is the education of the next generation of financial professionals, said the speaker. For this reason, the city is launching a new financial studies program at the Tokyo Metropolitan University Business School this April 2016.

Governor Masuzoe also recognised the challenges faced by international firms in Tokyo and expressed his commitment to devoting more resources to supporting young people to develop the language skills and international mindset to effectively compete in the global workforce. “English language projects will be expanded and more resources made available to students wishing to study overseas.”

With regards to the efforts being made by the Tokyo Metropolitan Government to remove constraints faced by working parents, the audience responded with loud applause to the Governor’s announcement that “over the next four years, we aim to increase the number of daycare slots to 40,000. And change begins at home – this October, the Tokyo Metropolitan government is excited to open a nursery school inside City Hall not only for our staff but also local working parents.”

Indeed, these efforts seem to be paying off. The Financial Times’ Asia-Pacific fDi report ranked Tokyo top in the megacities category and 2nd overall in the Asia-Pacific Cities of the Future 2015/16 survey.

Governor Masuzoe made it clear that one of the key goals for the Tokyo 2020 Olympic and Paralympic Games “is to host a truly “barrier-free” Games”. The speaker announced the commitment of the city of Tokyo to realise initiatives to make public streets around Olympic venues more wheelchair-friendly, and to provide more tactile paving for the visually impaired, universal design taxis and tour buses with wheelchairs lifts.

“Ahead of the Paralympics, we have set up a new 20 billion yen (176 million USD) fund to cultivate talented athletes regardless of physical or mental challenges. For me, shining a stronger spotlight on the Paralympics will be a key measure of success for the 2020 Games.”

Learning from the infrastructure legacy of London 2012, Governor Masuzoe announced that the Tokyo government is creating a detailed plan to outline how each venue will be used after the Games. “First, we will use the world-class sporting facilities built for the Games to nurture the elite athletes of the future and promote greater mass participation in sports by making these facilities open and accessible to the general public. 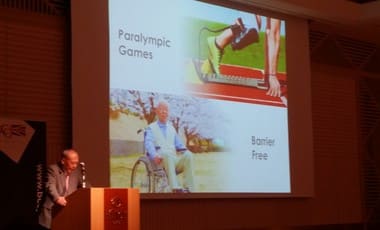 The Governor also highlighted the measures being taken to break down language barriers including the installation of digital signage with interactive screens in public buildings and new multi-language LCD displays on public transport. The city of Tokyo also supports a free translation app for 29 languages, targeted at international visitors, and some 35,000 “Omotenashi” volunteers will be on hand to help visitors across the city by 2020, the speaker explained.

“We also plan to repurpose venues to create more recreational spaces in the city for cultural events and youth education, so that people of all ages can enjoy them for decades to come.”

The Mori Memorial Foundation Global Power Index Ranking, which assesses cities according to their “magnetism” gave Tokyo the #1 rating in its economy category last year. However, Governor Masuzoe emphasised the importance a work-life balance for the city and expressed his desire to promote a more inclusive Tokyo where people can enjoy fuller, more balanced lifestyles.

As a way to achieve this, the speaker emphasised the need to provide greater support to working mothers as well as promoting equal-opportunity employment. “We are offering incentives to companies that promote healthy work-life balances for their employees and are encouraging them to hire 15,000 contract workers as permanent, full-time employees over the next three years.” 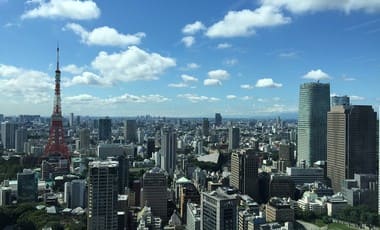 In line with a vision for a barrier-free Tokyo, the Tokyo Metropolitan government also plans to take the lead nationally to support a wider range of employment opportunities for people with physical and mental impairments.

To further improve the quality of life for residents, Governor Masuzoe outlined plans to de-motorize Tokyo by 2020 by pedestrianizing sections of central Tokyo and expanding the network of cycle lanes to 264 kilometers, encouraging people to commute by bicycle. He also announced plans to transform Tokyo into the world’s first “congestion-less city” by upgrading the 3-ring expressways which encircle Tokyo and directing thru-traffic around the city.

“Overarching all our transport policy is our broader vision to leverage hydrogen fuel cell technology to eliminate CO2 emissions and create a new “hydrogen-based society.” The Tokyo Metropolitan government has set aside 40 billion yen (353 million USD) to support the adoption of hydrogen-powered cars and fuelling stations to support them. By 2030, we aim to have a network of 150 fueling stations, with 200,000 (two hundred thousand) fuel-cell vehicles in operation.”

Governor Masuzoe, who was impressed by London’s use of rivers, canals and waterways, said that the Tokyo Metropolitan Government is now upgrading river ferry facilities, and adding new routes on Tokyo’s impressive waterfront. Other pluspoints for livability in Tokyo, said the speaker, are Tokyo’s ranking as the gourmet capital of the world (with the most Michelin-starred restaurants worldwide) and its first place position in The Economist’s Safe City Index.

The Governor concluded by reiterating the commitment of the Tokyo Metropolitan Government to making Tokyo the most business-friendly city in the world, firstly, by offering market entry support to businesses new to Tokyo and Japan. Secondly, by better positioning Tokyo as a regional and global hub, and thirdly, to promote better education and quality of life to encourage the best professional talent.

This exclusive event was made possible by the European Business Council (EBC) in Japan and Philips Japan, organised by the BCCJ, and co-hosted by the following EU Chambers of Commerce in Japan: