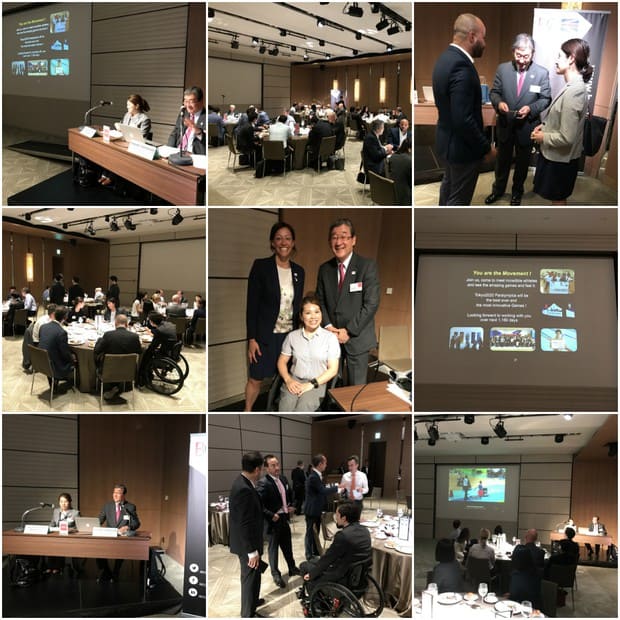 At a joint awareness-raising event on 2 June 2017, the BCCJ and ACCJ welcomed Mr. Yasushi Yamawaki (President, Japan Paralympic Committee) and Ms. Eri Yamamoto-MacDonald (Project Manager), both from the Nippon Foundation Paralympic Support Center, to talk about the power of parasports, how to better engage the public and commercial partners through parasports experiences, and how the Paralympics showcases human strength and achievement by focusing on ability and not disability.

After networking and lunch, Mr. Yamawaki opened the event by highlighting three key messages in promoting the 2020 Paralympics:

The speaker praised the London 2012 Paralympics promotion in communcating these messages and in transforming public perception, illustrating with the video broadcast on Channel Four, the official British broadcaster of the Paralympics. Video HERE

Yamawaki gave an overview of the history of the Paralympics, informing the audience that it is now the third largest sporting event after the Olympics and FIFA World Cup, and that “it is the number one sporting event for driving social inclusion.” He added, “The Paralympics movement has become a global network and continues to excite and inspire the world.”

Yamamoto-MacDonald addressed the importance of legacy. “On the one hand, we must ensure tangible legacies such as securing a barrier-free environment, and on the other, we must focus on intangible legacies, which means changing attitudes, creating an inclusive society, and taking care of the elderly in an increasingly aged society.”

The importance of education

Yamamoto-MacDonald highlighted the importance and effectiveness of education in transforming perceptions, and spoke about the work of The Nippon Foundation Paralympic Support Center in cooperation with NEC Corporation in launching an inclusive communication programme, the ‘Asuchalle Academy’, an educational initiative for young students and adults whereby instructors with impairments deliver lectures to help people understand more about people with disabilities and to help change current attitudes about disability in Japan.

2) What is disability? It is not an individual affliction, but a concept defined by society. Thinking can change by embracing diversity.

3) Recognise your potential, reach your goals, and have courage to challenge the status quo regardless of disability.

4) Believe in the power of dreams and learn directly from the experiences of para-athletes the importance of realising your goals.

“The Asuchalle team works together with school children in Japan to introduce to them the diversity of parasports and the talent and determination of the athletes who practise them. Through direct experience of parasports such as wheelchair basketball and goalball for the visually impaired, children not only gain insights into a new world of thrilling sports, but their attitudes towards disability are transformed as they develop completely new perspectives about society and human potential.”

Yamamoto-Macdonald also highlighted an issue which she believes to be specific to Japan – the unwillingness of people in the city on trains or in offices to recognise the different needs of people with disabilities. “People here will occupy the elevator and leave me waiting, while they could easily take the stairs. People’s priorities in this area need to change!”

Yamamoto-MacDonald called upon companies to introduce internal initiatives, motivating and engaging employees to participate in sports events, the way sponsor companies such as BT, Cadbury, Deloitte, Hogan Lovells and Sainsbury’s have so successfully done in the past. She emphasised that staff involvement results in increased awareness and morale, improved communication and personnel relations, and often a greater sense of identity among those with disabilities.

“Corporate engagement should not be viewed as a responsibility, but an opportunity!”, she said.

In the subsquent Q&A session, the audience asked many questions covering topics such as ticket sales, adult education, the accessibility situation in the city of Tokyo, and how best to support Paralympians.

In conclusion, both speakers called upon BCCJ and ACCJ members to become involved in the Paralympics, either through a company or individually. “The Paralympic movement is your movement!”

We believe diversity to be vital for the future growth and sustainability of the Japanese and global economy. In the run-up to the Tokyo 2020 Olympics and Paralympics, the BCCJ supports the British Paralympic Association and organisations in Japan to collectively harness the positive momentum of the Paralympic Games and the success of the athletes to change societal attitudes to disability.

Photos of the event can be viewed on BCCJ Flickr HERE