Written by Sterling Content
May 11, 2017
Past Event Round Ups 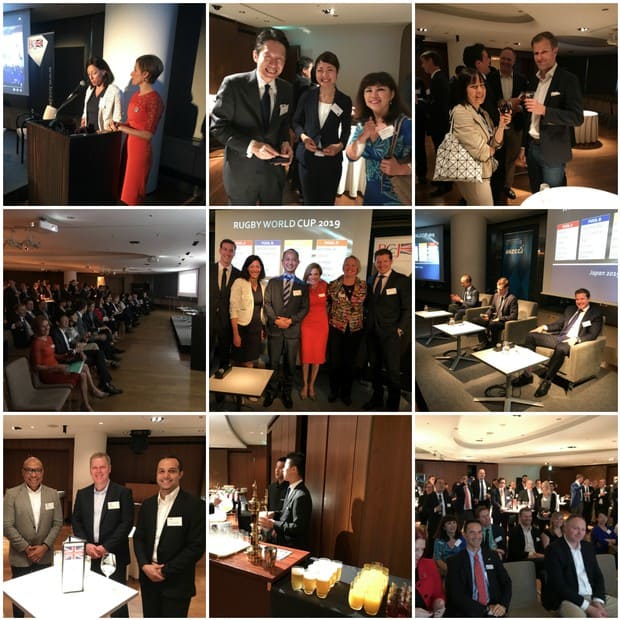 Written by Sterling Content
May 11, 2017
Past Event Round Ups

On 10 May 2017, the BCCJ and ANZCCJ co-hosted the latest in a series of Global Sporting Events, showing a recorded screening of  the 2019 Rugby World Cup Pool Draw followed by an analysis by an expert panel on the allocation, teams, and opportunities for business.

At 17:00 on 10 May 2017, the 2019 RWC pool allocation draw took place at the Tokyo State Guest House. The draw sparked great excitement and momentum both in Japan and throughout the global rugby community as the event marks the start of planning by teams and fans for the Rugby World Cup 2019 experience. The 2019 Rugby World Cup will run from 20 September to 2 November.

Alongside Prime Minister Abe and those who conducted the draw itself were World Rugby Chairman Bill Beaumont; Steve Hansen, head coach of reigning champions New Zealand; Saori Yoshida, a champion wrestler and one of Japan’s greatest Olympians; Fumiko Hayashi, Mayor of Yokahama City where the final will be held; and Yoshihiro Sakata, Japan rugby legend.The head of the Host City Council for Japan 2019, head coaches and other high-profile representatives of the 12 directly qualified teams were also in attendance.

To celebrate the occasion, BCCJ and ANZCCJ members and guests gathered on the 51st floor of Roppongi Hills Mori Tower at the Roppongi Hills Club, exchanging views and discussing potential scenarios whilst enjoying drinks and food with a spectacular view over the city.

At 18:30 guests were shown a recorded screening. As the draw unfolded, anticipation gathered momentum with audible gasps and cheers from members. The results delivered some exciting fixtures:

The results play a large role for business services such as hospitality, ticketing, tours and travel. Which games will generate the most excitement and therefore the largest crowds? How will lower interest games be received in large metropolitan areas, and what opportunities can they bring?

To find answers to these questions, the executive directors of the BCCJ and ANZCCJ introduced Julianne Merriman, Trade Commissioner for Austrade in Tokyo and the leader of Austrade Japan’s Tourism and Sport, Food, Beverage and Agribusiness teams, who facilitated the panel discussion.

David MacCallum who is originally from the Gold Coast in Australia, is currently based in London, and will soon to move to Tokyo.

He previously worked with IMG for the opening of the new Wembley Stadium in London, was Sales Director for the Open Championship golf, and more recently with the STH Group working on the VIP Hospitality programme for London 2012 Olympic Games and Rugby World Cup 2015.

David is now focussed on the set up of the commercial department of the newly formed company STH Japan, a joint venture between STH Group and JTB  working on the Rugby World Cup 2019 exclusive official hospitality, travel and accommodation programme.  He is also consulting with Tokyo 2020 regarding the possibility of an official VIP Hospitality programme for the Olympic Games.

Sam Pearson, originally from New Zealand, has been working in sports business in Asia Pacific for the past 10 years.

He has experience working with sports rights holders such as the Beijing 2008 Olympics, the WTA Tour and the FIFA U-20 World Cup, where his area of focus has been on the commercial side in marketing and sponsorship.

Sam is currently working for CSM Sport & Entertainment, a leading global sports agency with a wealth of relevant experience from the 2015 Rugby World Cup in England.

Yuji Honda started working with the RWC2019 Organising Committee part time in 2012, and later became involved as Head of Planning & Integration in 2014.

As planning progressed, he took on the responsibilty for co-ordinating post-tournament plans as Head of Strategy & Legacy. He regularly communicates with Japan Rugby Football Union and the twelve Host Cities to enhance cohesion and promote relations with overseas businesses.

All three panelists expressed their excitement about Japan as the host nation. “This world cup will have a strong Japanese flavour to it. It is a unique country with a unique culture and it is going to be a very different event. The Japanese pride in hosting the RWC is already shining through, and the images are powerful. It’s going to be incredibly exciting!” said Pearson

The panelists began by observing some of the challenges facing Japan as the host nation.

Honda emphasised the necessity for a solid and sustained lead-up strategy which considers the long-term positive outcomes for local communities and strives to deepen the grass-roots rugby fan base across Japan.

He also conceded that Japan faces some challenges as it is still a growing rugby nation with relatively little large-scale event experience. “We are working hard on increasing anticipation and awareness of rugby throughout Japan.”

The speaker added that thought must be given to transport and accommodation solutions allowing fans to attend games at venues in smaller host cities without hindrance. Twelve venues around Japan will host 48 matches over the six-week tournament leading up to the final at Yokohama’s Nissan Stadium on November 2, 2019.

MacCallum highlighted the need for awareness-raising. “We need strong ambassadors, and have to create buzz around rugby and hospitality. Making the corporate market aware of the advantages is extremely important. This means knocking on doors and informing people about the programme.”

Pearson emphasised the importance of the fan experience and the influence of sports marketing. “We need to grow the game, increase popularity among the Japanese audience and focus on how brands can connect to the fan experience”. Pearson also pointed out the exciting potential of new technology. “The technological factor for this RWC is so much more advanced; VE, AR, new apps – there are so many opportunities out there.”

When asked about their predictions about which games to watch, Honda said, “I’d be surprised if Georgia beat Wales”, and said he foresaw a final between Ireland and Australia.

MacCallum said he saw great games in Pool A and said, “The way Scotland has been playing, they could beat Ireland.” As for the final, he predicts England vs. New Zealand. “Eddie keeps them on their toes!”.

Japan has never beaten Ireland or Scotland in its history. The Brave Blossoms have lost to Scotland three times at the World Cup — including a 45-10 defeat at the 2015 tournament in England — and Ireland twice, but Pearson remains confident that with such a strong coach “Japan will win!”. Japan, which will become the first Asian country ever to host the competition, has appeared in all eight previous cups but has never made it past the first round.

The organisers hope to release a full match schedule in September, with tickets going on sale as early as the new year.

In the subsequent Q&A, the panel was asked questions about the importance of collaboration and knowledge-share; accommodation, transport, and venue management; building a meaningful and lasting legacy for Rugby in Japan; cultural engagement and regional activation; deepening the grass-roots rugby fan base across the entire nation; involving clubs, schools, and young people; and the role the corporate sector can play in terms of both financial and non-financial contributions.

The panel’s optimism and enthusiasm was palpable. All three believed that Tokyo would seize every opportunity the 2019 RWC will bring, rise to the challenges, and leave a positive legacy for Japan’s young people and communities.

“The British Chamber of Commerce in Japan supports the interests of its members, along with the organisers of the 2019 Rugby World Cup 2019, and the 2020 Olympics & Paralympics, to achieve the best possible organisation, business and community results before, during and after the events.”

Since 2012, the BCCJ has been delivering an events programme that underpins this mission, supporting knowledge-transfer between London 2012 and Tokyo 2020.

To learn more about the pool draw and for updates, visit the Rugby World Cup Japan 2019 website.