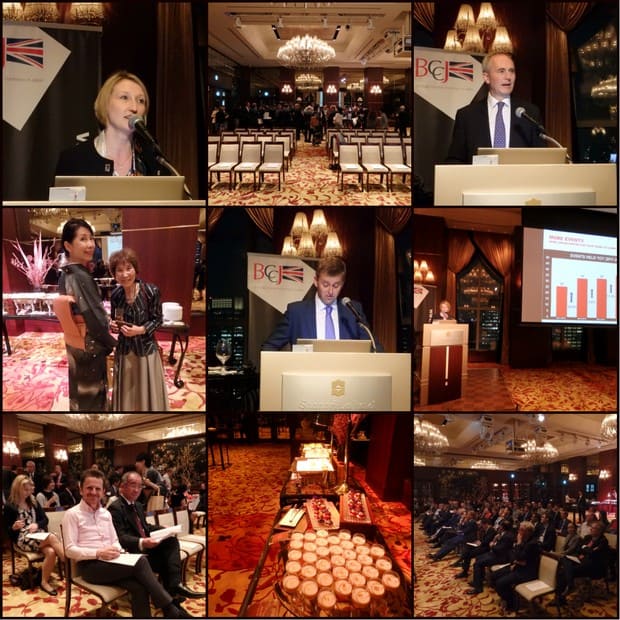 Held at the Shangri-La Hotel Tokyo, the meeting was opened by HM Ambassador to Japan Tim Hitchens CMG LVO, who highlighted the successes enjoyed by the BCCJ and its member firms over the past year. The Ambassador acknowledged specifically the work done by BCCJ members in support of UK-Japan sports relations, and said that the British Embassy and UK Trade and Investment were delighted to continue collaborating with the BCCJ on projects related to the 2019 Rugby World Cup and the Tokyo 2020 Olympics and Paralympics.

BCCJ Vice President Jonty Brunner was next to the stage, and on behalf of 2015-2016 President David Bickle gave remarks on the past Chamber year. Jonty thanked the current Excom, the BCCJ office team, the Chamber’s independent auditors, Okamoto & Co. He also made special mention of Graham Davis, former head of Events, and head of Global Sporting Events, who will be stepping down after serving 8 years on Excom. And he paid tribute to HM Ambassador Hitchens for his support of the BCCJ during his time in Japan.

The President’s formal annual report was presented by BCCJ Executive Director, Lori Henderson MBE, who outlined how the Chamber has increased business links and networking opportunities for all members in Chamber year 2015-2016. This has included hosting a record-breaking 45 high-value events, welcoming around 2650 attendees, with a higher proportion of non-members and female participants attending BCCJ events than ever before. Henderson further explained that BCCJ membership numbers have continued to grow, 10.1% increase year-on-year, to “just shy of 900 members”.

She also reiterated the Chamber’s ongoing commitment to connecting members with community and business opportunities surrounding the 2019 Rugby World Cup and the 2020 Olympic and Paralympic Games.

The Chamber continues to engage members through 9 communication channels; traffic on www.bccjapan.com and social media followings have increased year on year. Still on the theme of Communications, special thanks were given to the BCCJ Excom Membership taskforce for producing printed marketing material (brochure and Member Gets Member leaflet), to help the Chamber expand its reach over the coming months and years.

Henderson also highlighted the BCCJ’s Community activities, including the continued delivery of the Books for Smiles programme, w

hich has now raised over JPY8.9m to support Japan’s careleavers into higher education and jobs.

Confirmation of the 2016-2017 Executive Committee

The nomination period for the BCCJ 2016-2017 Executive Committee (Excom) and Presidential elections opened on February 22. By the nomination deadline, March 25 at 1700, we had received 15 nominations that met constitutional guidelines. Under the Chamber constitution, the Excom is run by a minimum of 12 and a maximum of 15 individuals. Since the number of candidates this year did not exceed 15, no election was necessary and all candidates were approved.

Chris Heffer (Director of UK Trade and Investment at the British Embassy Tokyo) and Matt Burney (Director of the British Council, Japan) will continue to represent their respective organisations as ex-officio members of Excom.
Excom taskforce heads will be decided in the coming weeks.

David Bickle, of Deloitte Touche Tohmatsu, was elected by acclamation as Chairperson of the Executive Committee and President of the BCCJ for a third term.

The new committee, statement of accounts, and appointment of auditors (Okamoto & Company) were all approved unanimously.

During the question and answer portion, a question was raised regarding the BCCJ’s position on the forthcoming EU referendum. The BCCJ Executive Director said that the Chamber takes a neutral position. However there will be a poll of BCCJ members in the lead up to the referendum (June 23 2016), as well as a related BCCJ on June 14, led by HM Ambassador to Japan, Tim Hitchens. Chris Heffer, Director of UK Trade and Investment at the British Embassy Tokyo reminded the audience that they could register to vote in the Referendum, online. REGISTER TO VOTE HERE

Thank you very much to all who joined the AGM last night, and to the team at the Shangri-La Tokyo.

Thank you also to Steve Dewire, General Manager of the Grand Hyatt Tokyo, whose donation on the evening took us beyond JPY9m total for the BCCJ’s Books For Smiles programme.

Supported by the 2016-2017 Excom, we look forward to an active and exciting Chamber year ahead!